Had there never been a COVID-19 pandemic, BYU would have played its most important game of the year against Utah in its season opener, faced five opponents from Power Five conferences in the first six weeks and quite possibly gone into October without a national ranking or significant goals to play for.

That’s generally how it’s gone for the Cougars since declaring independence from the Mountain West Conference in 2011, a project born of ambition bordering on delusion.

“There are BYU fans who feel like, ‘Hey let’s play a tough schedule,’” said Jarom Jordan, the co-host of BYU Sports Nation on BYUtv, the school’s in-house television network. “I’ve been on this hill saying why? It’s too much for almost anyone, let alone BYU.” 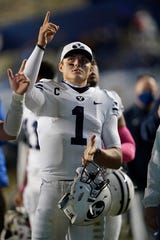 The debate over whether BYU’s scheduling strategy as an independent should more closely mirror Notre Dame or tilt toward a lighter load has been raging for years among BYU fans, who are some of the most intense and knowledgeable in all of college football. As Jordan sees it, his side has been vindicated by the accidental circumstances surrounding this season.

With a schedule cobbled together off the scraps of limited availability from teams in the Group of Five conferences, BYU has risen to No. 9 in the Amway Coaches Poll and enters its showdown against No. 23 Boise State on Friday (9:45 p.m., ET, FS1) with a 7-0 record. Should the Cougars win, they’d be favored to win their last two games, which might be enough to get them into a New Year’s Six bowl game and secure their first top-10 finish in nearly a quarter-century.

Make no mistake: BYU is a very good team with a quarterback in Zach Wilson who has captured the imagination of NFL scouts this season and could very well factor into the Heisman Trophy discussion.

But the fact BYU’s record, and to some extent its national acclaim, is also the product of a soft schedule has brought renewed focus on what kind of program fans actually want the Cougars to be.

“It’s fun being relevant,” said Matthew Best, a lifelong BYU fan and alum, who lives about 10 minutes from LaVell Edwards Stadium in Orem, Utah. “We normally play a pretty tough schedule and haven’t been part of the national conversation much. This year we are part of the conversation.”

For BYU fans, much of the angst can be traced back to two seminal moments in the school’s history: winning a national championship in 1984 and the conference realignment of 2010 when rival Utah got invited to the Pac 12 and the Cougars were left with a menu of unappetizing options. Those events are inextricably linked.

With an undeniably rich history of success and a fan base that literally extends across the world due to its affiliation with the Church of Jesus Christ of Latter-day Saints, getting left out in the cold while Utah got promoted to the Power Five was unacceptable for BYU fans and administrators. Instead of settling for a diminished Mountain West, BYU struck a lucrative deal with ESPN that would allow the Cougars to play football as an independent with lots of television exposure and the ability to schedule high-profile opponents. In essence, BYU has spent the last decade trying to keep up the appearance of being a national power while lacking the money or the access to the College Football Playoff it would have in a Power Five conference.

“I like seeing them play top competition because that’s who BYU wants to be,” said Dustin Chapman, who grew up in Ogden, Utah, listening to football games on the radio while working on cars with his father. “They want to be a recognized as a Power Five school, maybe not quite (at the level of) Notre Dame but they want to be in that group and feel like they have the pedigree to do that. It’s probably not likely they’ll get into a Power Five conference, so this is the road to go.”

But the competitive price for going down that road is steep: The Cougars start every season facing the most ridiculously front-loaded schedule in the country. Just last year, BYU opened with Utah, Tennessee, Southern Cal and Washington before finally getting a “breather” on the road against Toledo. In 2018, BYU played Arizona, California, Wisconsin, and Washington all in September. The year before that, their first month included LSU, Utah and Wisconsin.

Nobody else chooses to schedule that way because it’s insanity. Even if BYU performs well in September — and they have won several of those games — they’re fortunate to go into a typical October with a .500 record, not to mention the physical wear and tear sustained by playing those types of teams and the general sense there’s not a ton of suspense remaining in the season other than whether they can squeak into a minor bowl game.

“Without a conference the only way to quantify relevance is being in the top 25,” Jordan said. “So how do you get in the top 25? Even if you go 2-2, it’s hard to sustain that. I believe BYU is a Power Five quality program and in a good year probably in the upper crust, but in order to really make a statement, BYU needs a model that probably suits them better. BYU has chosen to go with playing 5-to-7 Power Five teams a year, and that’s why they’ve only won 18 games the last three years. This is validating my argument: What happens when BYU plays a winnable schedule? They’re in the top 10 and at the forefront of every conversation.”

Everyone understands this year is an extreme outlier. Because teams in the Big Ten, SEC and Pac 12 decided not to play non-conference games, BYU went from a schedule that would have started with Utah, Michigan State, Arizona State, Minnesota and Missouri in the first six weeks to a schedule in which Navy, Army and Houston were the marquee games up until this week.

And BYU has been dominant against that schedule, amassing an average victory margin of 31 points. Only one game, against Texas-San Antonio, has been within one score. That’s given BYU fans a fresh perspective on what life might be like if the school took a different approach.

“Long term, this year has been fun, but I wouldn’t want it to be the new normal,” said Chad Cluff, a fan from Eagle Mountain, Utah.

None of these issues are easy to balance. For a lot of reasons, including continued television cachet and credibility, BYU has to play some tough games. And those aren’t always easy to schedule, as the pool of Power Five programs willing to play a quality non-conference opponent like BYU in October and November isn’t that big in any given year.

But next season, for instance, BYU is scheduled to open with three Pac 12 opponents and then face Baylor, Washington State, Virginia, USC as well as Boise State later on. The likelihood of another 7-0 start and appearance in the top 10 seems pretty distant.

“BYU’s philosophy has always been we want to play the best teams in the country, the best teams we can get so we know where we stand,” said Rachel Konishi, a lifelong BYU fan and graduate who lives in Salt Lake City.

Right now, regardless of the competition, BYU is standing pretty tall with one big test to pass this Friday. It may not be the plan or the philosophy that the school or its fans wants to execute for its football program. But in this one-off, unusual year, it sure has been effective.