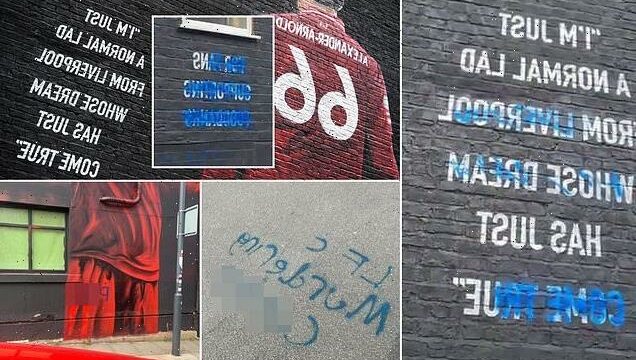 Murals including one designed to promote foodbanks in Liverpool have been defaced with blue graffiti and vile slurs on the day of the Merseyside derby.

Shocking footage shared by Andy Heaton, who works on The Anfield Wrap podcast, shows a mural of Trent Alexander Arnold has been vandalised with blue spraypaint, including the letters ‘EFC’ and other graphic imagery.

Another depicting Liverpool star Mohamed Salah has been targeted with a racial slur.

Across the street, a mural dedicated to Liverpool’s 2-1 victory over Leeds in the FA Cup final at Wembley, featuring legendary former Reds forward Ian St John, has been covered with blue paint and nasty insults.

The mural of Alexander-Arnold was unveiled in August 2019 and includes the message: ‘For Fans Supporting Foodbanks.’

It highlights the work of Fans Supporting Foodbanks, an initiative that started in North Liverpool and is based before every game on that very street where the mural was placed. 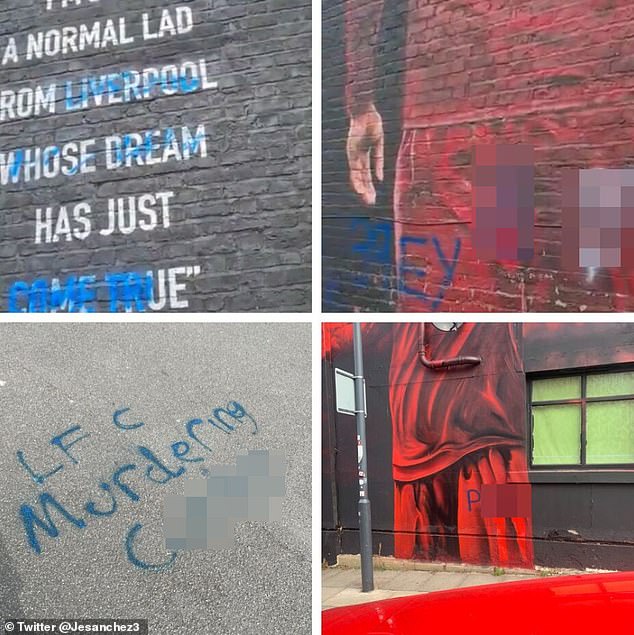 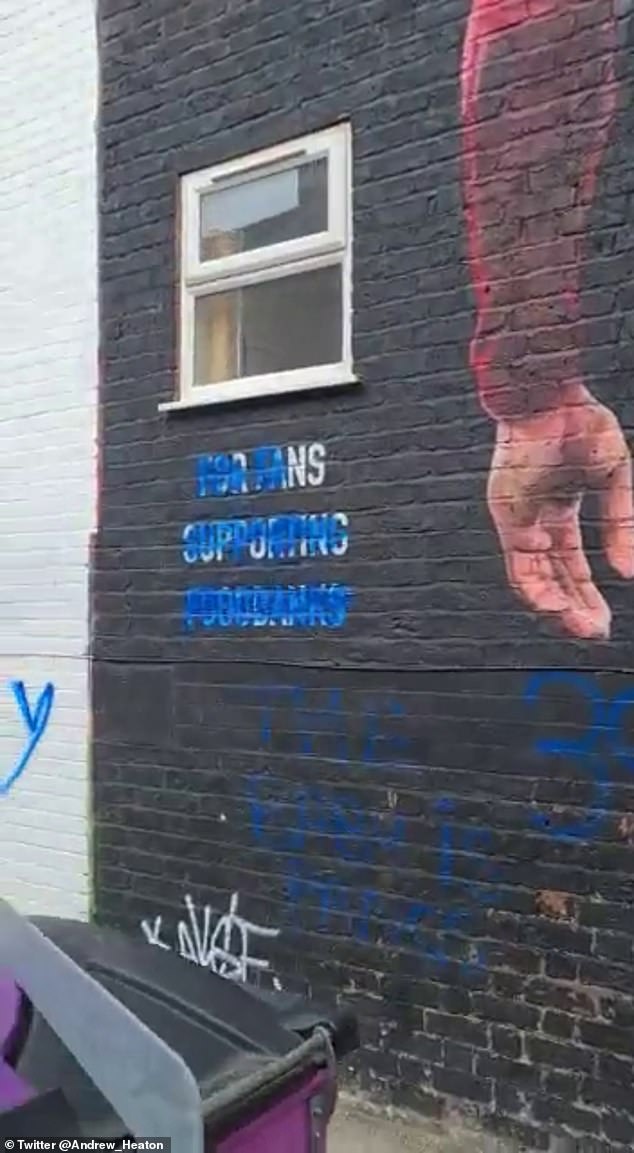 A mural of Trent Alexander-Arnold, designed to promote foodbanks, has also been targeted 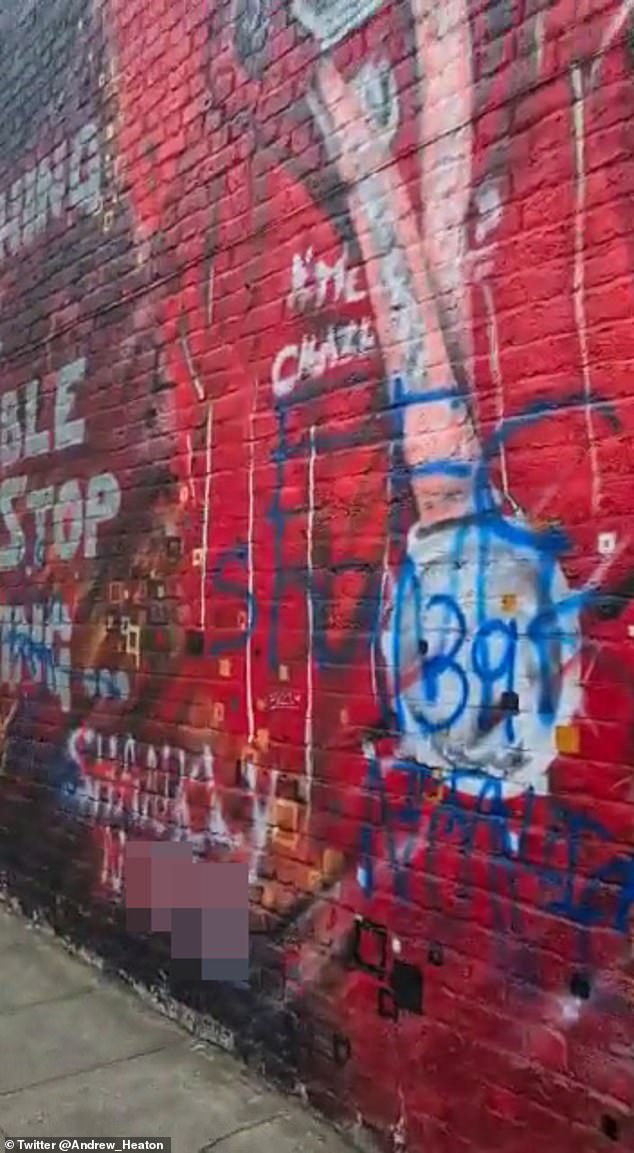 Fans condemned the vandalism of the murals on social media. ‘Imagine defacing a mural commissioned to celebrate and promote @SFoodbanks, a vital initiative that supports local families and is ran and supported by fans of both clubs?’ Heaton wrote on Twitter.

Former Liverpool defender Jose Enrique laid the blame at the feet of Everton fans. ‘Look what some Everton fans have done to our murals,’ he said, before adding an angry face emoji. 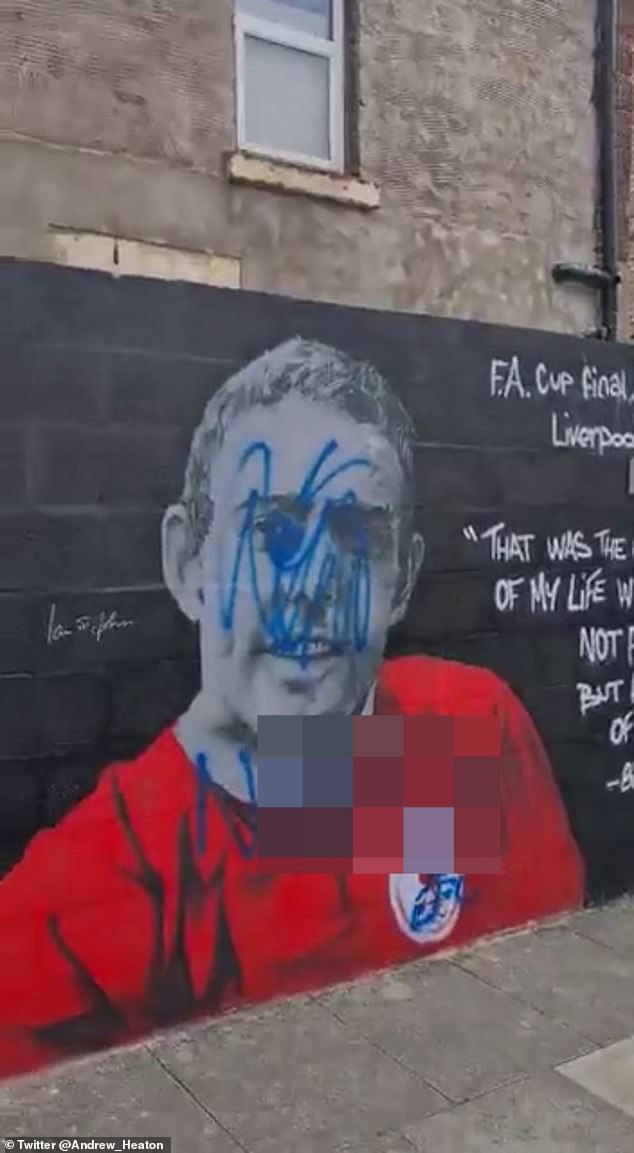 Another fan, @pincher1878, wrote: ‘Disgraceful can’t condone this,’ while @ErinNYC1975 said it was ‘disgusting and heartbreaking’.

@DStanistreet agreed that it was ‘disgusting behaviour’ but said that ‘sadly both sides as bad as each other. Everton memorial wall defaced with LFC posters’.

Social media users also slammed the racist message aimed at Salah. ‘Just goes to show that the racists are also the ones with an IQ of 3,’ said one fan.

Another added: ‘Typical @Everton behaviour…not surprised in the slightest. Will be no mention by the club either which just reinforced their disgusting behaviour. Vile bunch.’