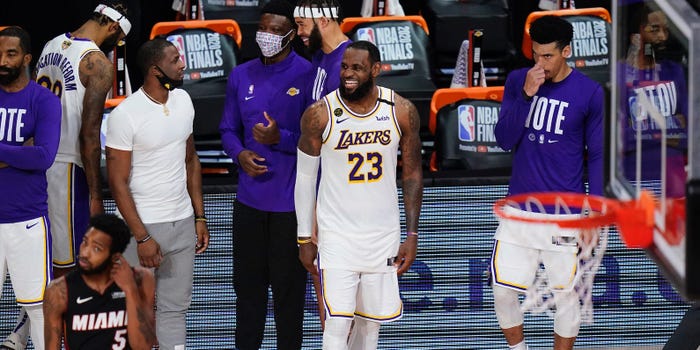 While winning the 2020 championship was a meaningful accomplishment for the Los Angeles Lakers, LeBron James says he feels for his teammates who didn't get the typical experience.

James and the Lakers won the championship in the Disney bubble which, of course, did not have fans. The Lakers didn't get to go out and celebrate after (they celebrated at a restaurant on the Disney campus) and didn't get to have a parade in Los Angeles.

Speaking on the "Road Trippin'" podcast, James sad he feels badly for his teammates for whom it was their first championship.

"I feel bad for my teammates — my first-time championship teammates," James said, naming players who hadn't won a championship before.

He added: "They don't understand the power of a championship celebration. From the partying, one, to the parade, and then back to the partying. We have not been able to do that. It burns me because, as a champion, you should feel that."

James said the locker-room celebration immediately after winning is "amazing," but it goes quickly.

James has expressed his desire to celebrate the championship on social media, suggesting the Lakers and World Series-winning Los Angeles Dodgers hold a joint parade with masks.

Former NBA player and ESPN analyst Richard Jefferson noted that while some people had discounted the accomplishment because of the unusual circumstances in the bubble, he noted that it was also more difficult than a typical championship because there was no home-court advantage.

James referenced the Cleveland Cavaliers' 2016 championship over the Golden State Warriors, saying they wouldn't have won it without a series-tying win in Game 6 in Cleveland.

"If we're down 3-1 in '16, and we're not going back to Cleveland, we're just playing another game in the bubble? Golden State may have beaten us by 100," James said.

James called playing without fans in the bubble "eery."

The Lakers will begin the 2020-21 season without fans. Kyle Goon of the OC Register reported that the Lakers planned to do a ring ceremony on opening night, but wait until fans could go in Staples Center to raise a championship banner.

"Laker Nation, I and the rest of the group, guys, miss you guys so damn much," James said.

Watch video of the podcast below (James' comments about the championship celebrations begin at (24:49).