England crumbled to a shock 151-run defeat in the second Test against India after a dismal showing from the home side on the final day at Lord’s.

Set 272 to win in just under two sessions, England’s fragile batting line-up were bowled out for 120 in 51.5 overs by a fearsome Indian fast bowling unit; earlier Mohammed Shami (56no) and Jasprit Bumrah (34no) wrestled the game away with an explosive, unbroken 89-run stand for the ninth wicket to set up a declaration.

The writing was then on the wall for England when openers Rory Burns and Dom Sibley were both dismissed for ducks inside the first 10 balls of the innings. In-form skipper Joe Root tried his best to rally the team, playing nicely for his 33 before he was the fifth wicket to fall to the third ball after tea.

Sam Curran suffered the ignominy of becoming the first player ever to bag a king pair at Lord’s, but Jos Buttler (25) – who was dropped by Virat Kohli when on two – hung around for 96 deliveries in a desperate attempt to save the Test before succumbing to the brilliant Mohammed Siraj (4-32), who bowled James Anderson to wrap up victory.

It had been England who actually started day five as slight favourites, trailing by 154 and only needing a further four wickets from India’s long tail to bowl the touring side out. But, in an astonishing morning session, Shami and Bumrah took the game away.

Shami smashed six fours and a six as he hit his highest-ever score and only his second half-century in his 53 Tests, while it was only the third time in his 33 Test innings Bumrah had reached double figures with the bat.

When Ollie Robinson (2-45) dismissed the dangerous Rishabh Pant (22) in just the fourth over of the day – a routine nick through to Buttler – England could have been forgiven for thinking they had seen off the biggest threat to their hopes of victory.

Ishant Sharma (16) was a source of frustration for a few overs of agricultural bat swinging before Robinson too picked him up, lbw to a knuckle slower ball. But England then lost their way.

Anderson was taken out of the attack after just a three-over spell, England too eager to resort to bowling short and ultimately wasting prime overs with the second new ball as a result.

Bumrah, who had a few heated exchanges with the England fielders off the back of his own bouncer barrage to Anderson on the third evening of the Test, received the brunt of the short-pitched tactics, but took it on – not always in the most attractive of manner, but mightily effective.

Wood, troubled by a shoulder injury picked up in the field the previous evening, was still able to bowl quickly, though there were one or two scares as he fell in his follow through, and he failed to carry the same threat as earlier in the innings.

As Bumrah and particularly Shami progressively got their eye in, and with Root pushing the field back, India’s hold over the game only grew stronger – the lead moving beyond 200, the fifty partnership coming up and Shami hammering Moeen Ali for six to reach his half-century. 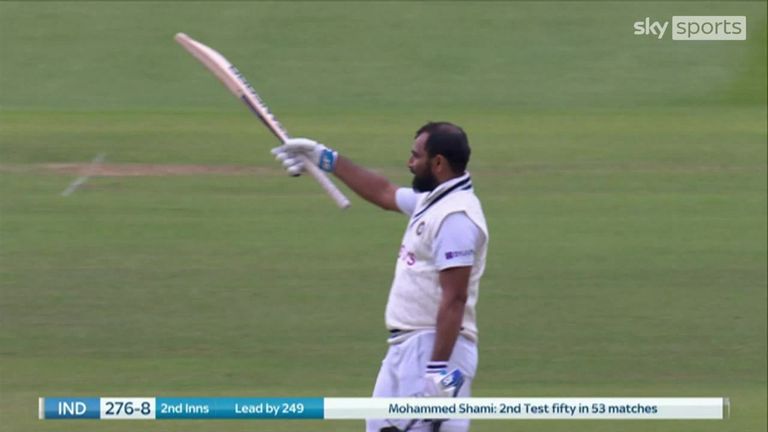 With three further boundaries scored in the first nine deliveries after lunch, Kohli was content to declare on 298-8, setting England an unlikely target of 272 in 60 overs. And any vague notion that the hosts might go after it was swiftly extinguished as both Burns and Sibley departed without troubling the scorers,

A pumped-up Bumrah (3-33) picked up Burns third ball, getting one to jump up off the surface slightly and take a leading edge to Siraj at mid-off. Sibley, meanwhile, did well to even feather an edge through to the ‘keeper off an unplayable delivery from Shami (1-13) – England reeling at 1-2.

Haseeb Hameed, on a king pair himself, was understandably shaky to start his innings and was dropped on four by Rohit Sharma at second slip off Shami. Encouraged by his captain at the other end, Hameed gradually began to settle, but just as he and Root approached their fifty stand, he was pinned lbw for nine by an in-ducker from Ishant (2-13). 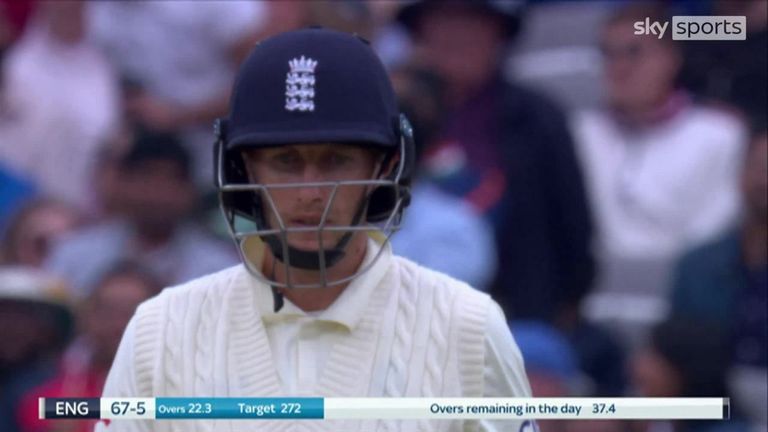 England’s outlook got infinitely worse as Jonny Bairstow (2) and Root fell in the space of four balls either side of the tea interval, the former another to be trapped in front by Ishant – this one given by DRS after being reviewed by Kohli – and Root edging Bumrah to the giddy Indian skipper at slip.

Kohli’s mood was dampened a touch as he dropped Buttler on two off the same bowler a few overs later. The England wicketkeeper and Moeen then hung on in there for approaching 16 overs of the evening session, in the face of some superb, skilful fast bowling – only for two wickets to fall to consecutive deliveries.

Siraj found himself on a hat-trick as he got Moeen (13) nicking off to first slip – no mistake from Kohli this time – and Curran’s sorry Test ended with another first-baller, edging behind. 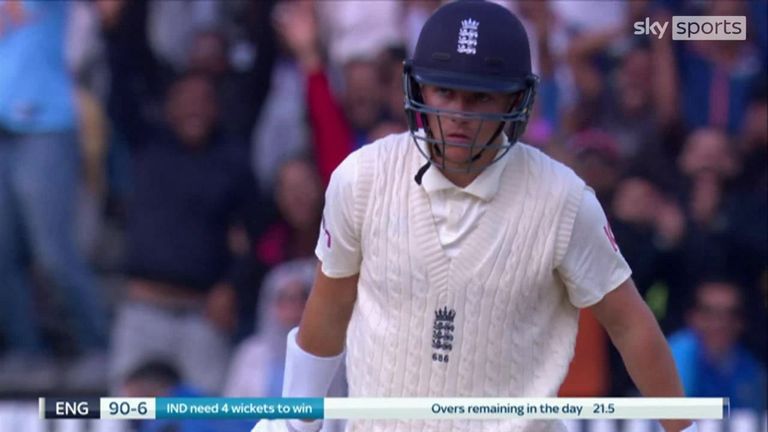 Robinson, another to be given a hostile reception on his arrival to the crease, survived the hat-trick delivery and proved to be another willing partner for Buttler – the pair able to repel a rampant Indian attack for more than 12 overs – until the Sussex seamer fell lbw to Bumrah after another wisely-taken review from Kohli.

Inside the final nine overs of the day, Buttler was the key wicket and he was finally tempted into nicking off to Siraj, while Anderson was cleaned up three balls later to clinch a famous win for India.

Watch day one of the third Test between England and India, at Emerald Headingley, on Wednesday, August 25, live on Sky Sports The Hundred from 10am.