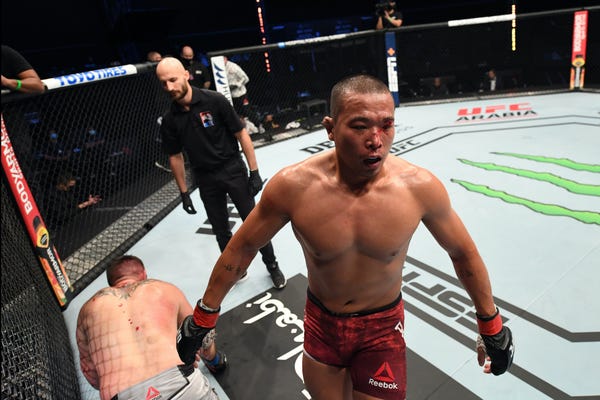 A South Korean fighter called Jun Yong Park walked out to the "Rocky" soundtrack, mercilessly battered his opponent, and shattered a UFC record because he was so dominant.

John Phillips endured the three-round, 15-minute distance of his Fight Island middleweight match with Park, which was held at the Flash Forum in Abu Dhabi on Saturday, but wouldn't have enjoyed his time on Yas Island.

Park was hit with a significant strike once for every three minutes — five in total.

In contrast, the 29-year-old asserted his game on the ground and hit Phillips with brutal hammer-fists in the first round, smothered him with punches on the floor again in the second, and continued to dominate him in the third.

Strangely, Park was bleeding at one point in the fight — a probable elbow tip to the left eye which caused an angry gash in the second round.

However, the story of the match is told in the official statistics.

On Fight Island, the UFC's ongoing combat sports festival in the UAE, UFC commentator and former two-weight champion Dan Cormier seemed to break the ESPN telestrator when trying to show the sheer amount of punching that had taken place.

Earlier in the card, Fares Ziam edged Jamie Mullarkey in a lightweight match, Maxim Grishin stopped Gazhimurad Antigulov late in the second round, and Said Nurmagomedov smacked the hell out of Mark Striegl.