When people ask me if I’ve ever hunted the great white shark using one of Clive Palmer’s turds as bait, I normally lie and say, ‘‘No’’. But some days dawn when you just have to divest yourself of your follies. Like the Ancient Mariner you have a tale that must be told.

It was the era of Jaws and I was trying to impress a girl by posing as a sort of Ahab in RMs. We planned the hunt in The Malvern Hotel. My friend’s father owned a Bertram, a prestige craft, and he talked himself up as a hardened mariner who, on the right day, would strap himself to the mast and pilot that boat into the teeth of hell.

So on a summer Saturday he and I and the girlfriend I was about to impress set out to pursue the beast. But instead of turning left from the dock, as expected, my friend, my captain, turned right. ‘‘Where are we going?’’ I asked. ‘‘Dad won’t let me take the boat out the heads,’’ he explained. ‘‘But don’t worry, I’m au fait with the playground of the great white.’’

We dropped anchor about 100 metres off the Sorrento front beach in calm water. It looked more like a creche for the plutocracy than a shark playground. A school of prepubescent Baillieus, Pratts, Myers and Foxes floated around us on lilos asking what we were doing. They seemed to me an extravagant burley.

Our skipper had been tasked with sourcing the real burley that would lead the leviathan to us. I’d imagined he would go to an abattoir. Instead, this grizzled seaman had nipped into Woolies and bought one of those football-sized Pal dogmeat sausages. ‘‘What the …?’’ I asked.
‘‘Ans, I happen to know Valerie Taylor uses this very product,’’ he told me.

Valerie Taylor was a famous blonde shark whisperer of the day. I always hoped she’d be attacked during her frolics. Not by a great white. But if a grey nurse had severed the string of her bikini in a drive-by it would’ve been cool with me. Needless to say she never stooped to use Pal as burley.

Without hope, I slit its plastic skin and extruded the giant sausage into the water. A gelatinous torpedo that raises in my mind’s eye a vision of Clive Palmer at stool, it floated there intact, an insult to our endeavours and the environment. And I remember thinking: ‘‘If I was a famished leviathan I wouldn’t swim past all these chubby Baillieu toddlers to get to that megaturd.’’

Needless to say it attracted no sharks. But using an ancient Chinese bait called dim sum I’d sourced at the last minute from a takeaway I soon hooked a Pacific gull. The bird swooped as I cast and now it had the hook in its gut and I was flying it like a kite in plain sight of Melbourne’s very best people. The girl I was impressing grew sick and went below decks. The kiddies in the water around us began to scream and bawl. Millionaires stood on the beach, fists on hips, with their gold teeth flaring in the solstice.

Optimistic in youth, I had brought a varmint rifle, a .222, on board to administer the coup de grace to our leviathan. Not ballistically adequate for a two-tonne beast really, but certainly a calibre that would dispatch a fox, or a Fox. With my Winchester I shot the Pacific gull. The gun roared, the white hull of the Bertram splattered red and the beachgoers flinched and became vociferous. 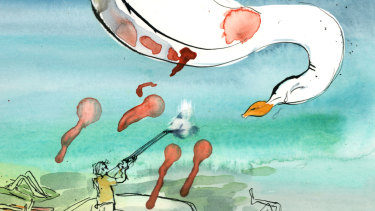 It’s recorded in the social pages of the local press that the Baillieus and Foxes have rarely seen eye-to-eye around here. In refutation I say the only time I’ve seen them en masse they were in strident accord. They linked arms along the beach, the potbellied and pre-teen alike, flower children opposing some horrible seaborne putsch. And all shouting at me.

If I were to parse and precis their tirade it went along the lines that I was a lunatic who’d better piss off quick because the water police were gunning their launch hither at maximum knots. If it was the last time those families agreed on anything I take comfort in bringing a fleeting truce to their troubles.

And even today, like that infamous mariner given to stopping wedding guests and fessing up to shooting his albatross, I must occasionally stop a stranger and tell her of the gull, the megaturd and the Baillieus.