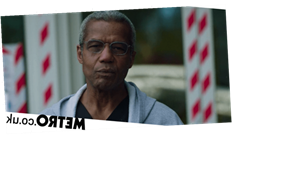 Holby City returned tonight after a three month absence caused by the coronavirus lockdown – and it returned in dramatic style, as the pandemic itself took centre stage.

The episode had a shortened running time of only 40 minutes compared to the usual 60, because Covid-safe filming takes much longer than usual, but this didn’t do anything to reduce the scope, ambition and drama of the episode that was created.

The first character we saw was Ric Griffin (Hugh Quarshie), wandering through ghostly corridors in a dreamlike sequence – or perhaps a nightmare, as the first familiar face he spotted was Cameron’s (Nic Jackman).

Back in the real world we discovered that Ric had been in a coma for two weeks following his brain surgery. As the surgery was done by a possibly drunk and definitely vengeful Guy Self, perhaps Ric had gotten off lightly – but he woke into a completely altered world where doctors and nurses were now daily ‘walking into hell,’ as Donna (Jaye Jacobs) described it.

Sights that were horribly familiar from TV reports back in March and April were now everyday reality on the wards of Holby City – staff battle-scarred from a long shift working in full PPE, trying their best to deal with a virus that little was known about. ‘This thing’s nasty,’ said Louis (Tyler Luke Cunningham) as the first younger patient succumbed to the disease.

Ric wasn’t about to stay in bed and convalesce for long and was soon in the thick of it, despite being in more than one high risk group himself. As well as dealing with patients he was also fighting with Max (Jo Martin), as he didn’t think she was doing enough to support a staff team that found themselves with out of date (or no) PPE. What he didn’t know, and we did, was that Max eventually had to resort to buying PPE herself with her own money.

Ric formed a bond with a patient from Ghana, and when she deteriorated she made him promise to take care of her baby, who was born by emergency caesarean. The mother’s dying wish was for the baby to go to its grandparents in Ghana. But Ric became ill himself as he caught coronavirus and he was gasping for air as the baby was delivered. As the baby took its first breath, Ric apparently took his last and fell into unconsciousness.

Could this be the end of an era, as Holby lost beloved Ric Griffin? Well, yes it could, though there was a further twist. What looked very much like a memorial service to him at the end of the episode turned out not to be – the staff team were assembled to remember those who’d died in the pandemic and the achievements of getting through the terrible first wave.

They were also there to say goodbye to Ric, though – now recovered and headed for Ghana with the baby. Max asked him if he’d be back and – luckily for us – he didn’t rule it out.

Among all this, Sacha (Bob Barrett) was dealing with the very recent loss of his soulmate, Essie. We’re used to seeing characters dealing badly with bereavement on Holby – think of how horrible Oliver Valentine was to poor Elliot Hope after Tara died – but because Sacha is usually Mr Nice, his callous attitude to patients and friends alike was quite a shock.

His dismissal of ‘hypochondriac’ patient Jodie Rodgers (Sian Reese-Williams) had instant and profound consequences for her. Usually we would expect her to pop up later, critically ill, and for Sacha to realise the error of his ways while saving her life.

Instead we had the far more interesting scenario of Sacha inviting a homeless Jodie to live with him – because he needed the company of someone who never knew Essie, more than out of kindness. Right at the end we saw that they’d slept together, though Sacha didn’t look like it had brought him any comfort at all while Jodie looked rather pleased.

And it’s only the start of a whole heap of trouble for Sacha that’s going to emerge in the coming weeks and promises some excellent entertainment.

Cameron found himself as front page news when a photographer spotted him slumped outside the hospital apparently bone tired after a day of life-saving heroics. What the photographer didn’t know was that Cameron was running away from a dying patient, completely unable to cope with the intensity of the situation. Ange (Dawn Steele) has her eye on him, though.

Throw in a trio of new junior doctors and Zav’s brother Alex (Miles Mitchell) joining as a HCA (a new romance for Donna, perhaps? Or at least another pair of sleuthy eyes on Cameron?) and you had a very packed 40 minutes indeed.

Sue Haasler is the author of five novels and the official BBC Holby City book, which you can read about here.