Employers have asked the national industrial umpire to let retail and hospitality workers trade their penalty rates for higher wages in a move they say will fix pay problems that new data suggests affects a third of businesses in the sectors.

The Fair Work Commission is working to simplify the awards that contain minimum pay rates and employment conditions for the sectors’ 1.3 million workers at the urging of Attorney-General Christian Porter. 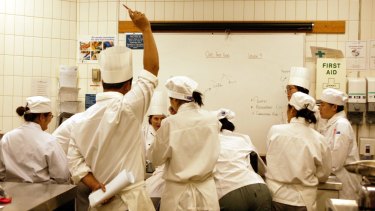 The Restaurant and Catering Association wants rules to allow chefs to be paid a flat rate.Credit:Jim Rice

Retail and hospitality employer groups say their proposal would encourage businesses to hire more workers as it would simplify pay calculations and reduce fears of being hit with underpayment claims, but Labor and unions view it as a scheme to cut pay.

In question time on Tuesday, the Opposition argued workers who traded their penalty rates for higher base wages could be up to $10,179 a year worse off under an “exemption rate” proposal advanced by retail associations.

Labor’s calculations are based on a roster from 6pm to 2am, Thursday to Monday. Workers would have to agree to the arrangement, under which they would earn about $57,000 a year.

National Retailers Association head Dominique Lamb said many workers on different rosters would earn $13,000 more a year if they took up an “exemption rate”, which would set base pay at 1.25 times the minimum rate.

Asked whether it would try to reverse the Fair Work Commission’s decision if it endorsed the retailers’ proposal, Labor’s industrial relations spokesman, Tony Burke, did not comment directly.

“Right now we are fighting to stop workers having their pay cut,” Mr Burke said, in a reference to Labor’s belief employers would use a provision in the government’s separate industrial overhaul to strike pay deals that left workers worse off.

The party confirmed at a caucus meeting on Tuesday it would vote against the proposed laws in both the House of Representatives and Senate.

Mr Porter, who is also Industrial Relations Minister, said Labor’s attack was misleading as it ignored the Fair Work Commission’s independence and claimed many workers would get a pay cut.

“Labor is not … working co-operatively with the government to help save lives and livelihoods,” he said.

The Restaurant and Catering Association has proposed a similar exemption rate, where chefs on higher pay grades could earn 150 per cent of the award rate – a minimum of $85,566 a year – in exchange for forgoing penalties, overtime and allowances.

Employer groups believe the complexity of calculating penalty rates and allowances is one of the factors behind a recent run of underpayment claims including at retail giants Woolworths and Coles, and restaurant chains run by a number of celebrity chefs.

“We believe these changes are moderate, practical and pragmatic and deliver what the industry needs to recover,” RCA chief executive Wes Lambert said in a statement.

Data from the Fair Work Ombudsman compiled for the award process shows 29 per cent of accommodation and food services businesses and 28 per cent of retailers that faced a worker complaint either had to repay money or faced other enforcement.

The Australian Council of Trade Unions will oppose the RCA’s plan.

“This proposal seeks to legalise this business model, resulting in significant pay cuts for many workers,” secretary Sally McManus said.