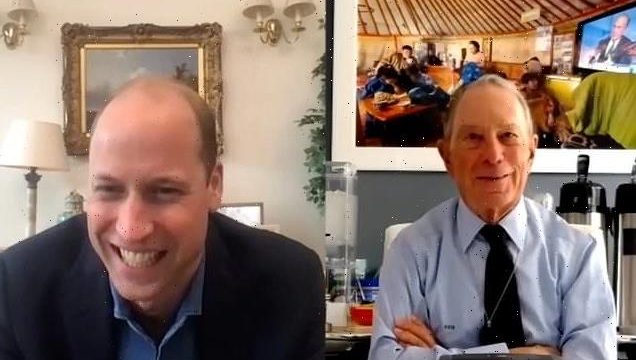 The Duke of Cambridge, 39, has co-authored a piece with the billionaire US politician, 79, for USA Today.

In the piece, he compared the current fight against climate change to the 1960s Space Race, writing: ‘This time the question isn’t whether we can reach the moon. It’s whether we can save the Earth’.

‘An hour of change and challenge is upon us again, but this time the question isn’t whether we can reach the moon. It’s whether we can save the Earth.’

He also quotes John F. Kennedy saying ‘we are behind but ready to catch up’ adding it’s ‘our turn’ to mimic the late President’s generation and ‘move ahead’. 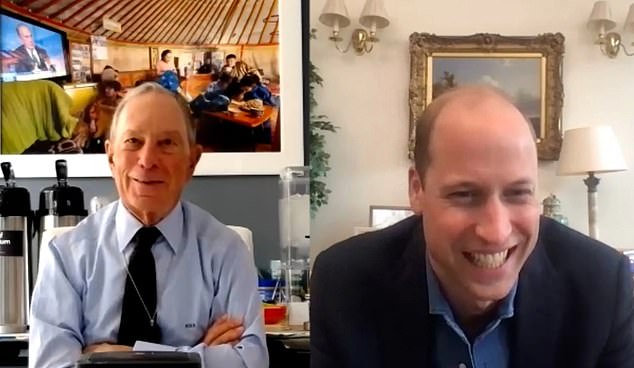 The royal has also explained how the race to put a man on the moon ‘created new jobs, launched new companies and spurred technological innovations’ and that the race to beat climate change will ‘be no different’ and ‘improve lives all over the planet’.

He writes: ‘The environmental devastation we are witnessing – including record-breaking temperatures across the world; wildfires in the American West, Turkey and Greece; historic flooding in Western Europe, the East Coast of the United States and Central China; and the drought-driven famines in East Africa – is larger than what was feared possible even a year ago.

‘For so many, simply breathing air and drinking water is now a health hazard. Many others have seen their food supplies grow scarce and their livelihoods threatened by disruptions to the climate, including in the ocean.

‘The science tells us that this is the decade to act – and that waiting is not an option. Without bold and decisive action, future generations will look back and ask: How could they advance so far in space while leaving their own planet – and their own communities – so vulnerable?’

In the new piece, William says we must match Kennedy’s ‘optimistic spirit’ and praises the Bezos Earth Fund, Bloomberg Philanthropies, the Jack Ma Foundation and the Paul G. Allen Family Foundation for their helping in sustaining and promoting  the prize.

He describes the Earthshot as: ‘A new call to action to the world: to unleash and support a new generation of invention, innovation and entrepreneurship propelled by a shared sense of urgency to address the crisis at hand and optimism that humanity can achieve seemingly insurmountable goals’.

On Saturday it was announced Prince William and David Attenborough will present a new BBC show about the environment featuring pioneers who have been recognised for finding innovative solutions to the most pressing climate issues.

In a trailer introducing the documentary, The Earthshot Prize: Repairing Our Planet, The Duke of Cambridge tells viewers ‘this is a moment for hope, not fear’.

The Queen’s grandson, who lives at Kensington Palace in London with his wife Kate Middleton and their three children, will speak with winners of The Earthshot Prize, a global competition he launched alongside The Royal Foundation in October 2020, in the five-part series.

Launched by Prince William and the Royal Foundation of The Duke and Duchess of Cambridge in 2020, and inspired by former US President Kennedy’s ‘Moonshot ‘, The Earthshot Prize is the most ambitious and prestigious award of its kind.

It aims to discover and scale the best solutions to help repair our planet over the next 10 years.

The royal is urging humanity ‘not to give up’ in the face of ‘terrifying’ and ‘exponential’ climate change.

The future British king says he understands why people feel ‘so despondent, so fearful and so powerless’ in the face of a such a rapidly approaching ‘tipping point’.