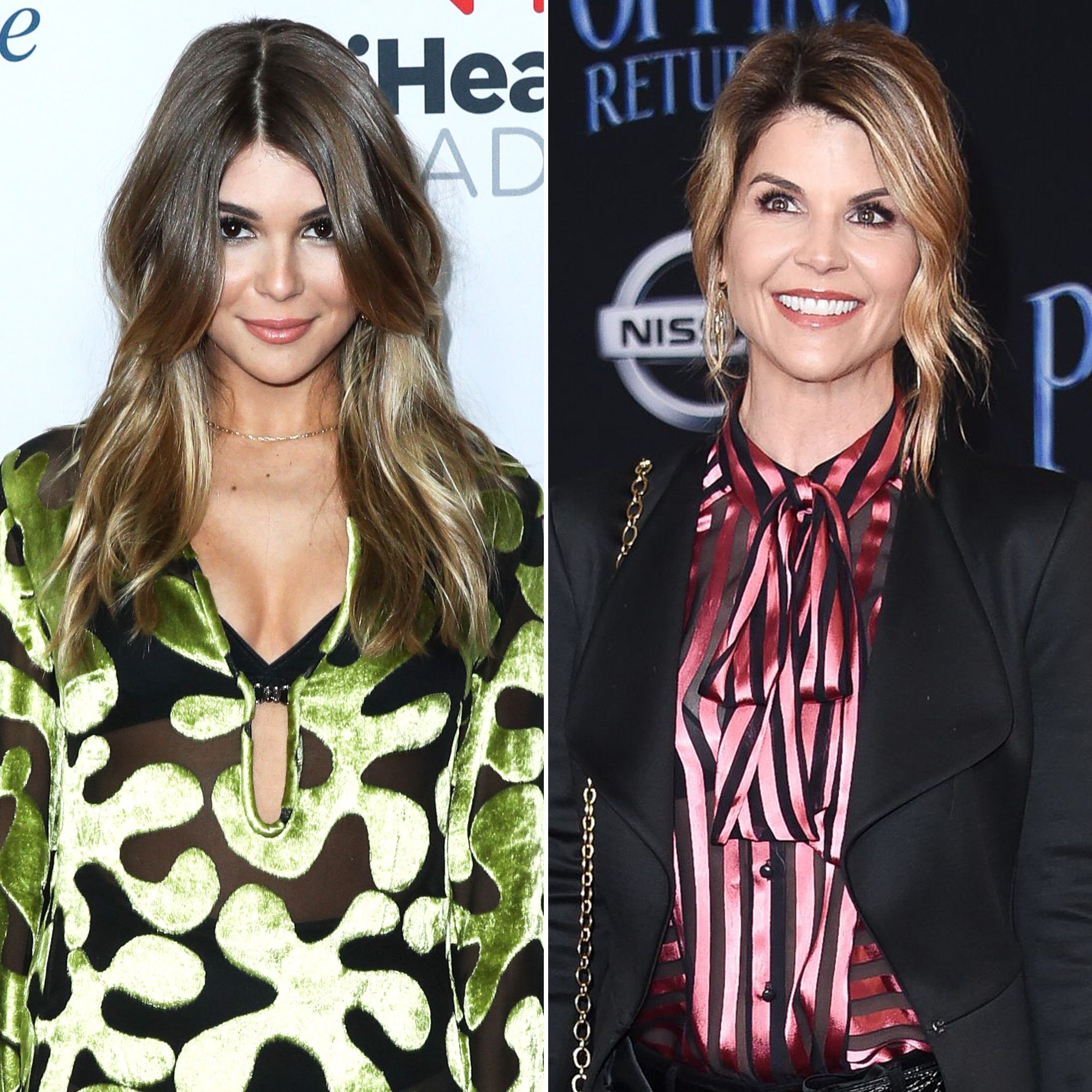 Supportive family! After Lori Loughlin returned to acting on When Hope Calls, her two daughters were two of her biggest cheerleaders.

“Yaaaaa baby SHE BACK ON THE BIG SCREEN for all u hearties out there,” Loughlin’s daughter Olivia Jade Giannulli wrote via Instagram Story on Saturday, December 18, while reposting a message from her sister’s account.

Bella Giannulli, for her part, wrote on Saturday: “If you have GAC, be sure to check out this wonderful woman’s performance tonight. It also airs on IMDB & Amazon.”

The Dancing With the Stars season 30 alum, 22, also shared a second message of support, gushing over the 57-year-old Full House alum’s talents.

What Is GAC Family and Which Hallmark Stars Are Making the Move?

“Check out the 2-hour holiday special of WHEN HOPE CALLS tonight on the new GAC Family Network! 8pm ET/ 5pm PT,” the influencer wrote via a second Instagram Story snap. “Mom doesn’t have Instagram so I’ve made the decision that I will be taking it upon myself to promote for her because I love her and she is a wonderful woman and actress. That’s all! Tune in weeeeee. #hearties #gac family #whenhopecalls.”

She jokingly added in her post, “See I know the fandom name and the hashtags and everything. Where’s my check?” 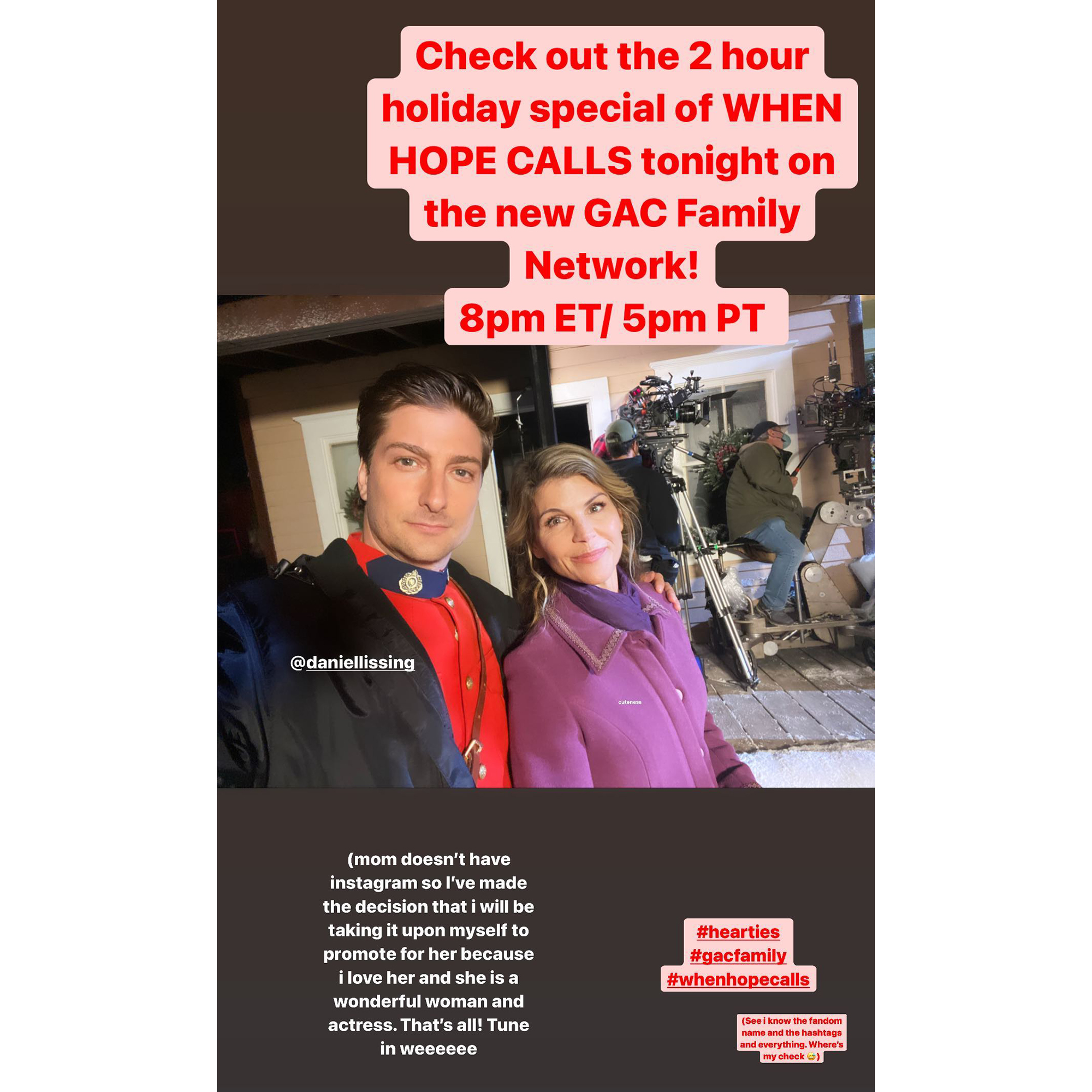 Loughlin, for her part, acted for the first time since her prison sentence after her involvement in the nationwide college admissions scandal, reprising her When Calls the Heart role on the When Hope Calls spinoff.

During the Saturday premiere of the GAC Family series, the 90210 alum reprised her role as Abigail Stanton during the two-part episode, titled “A Country Christmas.”

Loughlin was originally cut out of the Hallmark Channel series, which she starred on from 2014 to 2019, after she was indicted that March. Amid the scandal, the historical drama went on hiatus to edit her scenes out. When the Hallmark fan-favorite show returned, her character was written off in a May 2019 episode to take care of her ailing mother back East. Two years later, the actress’ character returned to Hope Valley with her adopted son, Cody (Carter Ryan Evancic). She reunited with Lillian (Morgan Kohan), who’s now the sole owner of the New Hope Orphanage.

Elsewhere in the episode, Loughlin’s Abigail got a special visit from Jack Thornton (Daniel Lissing). While Jack had previously died during season 5, he appeared in an emotional dream sequence during Saturday’s episode to deliver a message to his wife, Elizabeth (Erin Krakow).

“Will you let her know that I am happy that she is moving on with her life?” Jack asked Abigail during the episode. “And let her know that she is doing a fine job with little Jack, and I cannot be more proud of both of them. … And one more thing: You tell her that true love never dies. I know that now more than ever.”

Loughlin’s character tearfully replied, “Oh, Jack. There is so much that she wants to tell you.”

College Admissions Scandal: Where Are They Now?

The New York native and her husband, Mossimo Giannulli, were previously accused of paying bribes to secure their daughters’ admission to the University of Southern California. The duo later pleaded guilty to fraud charges in May 2020 before each serving a prison sentence. Loughlin was released in December 2020, and Us Weekly confirmed in September that she would return to the WCTH universe for her first acting gig since the scandal.

“Lori can’t wait to get back to work, she has been waiting a long time to get back on set,” an insider exclusively told Us at the time. “Lori is looking forward to the future and is ready to get back to filming When Hope Calls.”

Olivia Jade, for her part, recently finished up competing on DWTS, often gushing about her mom’s own invaluable support.

“Literally right after we got off the stage, I called her! She’s the biggest support ever. She’s really proud of me and I love her so much,” Olivia Jade told Us Weekly and other reporters in October. “She’s, like, my hero. So it’s really nice to know she’s watching and she’s really proud. … Mama bear! She’s excited.”