The 1950s and '60s were a time when cows, rather than fixie bikes, roamed the "dustbowl" of Cheddar Road, one of the main streets in Reservoir in north-east Melbourne. Gangsters such as Dylan "Gunny" Thomas controlled the pubs, when craft beers certainly weren't on tap. 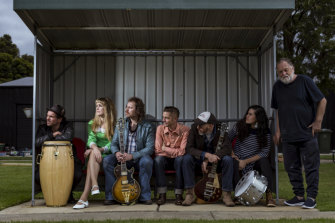 Reservoir will return to that era on Sunday, when the Cheddar Road All-Stars bring Dickins’ childhood memories to life and premiere their co-created album Nowhere Else to Feel Rotten at the fourth annual Reservoir Stomp festival.

Local couple Danny Walsh and Emma Peel (who are also in the band) created the Reservoir Stomp in 2016 after realising how often they were bumping into musicians at the local shops.

As gentrification continues to push the arts community beyond its traditional stronghold of suburbs such as North Fitzroy, Walsh says the task of filling the program with only Reservoir residents is becoming easier and the festival's aspirations are growing.

Dickins, born in Reservoir in 1949, has often written on the suburb he still lives in. 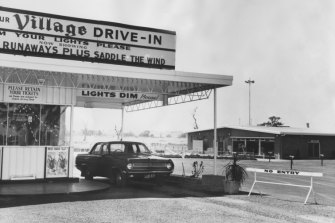 The Village Drive-In Theatre in Reservoir in 1969.Credit:The Age

While Walsh says their collaboration made "perfect sense", it only began thanks to a chance meeting outside a Reservoir pie shop more than a year ago, when they agreed to try to convert Dickins' prose into rock music.

"Even just the titles grabbed me and I thought this was something I really wanted to do something with."

Walsh, a guitarist in his rock'n'roll outfit Danny Walsh Banned, invited a group of fellow local musicians to his home as Dickins read the verses and shared stories. 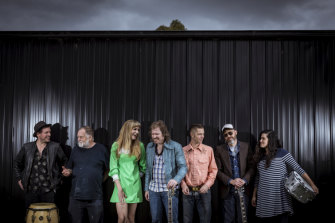 The band contains only Reservoir locals, including Stomp organisers Emma Peel and Danny Walsh (third and fourth from left).Credit:Chris Hopkins

"Barry told this story of Gunny Thomas very dramatically. Barry was at a pub and a guy was giving Gunny a bit of grief," Walsh said.

"Gunny pulls out a gun, sits it on the bar and says ‘you’re hot’. Then he pours his beer onto the gun, it sizzles and he goes, ‘now you’re not’."

They’re sort of tiny camera shots of ordinary life among the working class.

That story inspired the spoken word track Gunny Thomas on the album, where Dickins narrates over a "sinister" guitar backing.

The song Bus to Dundas captures Dickins' memories of farmers with their pigs boarding the bus to Thornbury while children sat on the engine.

Another, Vietnam War in Reservoir, is "as if Reservoir is the killing fields of Saigon, it's all about the horror of the call-up".

The average house price in Reservoir, 12 kilometres from the Melbourne CBD, is about $715,000, up 29 per cent over the past five years according to Domain data.

While Melbourne's inner-north increasingly looks over its shoulder at "Rezza", Walsh says he still feels the sense of community that Dickins writes about in the suburb that is also home to the “yiayia next door”.

"I think you slowly see more artists floating around the area … but I feel it’s still got a long way to go before it’s gentrified, it’s still got its genuine parts."

The Cheddar Road All-Stars will be joined on Sunday by musicians such as hip-hop artist Remi and funk trio Cookin' on 3 Burners, plus several children's acts.

Walsh is looking forward to the band performing its own 12-song chapter in Reservoir history.

"That’s why I’m really excited, that this is documenting life in the 1950s in this suburb and how it's moved into the current times."