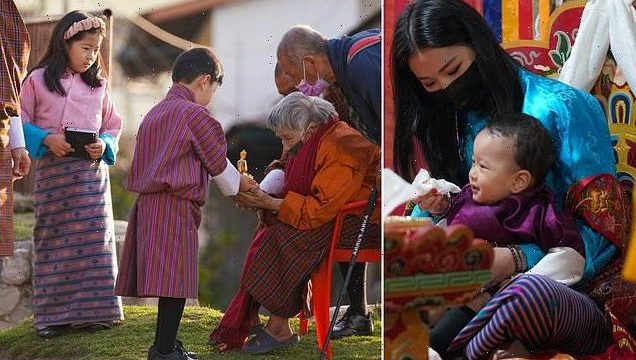 A family day out! King and Queen of Bhutan are joined by their adorable sons Prince Jigme, 5, and one-year-old Prince Ugyen on an official royal visit to Mongar Dzong

The King and Queen of Bhutan were joined by their adorable sons as they paid an official visit to Mongar Dzong  today.

The couple were accompanied by their son, Prince Jigme Namgyel Wangchuck, five, and Prince Ugyen Wangchuck, one, for the royal visit.

Prince Jigme, who wore a face covering during the visit, could be seen colouring in and chatting with his cousin Her Serene Highness Decho Pema Wangchuck. 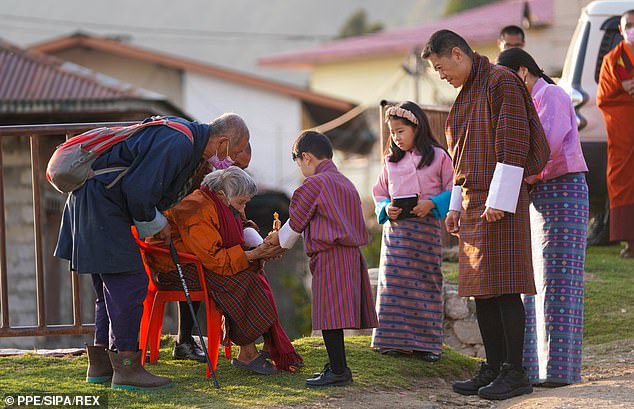 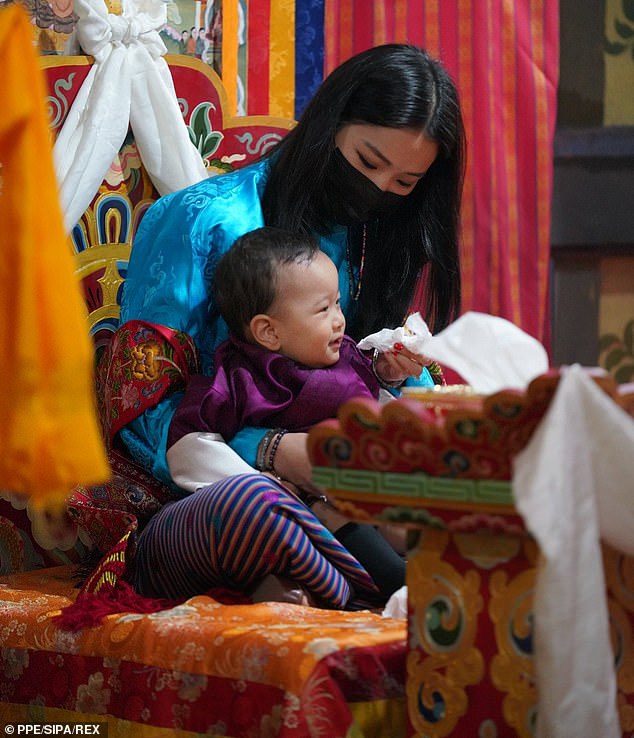 It was the first time Prince Ugyen, who turned one last month, visited the district, and he was pictured cuddled up to his mother Queen Jetsun Pema

The king, wearing traditional dress, chatted with citizens and with His Holiness the Je Khenpo at Namdroling Dratshang in Autsho, Lhuentse.

Meanwhile, Her Majesty Queen Jetsun Pema and her elder sister Ashi Yeatso Lhamo spoke with children who gathered near parked cars in the district.

The king also attended a meeting with the Pemagatshel Dzongkhag COVID-19 Task Force. 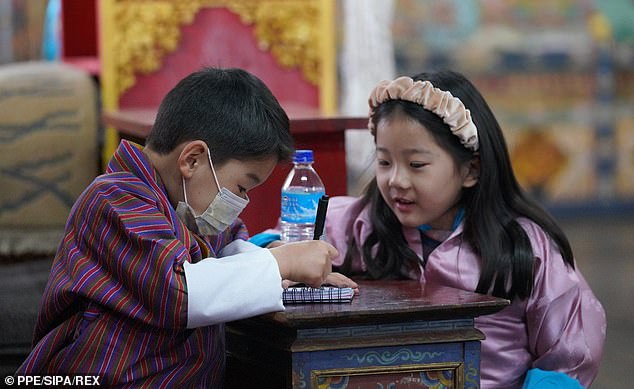 Prince Jigme was seen chatting and drawing, while wearing a face covering amid the pandemic, with his cousin Her Serene Highness Decho Pema Wangchuck 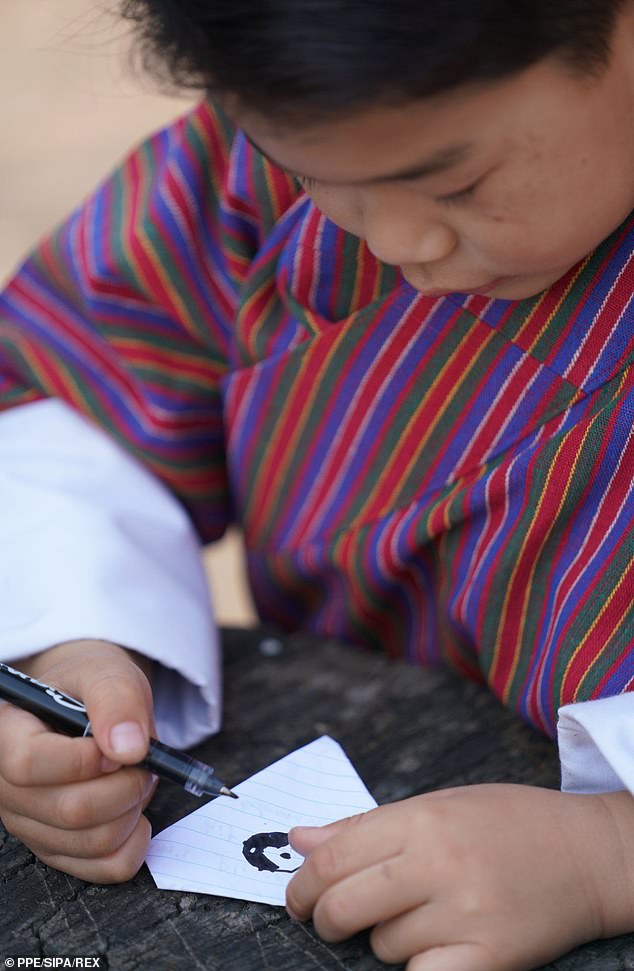 The Dramitse Lhakhang is a sixteenth-century monastery in the verdant slopes of the eastern Himalayas and today houses a community of 80 monks.

King Jigme, the hugely popular fifth Druk Gyalpo, studied in the UK and the US and ascended the throne in 2006, aged just 26 after his own father abdicated. 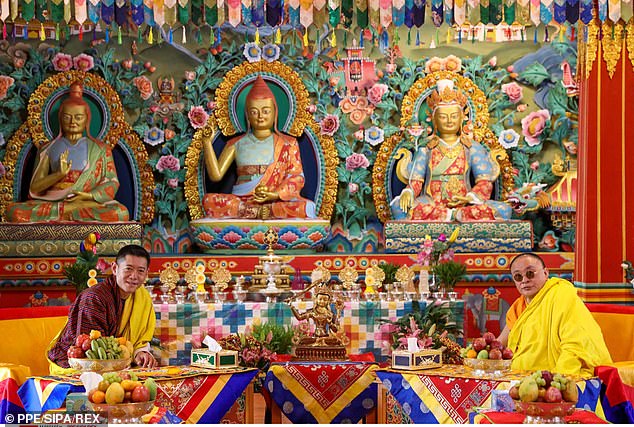 His Majesty King Jigme Khesar Namgyel Wangchuck met with His Holiness the Je Khenpo at Namdroling Dratshang in Autsho, Lhuentse 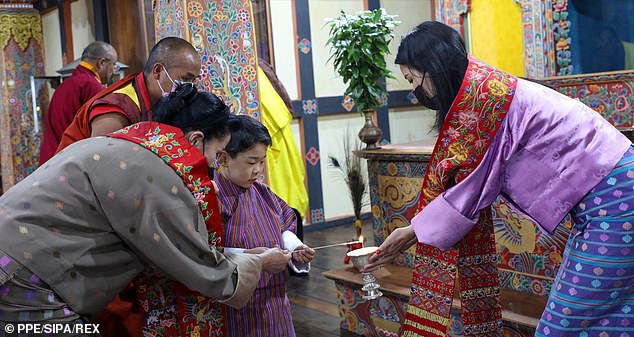 Her Majesty The Gyaltsuen and Her Majesty Gyalyum Tshering Yangdoen helped His Royal Highness Prince Jigme light a butterlamp at the Dramitse Lhakhang, a sixteenth-century monastery in the verdant slopes of the eastern Himalayas

Unlike his son, who plans to have a monogamous marriage, the former King, who introduced democracy to Bhutan during his reign, has four wives, all sisters who he married on the same day.

But despite his own upbringing, the current monarch has made clear that he only plans to have one wife, whom he married on October 13, 2011, when she was still an international relations student at Regent’s College in London.

The match made headlines at the time because the young King was more openly affectionate with his wife than citizens were used to – leaving the couple to be called ‘the William and Kate of the Himalayas’. 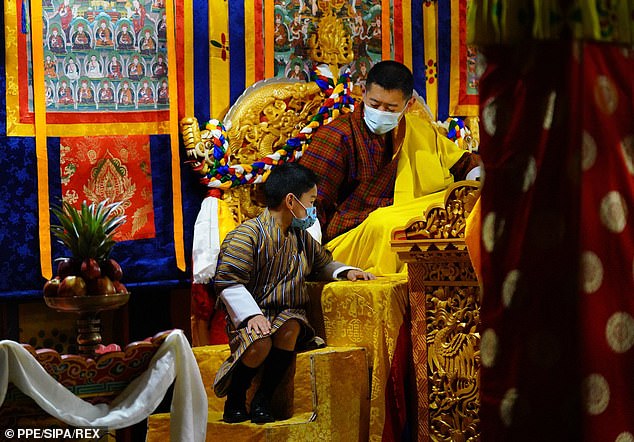 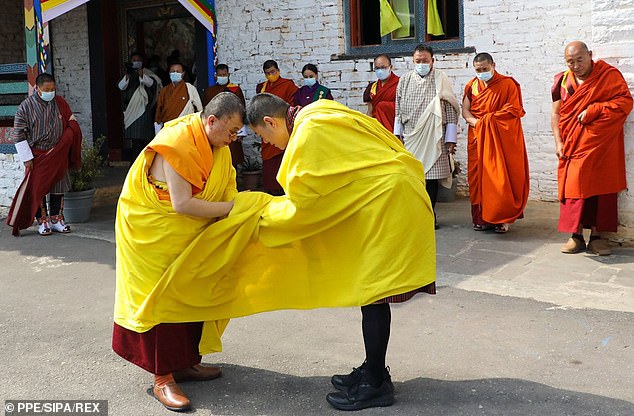 Their Majesties held audience with His Holiness the Je Khenpo on April 6, in which they wore traditional dress 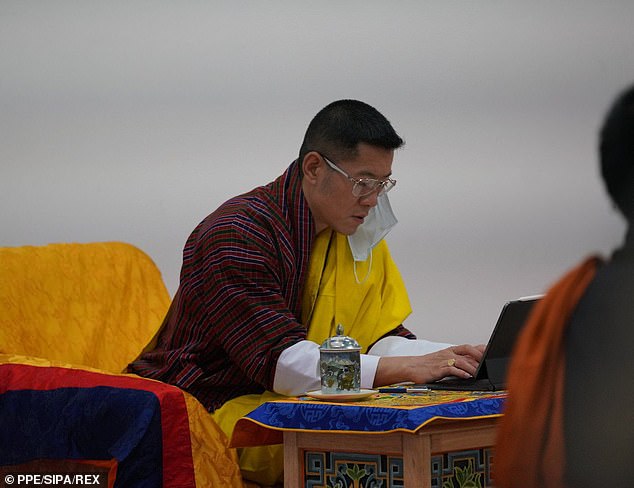 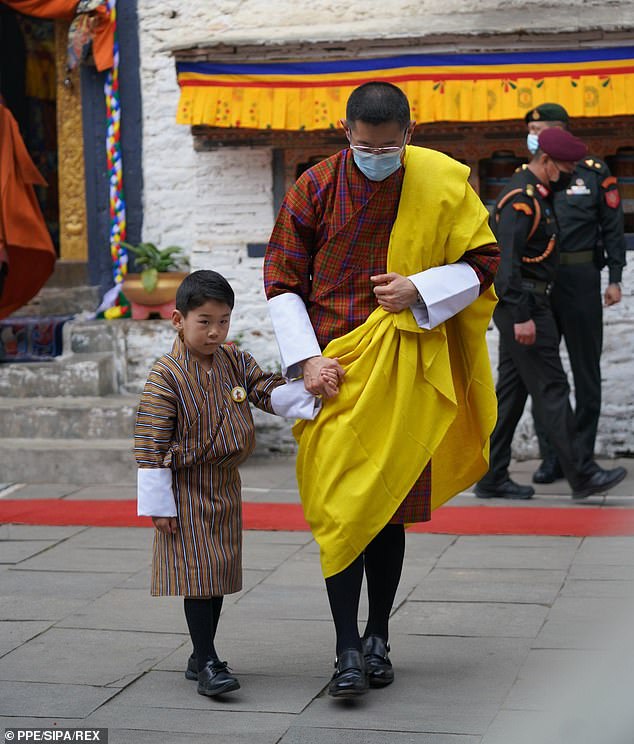 The king, who is wearing a blue face covering amid the ongoing pandemic, is pictured holding the hand of his five-year-old son

However, his very public displays of affection – which included kissing his wife on the cheek and holding her hand – was well-received by young people, with many even choosing to follow the royals’ example.

The couple have an unusually close family, with the King’s sister and brother married to the Queen’s brother and sister. 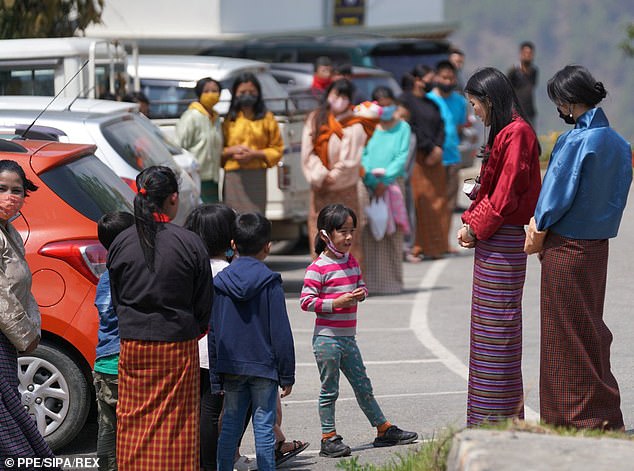 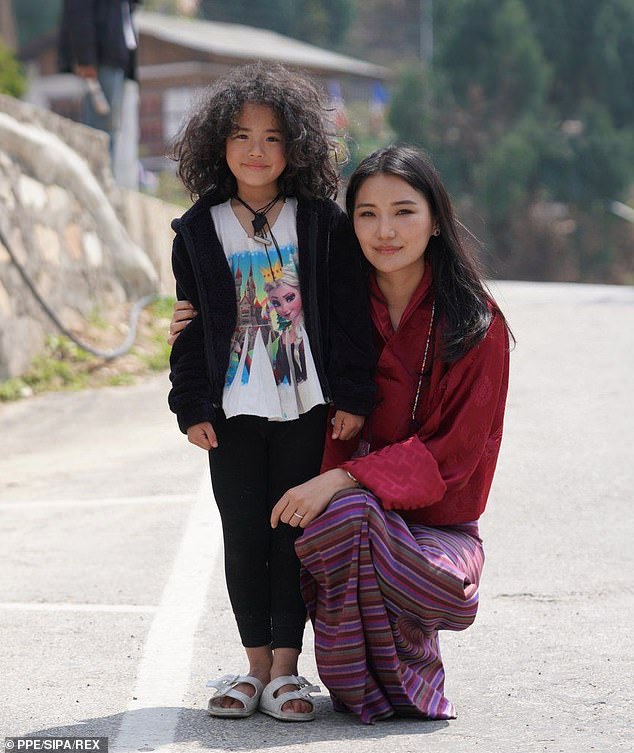 Ashi Yeatso, donned a purple and red ensemble as she joined the family to meet with residents of Mongar