Chastain sounds off on the little peck that set Twitter on fire.

Jessica Chastain has finally chimed in on the viral moment she and her “Scenes from a Marriage” costar Oscar Issac sparked at the Venice Film Festival.

Last week, the 44-year-old actress and her costar stood on the red carpet to promote their new HBO miniseries when Isaac took a second to kiss the crook of her elbow. The video of the moment was slowed down and became a viral meme, before photos of them together went wild online as well.

Appearing on “TODAY” Wednesday morning, Chastain was asked about the tender moment the two actors shared … and the very vocal reaction from social media.

“We’re acting, but also Oscar and I have been friends — we went to college together — so we’ve been friends more than half of our lives,” she explained.

“Let me just say, though, this is a slow-motion video, and everybody is super sexy in slow motion,” she added. 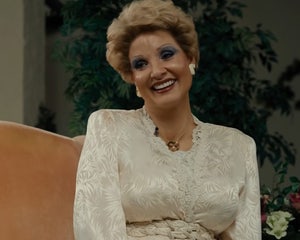 She said that, when played back in regular speed, the interaction was actually a result of a miscommunication where Oscar went in for a quick elbow peck, while Jessica tried for a hug at the same time.

“So all of a sudden, his face ends up in my armpit. He made a joke out of it. Look, he’s smiling there!” she said pointing at the video replay.

“All the photographers started laughing, and were like, ‘What just happened?'” Chastain laughed.

She also joked that with the pandemic lasting so long, fans at home were clearly touch-deprived and starved for the everyday, pre-Covid human interactions. “We have all been locked in our houses for so long,” said Chastain, “When this video went viral, I was like, people just need to see people touch and hold each other.”

Of her actual relationship with Isacc, Chastain said the two “know how to make each other laugh without saying anything.” She added, “We can almost read each other’s minds. It also means we could hurt each other really strongly. In the scenes, we would know how to get to the other one.”

Before her “TODAY” appearance, Chastain made fun of the hoopla by tweeting out a GIF of Gomez Addams kissing his wife Morticia’s arm from the “The Addams Family.” She simply captioned it with the premiere date of “Scenes from a Marriage”.