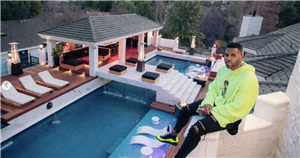 When you’ve made as many hit songs as Jason Derulo, it’s no surprise you live in a very lavish pad.

And the stunning abode is now home to Jason’s first baby too, who he welcomed with his 26 year old girlfriend Jena Frumes.

Jason, 31, took to his Instagram feed to announce the happy news as he shared a sweet compilation clip with his 7.7million followers.

The footage sees a shirtless Jason holding pregnant Jena, 26, before cutting to the blonde beauty explaining: "Today is the day we are having the baby".

Fans are then shown a scene of hospital staff placing the newborn on Jason's chest as he lies down before it cuts to the new dad looking over their baby son as he sleeps while his own song Women plays in the background.

"He’s so lucky to have such a strong caring hero of a motherboy, @jenafrumes".

And Jason and Jena live in a stunning home, which has room a’plenty to raise their little one in.

The house is extremely impressive, and we’ve caught glimpses not only on Jason’s Instagram account but his TikTok too.

Inside the £2.1million California mansion you’ll discover five bedrooms and five bathrooms in the main house.

There’s also a wow-worthy two-bedroom guest house, which allows the pop star to entertain his pals in sheer luxury.

Often we get glimpses of Jason’s 75-foot outdoor pool and his very impressive outdoor area, which features a pergola and built-in bar.

There’s also a basketball court if the pool wasn’t enough, which looks like another top spot for socialising.

The interiors inside the 31 year old’s home are very lavish, with chandeliers hanging in most of the rooms.

Clearly the Talk Dirty singer is also a fan of artwork, as his home is positively booming with it, in all different shapes and sizes.

In one room there’s a pool table, and beside it sits cream leather chairs to recline in.

Another very impressive spot in the bright and airy home is the staircase, which boasts a rolling red carpet for some extra glitz and glam.

There’s also a suit of armour in the hallway, showing Jason’s eccentric choice of decor inside the abode.

And for when it’s time to dim the lights and put the feet up, Jason has just the spot – an epic cinema room.

The space is fully equipped with reclining leather seats and cushions which read ‘popcorn.’

The floor is velvet and yet another chandelier hangs from the ceiling, but all in all, it looks like a top spot to watch back his many music videos.

And of course there’s a recording studio! The star has his very own spot where he can make music, and it looks fully kitted out.