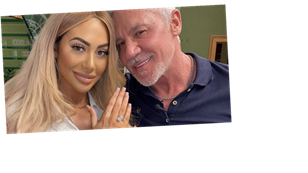 Chloe Ferry is believed to be “seeing” Wayne Lineker after he described how the pair are “always flirting”.

And the blonde Geordie Shore beauty has had quite the roller coaster ride where relationships are concerned.

The TV personality was in a relationship with Love Island’s Sam Gowland, 25, for two years until they split in 2019. After moving on, she sparked rumours she was "engaged" to Wayne, 58, after posing with a ring on her finger alongside club owner while on Celebs Go Dating: The Mansion.

But who has the TV personality dated? Let’s take a look… While Chloe admitted that she didn’t immediately have any sexual chemistry with Kieran, he quickly caught the attention of Geordie Shore star Chloe who picked him to stay on the show over his twin brother.

And after filming ended, it was reported that Kieran and Chloe were an official couple.

A source told The Sun: "Chloe loved Kieran's energy from the moment she met him but it took a while for her to realise how much she liked him.

"At the start of the process, she was relishing the attention she was getting from all the male suitors. It wasn't until the final stages that she realised Kieran is exactly the type of guy she needs.

"Kieran is totally different to her exes, who have tended to be bad boys. He's a total gentleman who treats her the way she deserves and gets on with everyone he meets.

However, catching up with Sophie Hermann in February, things didn’t sound good for the couple.

Although she didn’t say for certain, Sophie definitely hinted that the couple have since parted ways.

"Is she?" Sophie replied before stumbling over her answer saying that she couldn’t speak for anyone else’s relationship.

“I don’t know about that, I can’t speak for Chloe!” she said before quickly changing the subject.

In 2019 Chloe sparked relationship rumours with Love Island’s Jack Fincham after the pair were spotted flirting on holiday in Ibiza.

A photo taken of the pair revealed Jack cupping Chloe’s derriere whilst he lay on a sun lounger.

It was Sam that caught everyone’s attention when it came to Chloe Ferry’s love life.

Sam, 25, and Chloe first went public with their relationship in October 2017, but they split in May 2019 after Chloe accused Sam of cheating with Amber Davies, which they both denied.

Chloe took to Instagram to accuse Sam of cheating, and the reality star shared messages that the couple had sent to one another.

Chloe and Sam are said to have reunited during a trip to Dubai, and Chloe’s friends weren’t happy about it. An insider told The Sun Online at the time: “They've gone to Dubai. Her friends think she's crazy and just doing it to stop Sam from taking legal action against her.

"Chloe knows it's a toxic relationship but said she's willing to give it another try.”

The pair regularly posted on social media during their relationship, including an image of Sam Gowland revealing a tribute tattoo to Chloe Ferry that he got on his chest with her name. 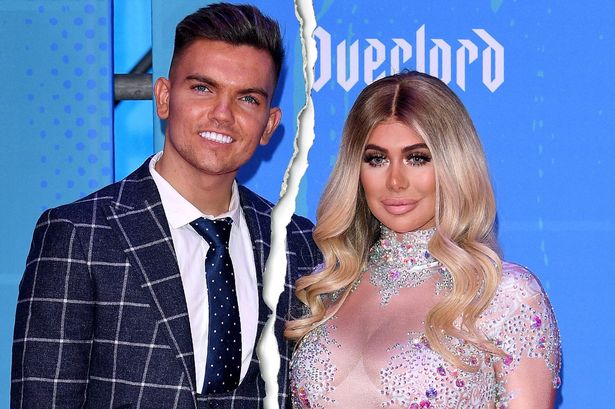 Chloe also got a tattoo to pay homage to Sam, with a wrist tattoo of his name which she later changed to ‘salmon’ and wrote on Instagram: “Plenty more fish in the sea! who likes me new tat?”

Sam also covered up his Chloe tattoo with a bear design.

The pair spoke about children and marriage and appeared alongside each other on Geordie Shore too.

The star, who took part in the nineteenth series of Celebrity Big Brother in 2017, is said to have dated TOWIE’s Jon Clark in 2016. The pair supposedly went on dates and shared a flirty photo with Jon’s hand on Chloe’s knee.

But Chloe soon dumped the TOWIE star after “catching him arranging a meeting with another girl,” as reported by MailOnline. A source close to the Geordie Shore star revealed to The Sun at the time: “Chloe has binned Jon already.

“The day after their date he accidentally sent her a text which wasn't meant for her where he was arranging a meeting with another girl.”

In 2016, Chloe took to social media to share a picture of her budding romance with Sam Scott – A DJ – captioning the image “My Sam,” with a picture on Snapchat of the pair smooching. Fans were confused at the time and Sam’s ex-girlfriend wasn’t best pleased either.

She wrote on Twitter: “When you break up with your boyfriend of 6 years on Monday and then he decides to publicly humiliate you with a Z-list for some 'fame’.”

Chloe has also dated Geordie Shore star Marnie Simpson. The Mirror reported that the pair had slept together in the Geordie Shore house in 2017, and Marnie said: "It's not real, it sounds silly, but it's not real," she wrote.

"We don't take it seriously. We just giggle and laugh. It's like I've dived into this make believe world and it's like I'm having a laugh and being stupid.

"Because it's Chloe, it was like I wasn't really doing it. She's the one friend that everyone can let loose with and be yourself."

Chloe has also dated Geordie Shore star Scotty T during Geordie Shore but the pair never embarked on a serious relationship, and Scotty ended up cheating on Chloe with Chantelle Connelly.

The reality star also dated Marty McKenna but, as soon as Chloe began dating Sam she was adamant that she wouldn’t get involved with Marty again. “I'm civil but I'll never be his friend. I don't think he's a nice person,” she added.