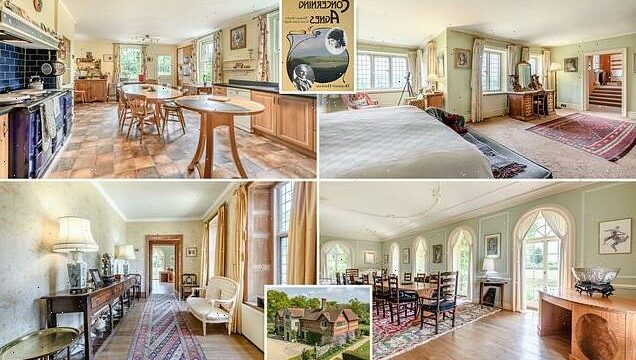 An impressive country house that was once home to an aristocrat who inspired the Thomas Hardy novel Concerning Agnes has gone on the market for £4.95million.

Sedgehill Manor, near Shaftesbury on the Wiltshire/Dorset border, was the home of Lady Agnes Grove, an aristocratic diarist and essayist who met Hardy in 1895 and adopted him as a mentor.

The historic but unlisted nine-bedroom manor has 55 acres of land and spectacular views over the surrounding countryside. 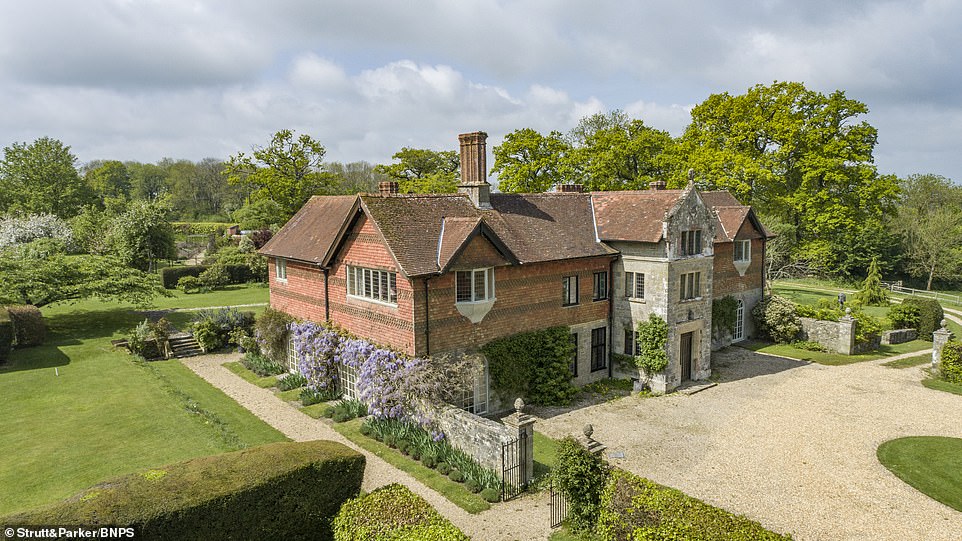 Sedgehill Manor, near Shaftesbury on the Wiltshire/Dorset border, which was the home of Lady Agnes Grove, an aristocratic diarist and essayist who met Hardy in 1895 and adopted him as a mentor is on the market for £4.95 million

Lady Agnes lived at the property in the late 19th and early 20th century. She and the Victorian author met regularly in her morning room at Sedgehill, and also by letter, to discuss her work. Hardy dubbed Lady Agnes a ‘good little pupil’ during their mentoring sessions.

He also advised her on what topics to write about for her periodical publications and helped her to get her works published. She wrote to support women’s suffrage and was anti-vivisection and anti-vaccination. 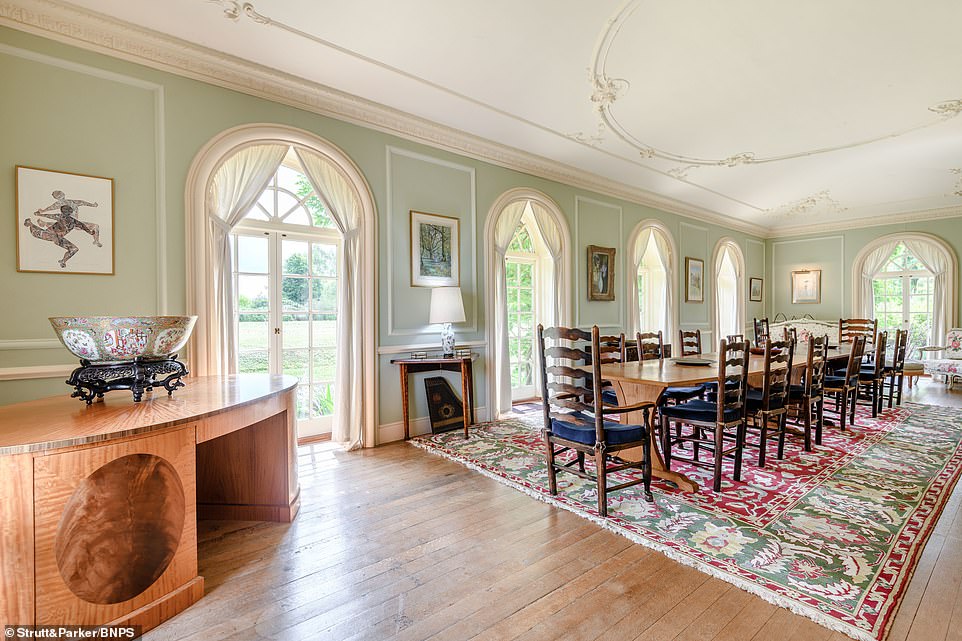 The dining room is a large and bright space with five glass doors letting plenty of light pour into the room; the doors lead out into the sprawling gardens 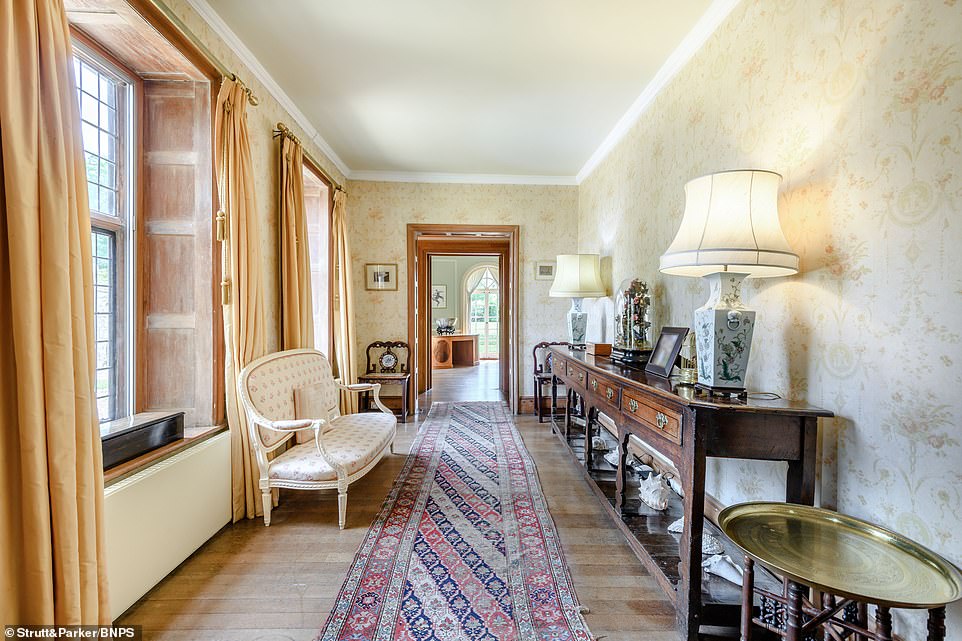 The long hallway still has a traditional feel with vintage furniture and opulent  large windows which are framed with long, cream curtains 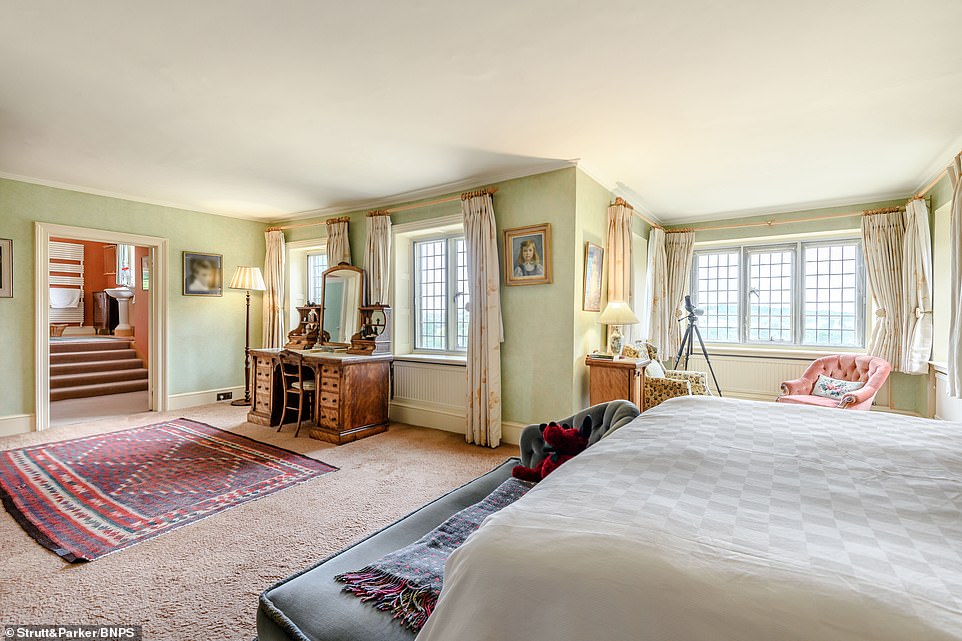 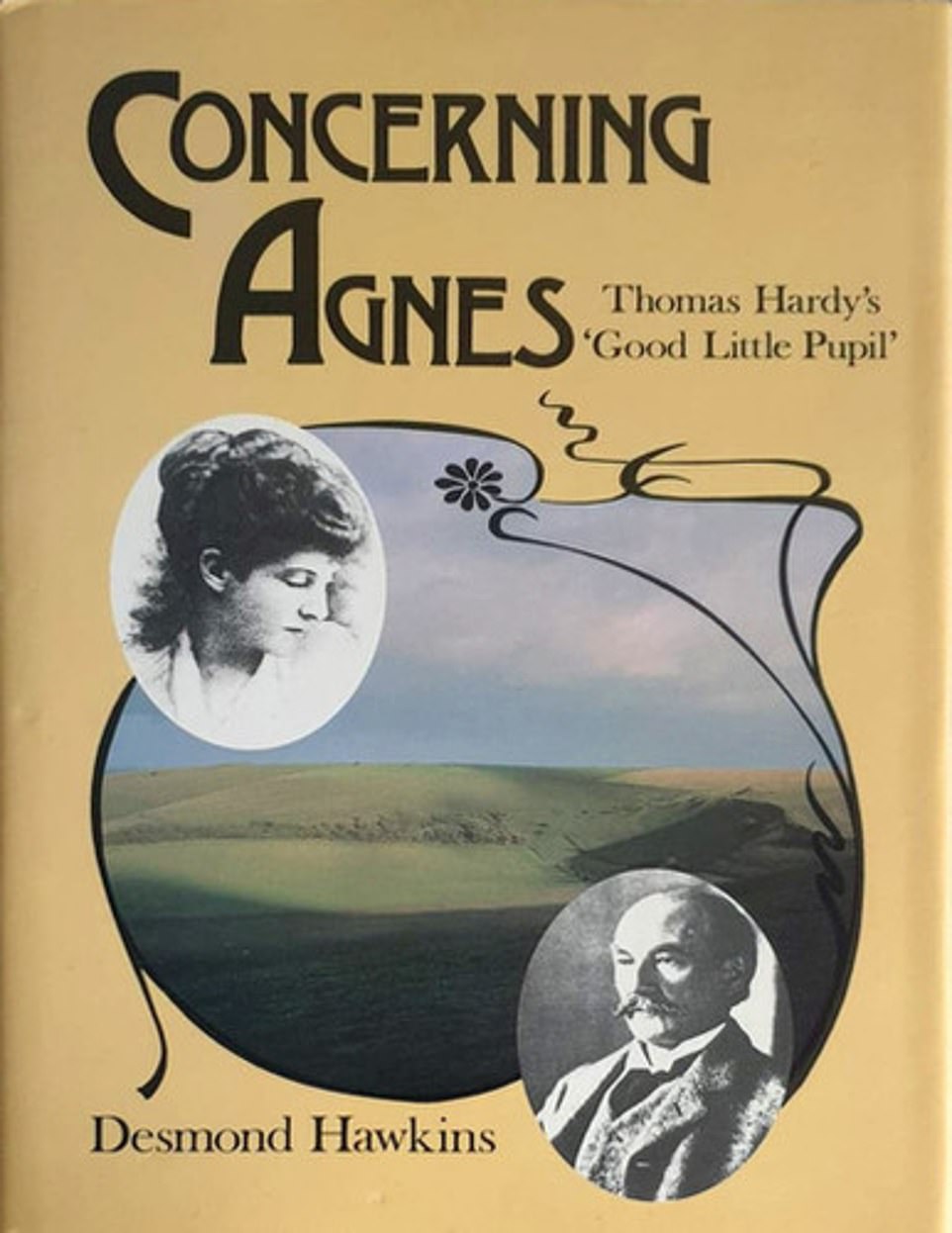 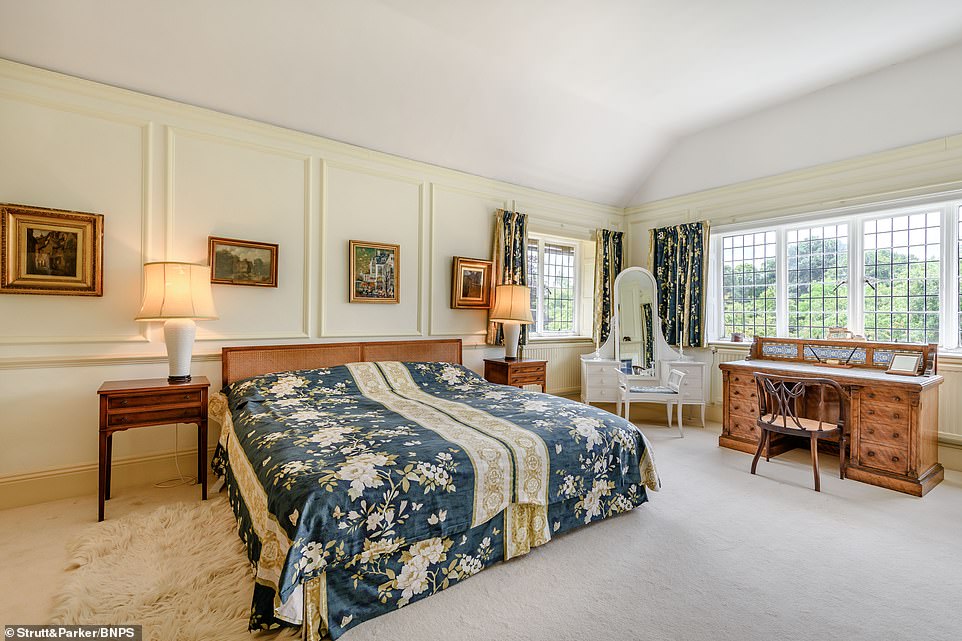 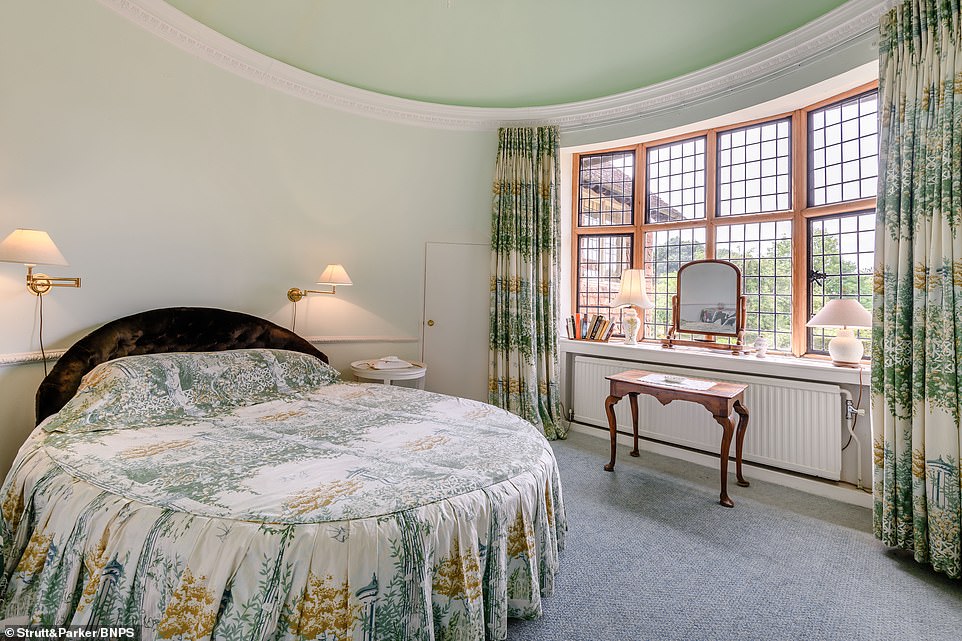 After her death in 1926, Hardy wrote a poem, Concerning Agnes, about the night they met at an event at her father Augustus Henry Lane Fox’s Rushmore estate.

The site was owned by Shaftesbury Abbey in the early 12th century, then passed to the Crown with Henry VIII’s dissolution of the monasteries and was bought by Sir Thomas Arundell, who was connected by birth and marriage to the crown and several of the most important families in England.

But he was accused and charged with conspiring to overthrow the government and convicted and beheaded at Tower Hill in 1552 and his properties confiscated.

It was acquired by William Grove in 1573 and stayed in the Grove family for almost 400 years. 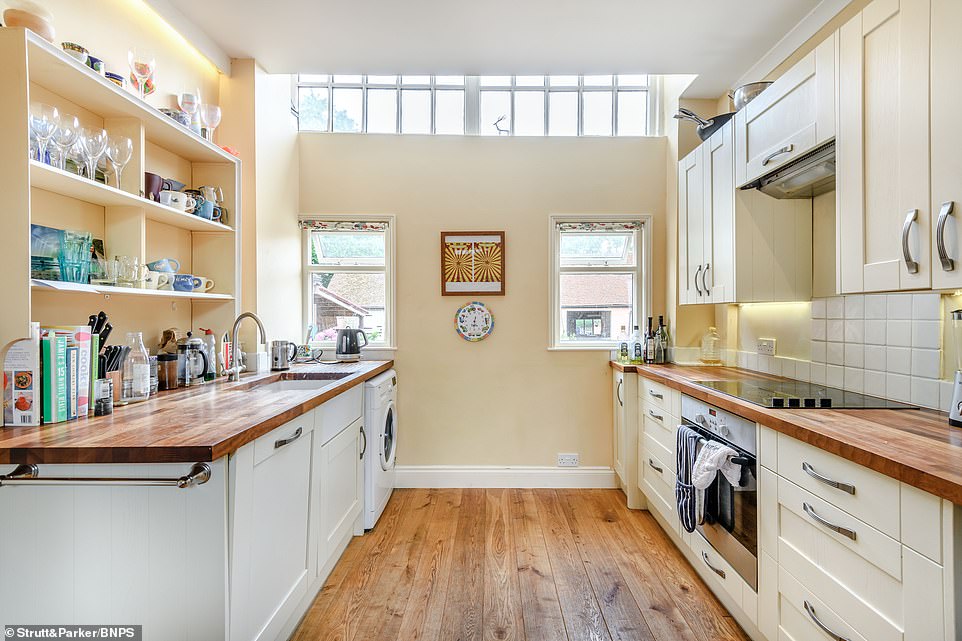 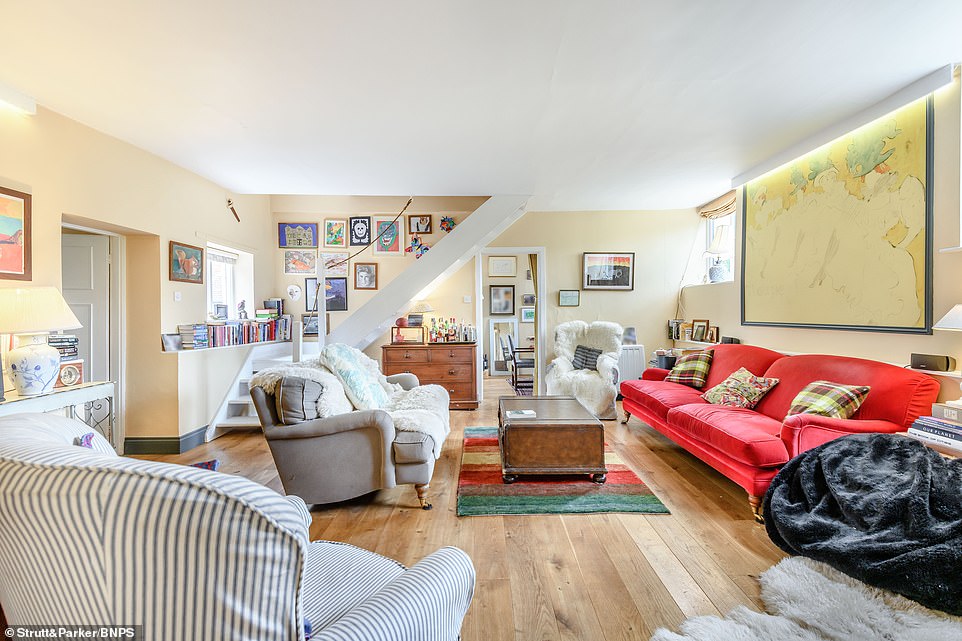 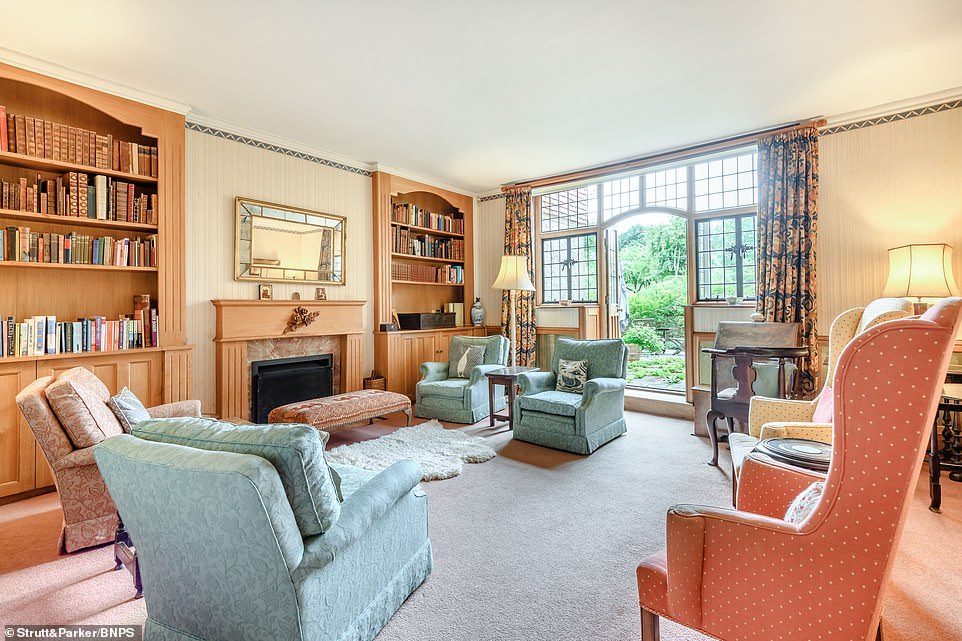 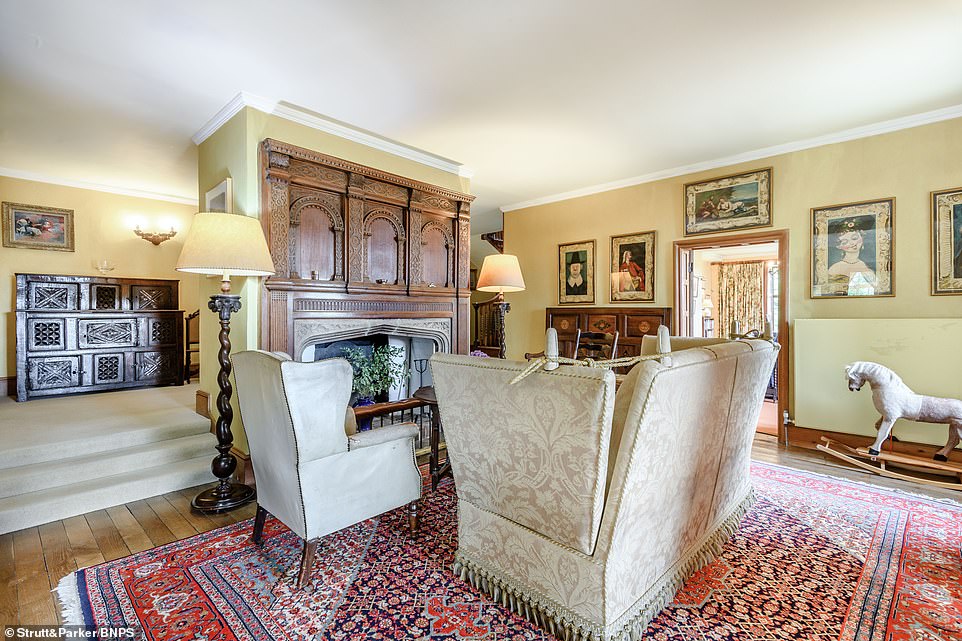 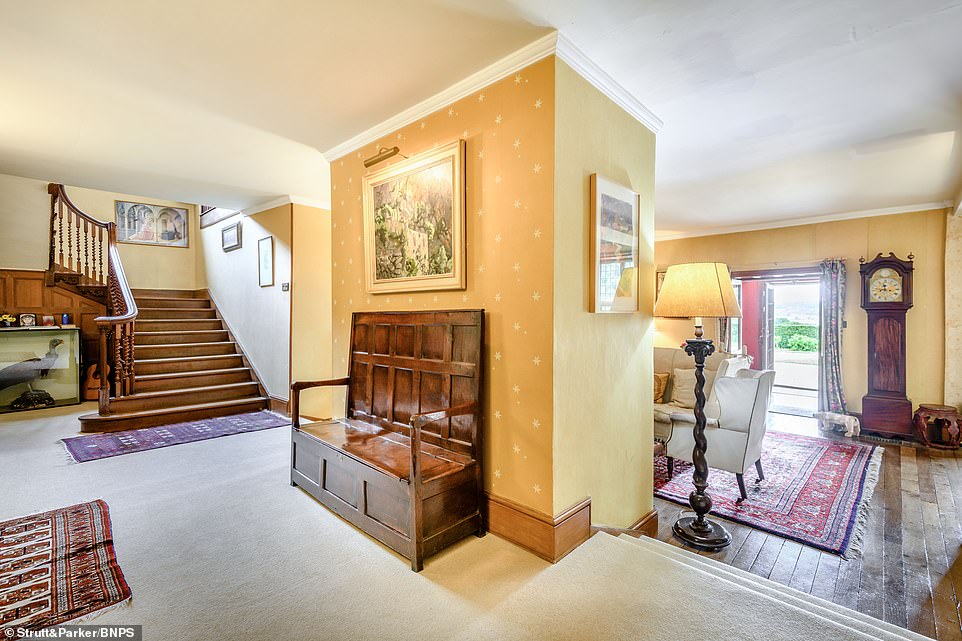 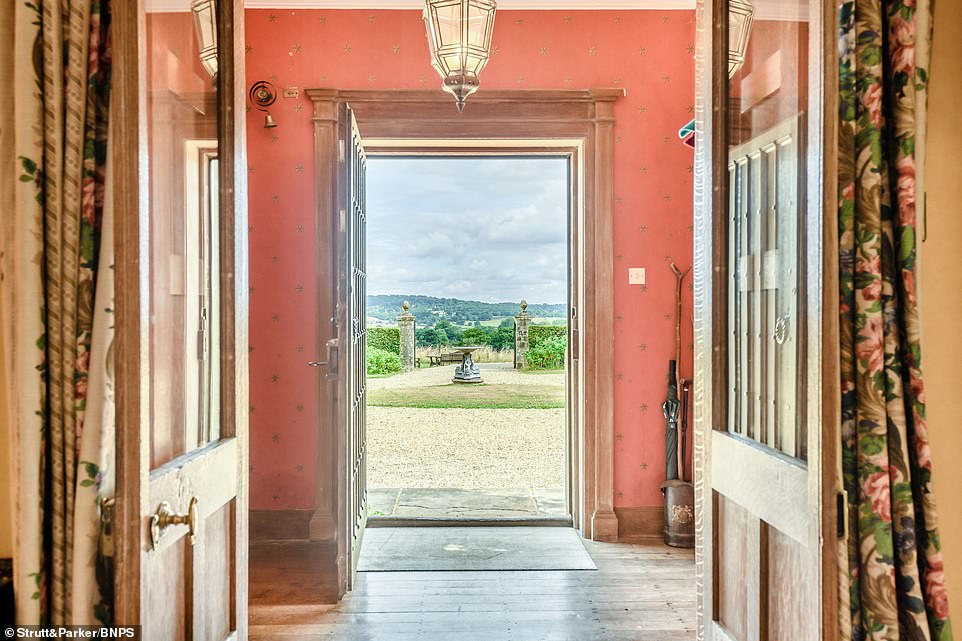 In the 1890s Lady Agnes Grove designed one of the bedrooms as her morning room, where she would write her books and discuss improvements with Thomas Hardy.

The current owner bought the property in 1980 and has maintained and improved it in their 40-year tenure.

The house has over 8,400sq ft with a large entrance hall, dining room and drawing room, as well as a cosy sitting room, kitchen/breakfast room, library, nine bedrooms and five bathrooms.

It also has a party barn, stabling, workshops and garages, bringing the total square footage to more than 12,000. 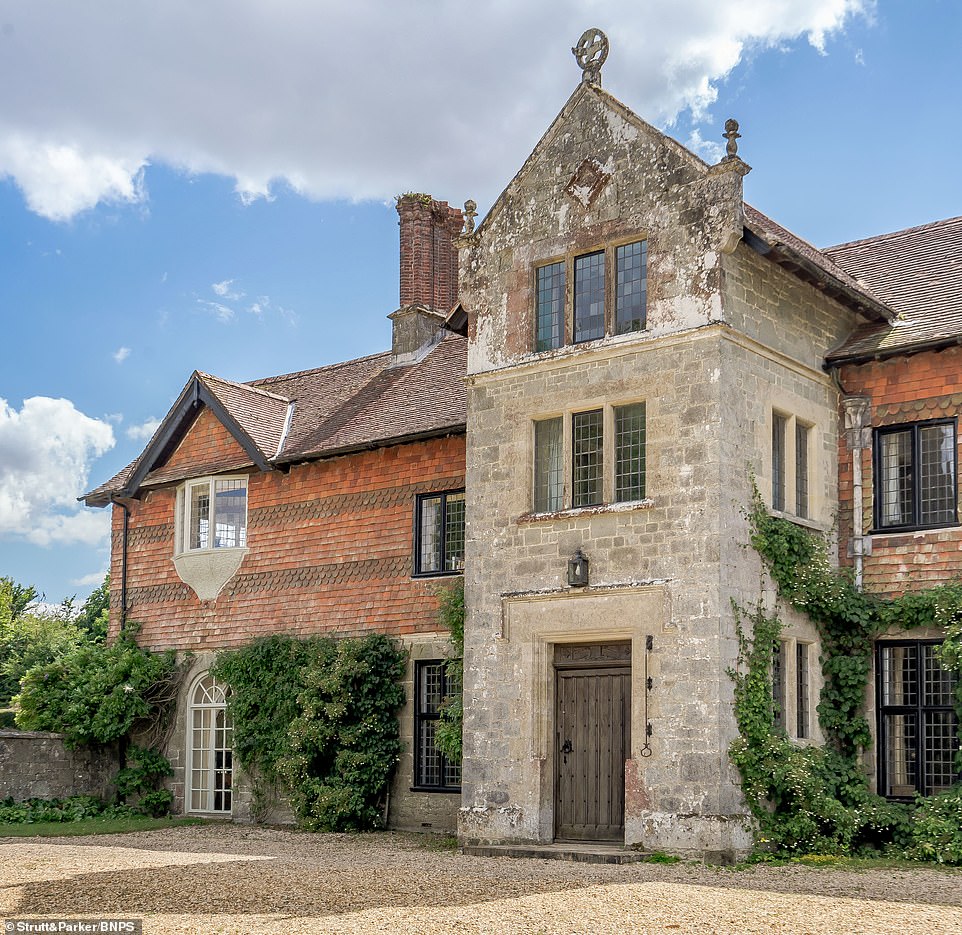 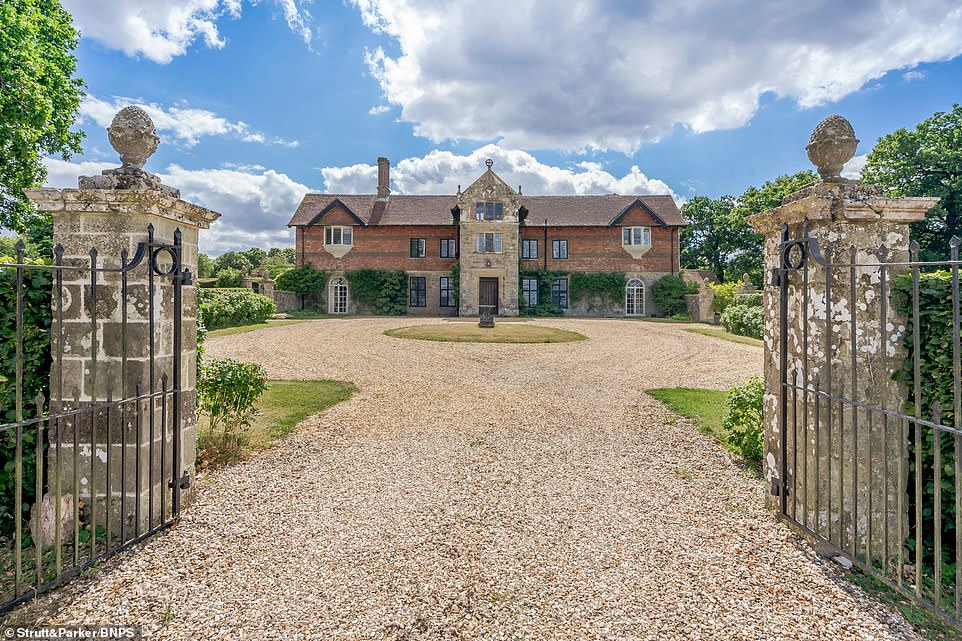 Large steel gates open at the end of the drive way and lead to the beautiful manor home which has a total square footage to more than 12,000 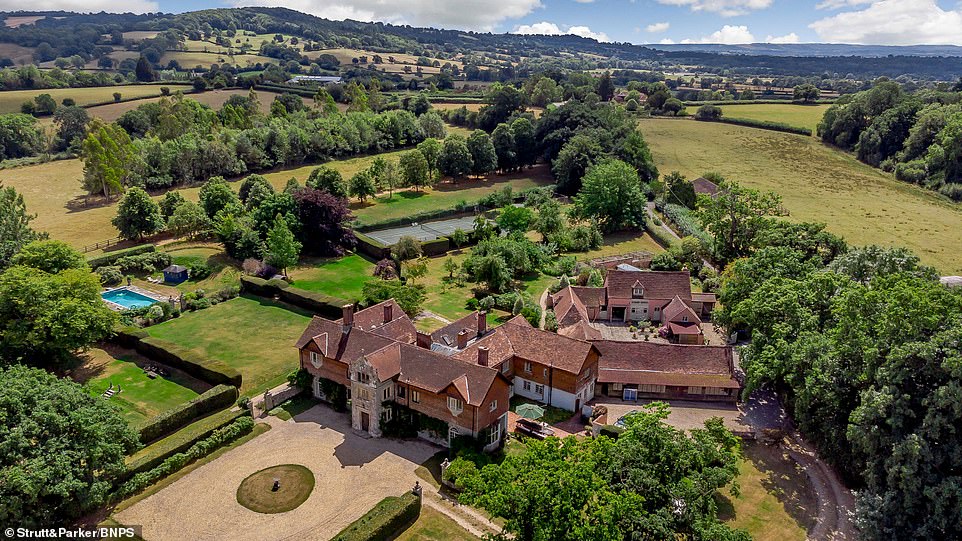 The house has over 8,400sq ft with a large entrance hall, dining room and drawing room, as well as a cosy sitting room, kitchen/breakfast room, library, nine bedrooms and five bathrooms 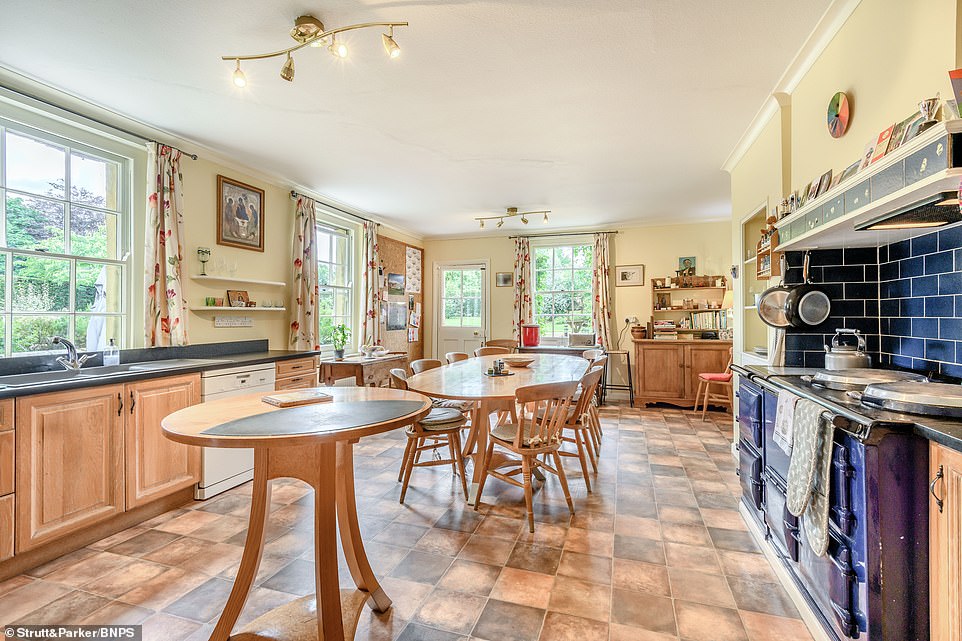 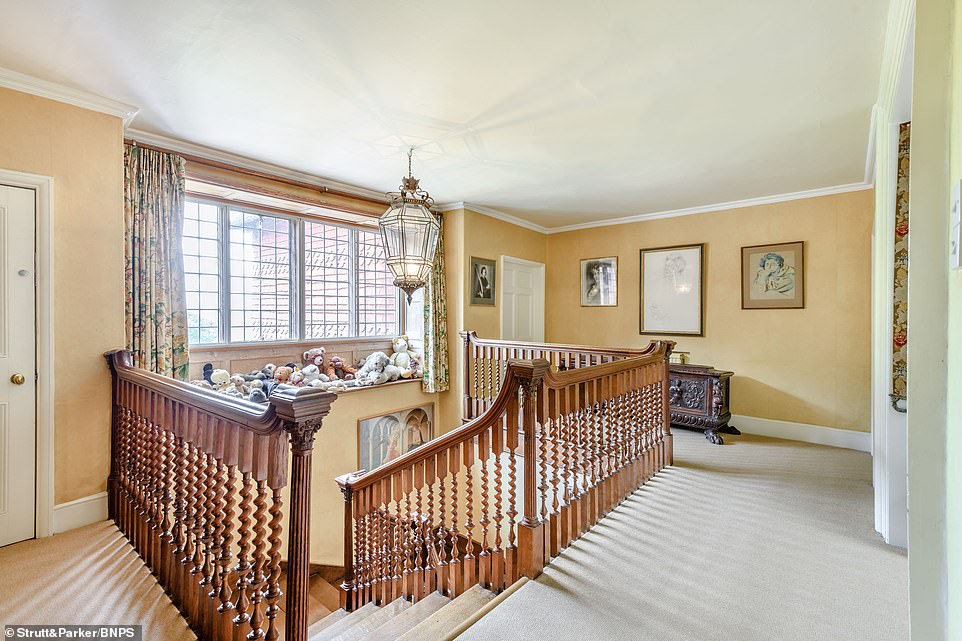 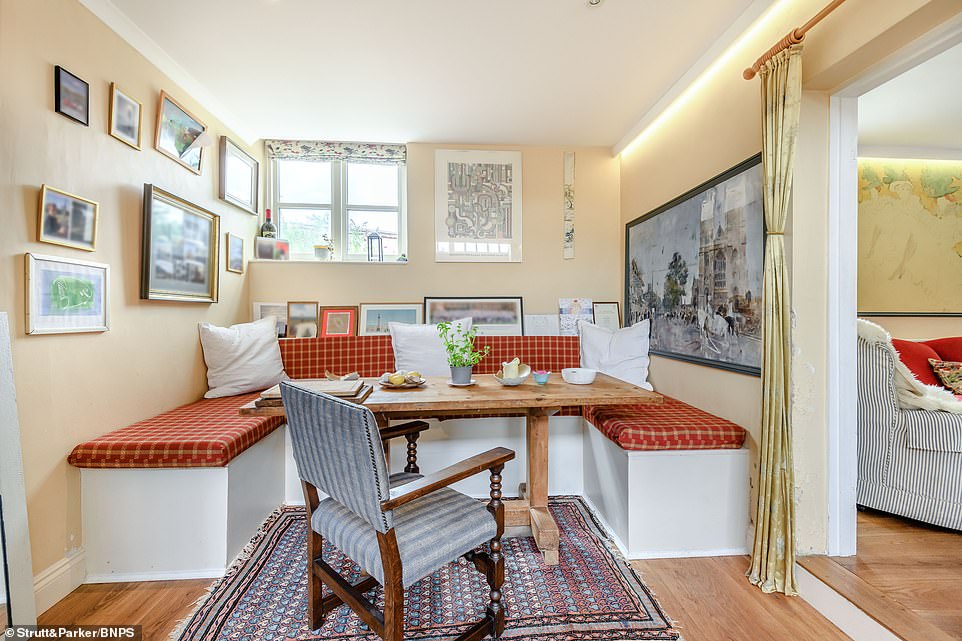 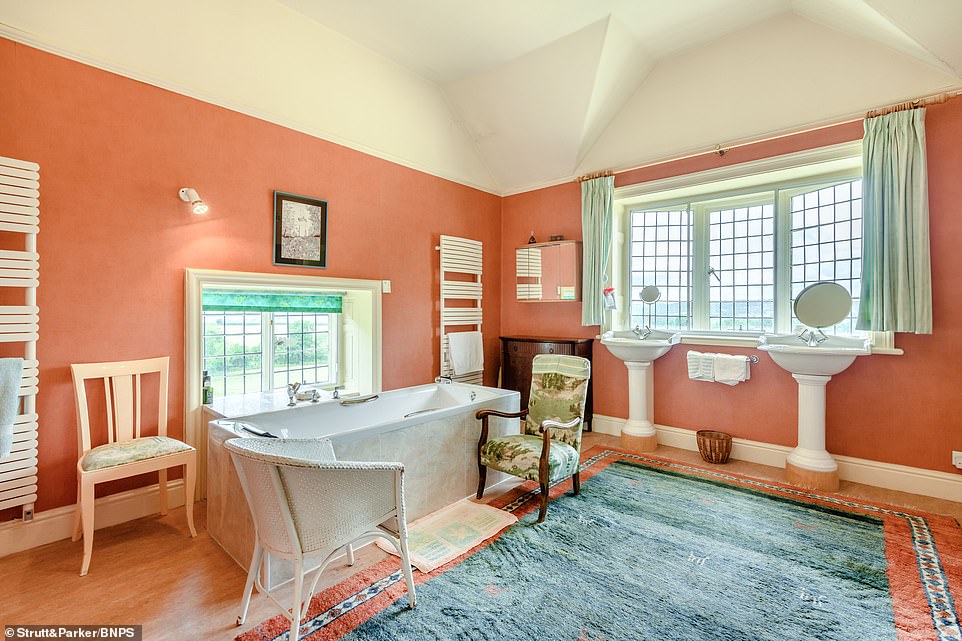 Oliver Custance Baker, from Strutt & Parker, who are handling the sale, said: ‘Sedgehill is a very nice house with a lots of history to it.

‘But it is not just an impressive house, it has also got some stunning views.

‘The property flows very well and it sits in a great position on the Dorset/Wiltshire borders – it’s so easy to get to but you’re also out in the countryside.

‘It’s been a great family home for the owners, their children have grown up there and they have maintained and improved it over the years.

‘We’ve done it so buyers can get it as a whole or in four lots, so they can have as much or as little land as they want.

‘The main plot is the house, garden and a parcel of woodland that is a riot of bluebells in the spring and a great spot for family picnics. Then there’s extra parcels of pasture land if people would like it.’