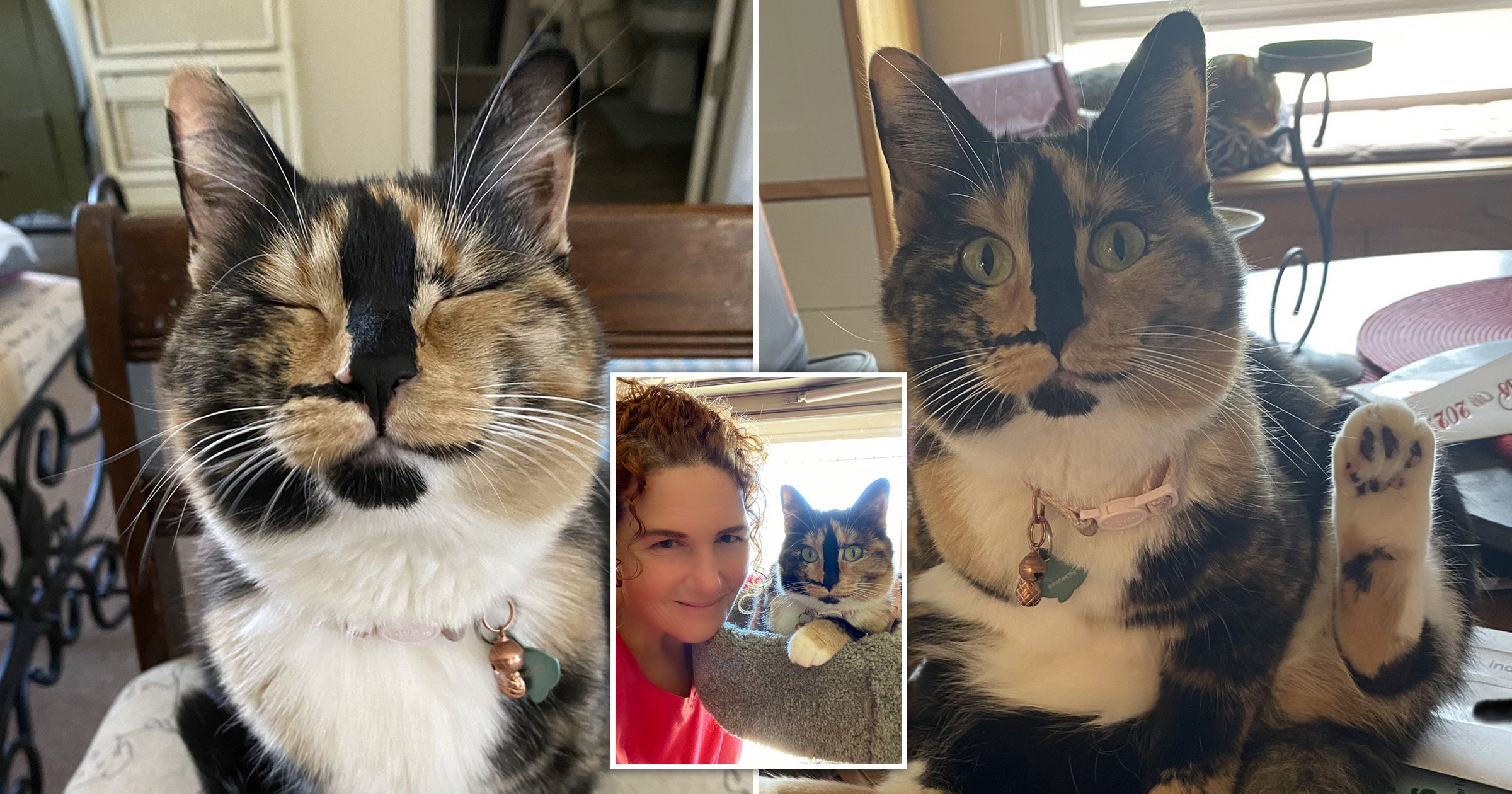 Meet Snickers, the sweet cat who has face markings that make it look like she’s always got a smile on her face.

Owner Kelly DeWeese, from Owensboro, Kentucky, said: ‘The way her face is structured and how her mouth goes up it looks like she’s grinning and smiling all the time.

‘She’s something alright – she loves playing fetch and watching television. I think she probably knows that she was rescued and is really happy.

‘She’s living her best life. If you look at what I’ve posted of her on Instagram, she gets into these weird positions as if she’s human.

‘I’ve never positioned her, I’ll just snap a picture when she’s like that.

‘She loves the camera, and when it comes out she just stares at it, and loves to look at herself. She’s a real ham, for sure.’

Snickers was found as a five-month-old kitten by Kelly, while she was out running – not long after the death of her mum in June 2020.

The 46-year-old said: ‘I’d just lost my mum a week before and had picked up running. I was in such a state of depression and that’s why I started doing it – because I thought it would help me.

‘I think that was only my second time out for a run, and this little tiny kitten wandered right out in front of me.

‘The corn stalks were tall, and it was a huge field, so I’ve no idea where she came from or how she got there.’

When Snickers was found, the poor kitten was tiny, sick and covered in fleas.

‘It must have been so scary for her out there by herself,’ said Kelly. ‘She probably knew that it was her chance to be rescued – she came out by herself, and she was very sick.

‘She could barely open her eyes, she was covered in fleas, and you could tell she had ear mites because she kept shaking her head.

‘It was about two miles from home, so I scooped her up and walked her back to the house and gave her a bath, then the next morning I took her to my local vet.’

There, Snickers underwent a host of tests and needed medications and surgeries, which cost a total of nearly $7,000 (approximately £5,700).

After several trips to the vets, Snickers was sent to a specialist a two-hour drive away to get to the root of her health problems.

Kelly said: ‘She kept sneezing all the time and couldn’t meow – there was no sound.

‘The vet tried for weeks to give her all kinds of different medication and nothing was working, she wasn’t getting any better.

‘So about four weeks in they sent me to a specialist about two hours away in Louisville, Kentucky.

‘They estimated she was about four or five months old and did a CAT scan on her.

‘That’s when they found that she had large polyps behind her eyes and that she needed to have two big surgeries to have them all removed.

‘The surgeries were six weeks apart from one another and very expensive.

‘She had the first surgery and was fine, and then she made it through the second surgery but woke up blind.

Kelly – who stresses ‘refusing’ to give up on Snickers was ‘worth every penny’ – says her (now) two-year-old cat’s constant grin gives the impression that she’s grateful for and happy with her forever home.

What’s more, she’s even got a smiley face on her paw.

She added: ‘Most people wouldn’t have spent the money I did. They probably would have taken her to a kill shelter and had her put down because she was so sick.

‘The vet here considered putting her down, but there was no way I wasn’t going to keep her – I wouldn’t give up on her.

‘Even though she was a feral cat she was very loving – always crawling on me and licking my face.

‘She was very sweet from the very beginning, so I wasn’t going to give up on her.

‘I’d got some life insurance money from my mum, so I used a lot of that for Snickers.

‘I felt like it was my mum leaving me money to help her, she would have wanted me to use that money to do something good.

‘It took a huge chunk of my savings, but you do what you have to do for another living thing, and it’s just money.’

Snickers’ online fans have assumed that her name comes from the colour of her fur, but it’s actually from something Kelly saw the day she found her.

Kelly said: ‘A lot of people think I named her Snickers because she has the colouring of the chocolate bar.

‘But at the moment I found her right by our feet was a Snickers bar wrapper that someone had littered. I just thought, “that’s it, that’ll be her name”.

‘I love her, and if other people find joy through her story then that means a lot to me.

‘It was definitely fate that we both wandered into each other’s lives – it could’ve been anybody out that morning. It was meant to be, and I think we both saved each other that day.’