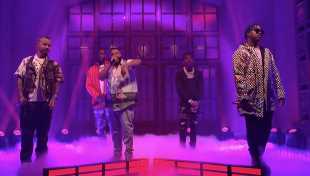 DJ Khaled got the big honor of being the musical guest to close out season 44 of ‘Saturday Night Live.’ He brought along pals Lil Wayne, Meek Mill and more star power for two huge songs.

DJ Khaled promised big things for his first ever Saturday Night Live musical performance and boy did he deliver. His new album Father of Asahd dropped on May 17, one day prior to his appearance and it was filled with superstar collaborations. He decided to roll out a slew of stars to join him onstage. Since Khaled is a hype man, he let Lil Wayne and Big Sean take over the bars for their new song “Jealous.” Then Khaled brought even more celebrity power, rolling out Meek Mill, Jeremih, Lil Baby and J. Balvin for their new collab “You Stay.” It was almost hard to keep up with the level of stars all on one stage.

As if that wasn’t enough, for his second performance he brought out SZA to sing their song “Just Us,” then a piano turned around to have John Legend seated and playing “Higher.” That turned into a Nipsey Hussle tribute as the late rapper appeared on that song off Khaled’s new record.

On May 16, Khaled, 43, bragged to Hot 97’s Megan Ryte about how epic his SNL appearance would be. “You’re going to think it’s an award show, all your favorite artists, whoops…” he spilled without giving away who would be joining him onstage. He continued “My first time on SNL, it’s a dream come true, and I knew I was gonna get it one day because I’ve been trying to get it for a long time I’m going to make sure we make it the most legendary Saturday Night Live.”

Khaled — who has had epic collabs in the past with Rihanna, Justin Bieber and more — said his new album is his best work to date. “We gonna change the game…The 11th album is the new chapter of more success, more blessings, more loves and what I did with this album. Not only is it my best work, that bar going to be high, really high.”

His album’s cover features a photo of himself and his two-year-old son Asahd dressed in nearly identical pink, blue and orange tropical print shirts. Khaled has always  made his son a huge priority, bringing him to awards shows and heaping praise on his mini-me. By including his name in the album title, he told Megan, “This is my life, I do it for Asahd.”