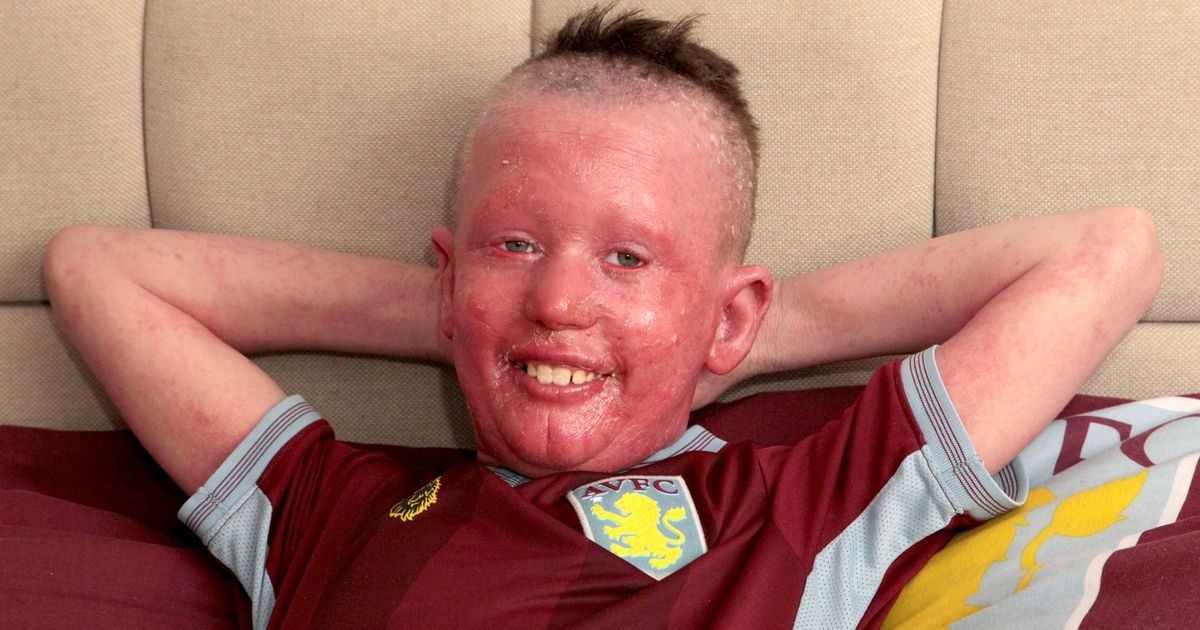 The parents of a 10-year-old boy with a rare skin disorder have been forced to carry cards explaining their son's condition – after rude strangers left him distraught by staring at him in the street.

His parents Daniel and Julie, from Nuneaton, Warks, have now been forced to print cards with information on about Netherton Syndrome in a bid to spare their son's embarrassment.

The couple clean Jack's skin for two hours each day so it doesn't became dangerously sore or at risk of infection.

They said that the stress of dealing with his condition has caused them to both have nervous breakdowns.

Daniel, 41, a manager for Royal Mail, said: "Parents used to pull their kids away from him when we went out now we have to go to what we call 'safe' places where the staff know us.

"We get stares and looks, people ask if we scalded him.

"When we were on holiday a family were sitting having dinner. We were walking past and the whole family turned past and their jaws dropped.

"I told them 'excuse me my son has a rare skin condition'. I don't think people really realise what they're doing, we don't want to get upset."

Daniel added: "Jack said: 'I don't want to take my hat off because people won't see me'.

"Some troll online saw a picture of Jack and called him a 'devil child' and kept sharing it. It was horrendous."

It's a condition so rare that only one in three million people worldwide are believed to have it.

The condition causes Jack's skin to become red and scaly which makes him susceptible to potentially life-threatening skin infections such as septicaemia or sepsis as well as severe allergies.

It is a genetic disorder caused by the lack of a specific protein called LEKTI (lympho-epithelial kazal type related inhibitor), which is a serine protease inhibitor.

The absence of this protein leads to a profound defect in the outermost part of the skin, 'the skin barrier'.

Jack was diagnosed with the condition at five-weeks-old and doctors believed he inherited the condition from his parents who both carry a faulty gene.

The football-mad youngster has to go through a rigorous daily routine to wash his skin before being covered in paraffin ointment to ensure his fragile skin is properly protected.

His condition means that he finds it difficult to go outside during warm weather for extended periods and is often up all night scratching his painfully uncomfortable skin.

Jack said: "For a long time it's hurt me and it's made me feel sad.

"But I've got a really good group of friends who help me.

"I'm just as normal as everyone else."

Dad Daniel added: "We carry cards with us with an explanation of what his condition is about to give to people discreetly."

"Sufferers are at high risk of getting infections and have no body temperature control.

"This condition affects 1 in 3 million in the world."

Julie, 47, a part-time care worker added: "We make sure that he has a really good life but sometimes if we go out it can be tarnished. People stare and I'll try and ignore it but it just breaks my heart.

"He doesn't get invited to many places and when we go on holiday he'll cover up.

"I still get upset now but you have to pick your battles and get on with it. We have to be as positive as we can, it's about the person, not just how he looks."