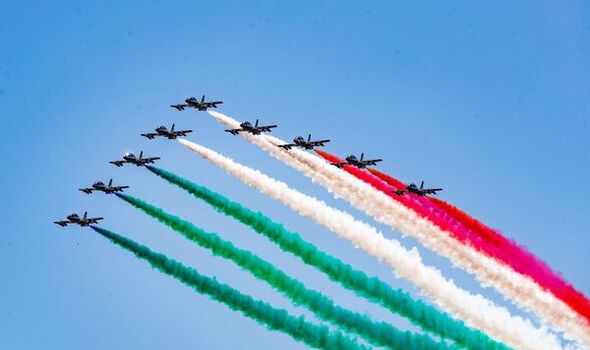 They were to close the event with their signature move – the pierced heart. This saw nine of the ten-strong team peel off in opposite directions – forming hearts with their coloured gas trails – with the tenth member left to fly through the middle.

The solo pilot was Lt Col Ivo Nutarelli, a 38-year-old veteran who had performed the stunt 70 times. On the fateful afternoon, however, he got his timing wrong. His dive came in too low and too fast and there was a horrific collision.

Three planes fell from the sky, with Nutarelli’s hitting a grassy area just in front of the crowds, his jet fuel exploding on impact. It cartwheeled through fences, across an access road and into the crowd.

Described as the best seats in the house, the area of impact was packed with spectators.

The incident was over in seconds and the crowd did not have a chance. Seventy people died, including the three pilots, and 346 spectators were seriously injured.

Further confusion was caused when US authorities initially refused to allow German ambulances onto the airbase. The lack of co-operation was heavily criticised.

Public airshows were banned for three years in the aftermath of Ramstein, and stricter safety measures, including a designated distance for spectators, have been introduced.

It remained the deadliest airshow accident in history until the Sknyliv air show disaster in 2002, which saw a Ukrainian jet crash, killing 77.