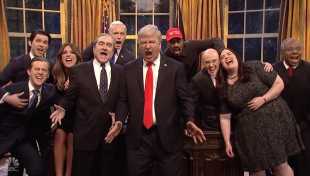 For the final cold open of ‘SNL’s 44th season, Alec Baldwin returned as Donald Trump to sing a version of Queen’s ‘Don’t Stop Me Now,’ where he brought up everything he’s got  away with in office and how Democrats can’t stop him.

It can be a coin toss whether Saturday Night Live will go with something political or pop culture related for their cold open. Since the show’s 44th season is coming to a close with the May 18 live broadcast, TPTB brought back Alec Baldwin as Donald Trump for a presidential message. He said how he was looking forward spending his summer “visiting friends in prison” and  “enjoying all of he fantastic new tariffs we have with with China,” he then broke out into song. Set to the tune of Queen’s “Don’t Stop Us Now,” he sang about all of the things he’s been able to get away with as president, along with all of the plans his Republican buddies have in store for the country and how the Democrats were powerless to stop him. Robert DeNiro even came in to do a Robert Mueller cameo, saying “I’ve got something very important to say to the American people” before Alec interrupted him to say “NO COLLUSION” and went back into his song.

On the show’s penultimate episode on May 11, the cold open featured a mock up of NBC’s Sunday morning political show Meet The Press where they skewered how there’s pretty much nothing President Donald Trump could do that would lose him support of Senate Republican leaders. Sketch players Mikey Day, Kate McKinnon and Aidy Bryant played Republican Senators Mitch McConnell, Lindsey Graham and Susan Collins and were peppered with questions by “Chuck Todd.”

He asked Kate/Lindsey what he would do if Trump backhand slapped him in the face and his/her response was “Harder Daddy.” Chuck asked seriously WHAT if anything could cause them to not support Trump. “Let’s say hypothetically he got gay married,” Mikey Day‘s Mitch began with Lindsey chiming in “To the leader of Isis” while Aidy Bryant‘s Susan added “and they had matching diapers fashioned out of the original Constitution” before it went back around to Mitch who said “Then maybe…oh who are we kidding. We’ll always be ride or die bitches.”

It was a marked turnaround from the May 4 cold open that featured It featured a hilarious skit parodying the two top pop culture events of the moment, with characters from the biggest opening movie in history Avengers: Endgame and the biggest TV show Game Of Thrones with their characters going head to head in a game of Family Feud.  While the Avengers crew blew it with bad answers, the GOT cast wasn’t  faring much better until Arya Stark (Melissa Villasenor) dropped in out of nowhere to blast the line “NOT TODAY.” That was Arya’s epic response during the battle of Winterfell when asked “What do we say to the God of Death?” by Melisandre. She then went on to successfully kill the Night King and save Winterfell.