Anthony Albanese likes to remind people of where he has come from: public housing, son of a single mum, Sydney’s inner west.

It is a well-warn narrative. He also likes to spruik himself as a diversity candidate. 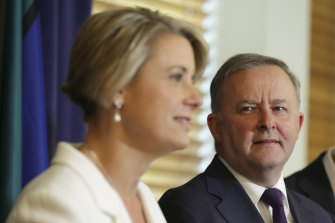 Kristina Keneally’s decision to contest a lower house seat has ignited a debate about ethnic diversity in the Labor Party.Credit:Alex Ellinghausen

In fact, he says it will be a first at the next election that there’s someone called “Albanese” running for prime minister.

“If you look at the names who’ve run for the highest office in the land, of prime minister, they’ve all been people with Anglo-Celtic names across the board,” he said a few days ago.

“I’m putting myself forward, very proud of my background and very proud to lead a party that has advanced multiculturalism, particularly in the post-war period.”

Labor’s infighting during the past week over Kristina Keneally’s decision to contest a lower house seat in Sydney’s west, pushing aside a young lawyer from the electorate’s thriving Vietnamese community, has brought forward the issue of diversity in Federal Parliament.

Some of that debate has been quite genuine, some of it has been opportunist. There is little doubt that some in Labor who see Keneally as a future rival have shamelessly used it as an excuse to argue against her dropping to the lower house. Others have their heart in the right place.

But it has brought on raw and sensitive debate within the ranks as to how well the party is doing when it comes to reflecting the people it represents.

Ed Husic, who has been reluctant to be defined as the first Muslim MP to be elected to Federal Parliament, strongly supports Keneally’s move but concedes the diversity ranks are still quite bare.

“I think it is important that the parliament reflects the communities it represents,” he told the ABC on Monday afternoon.

It was an important intervention from the western Sydney MP, who says while one preselection is not going to solve the issue, “serious conversations” are needed within the party.

Like his shadow cabinet colleague Jenny McAllister, Husic agrees the party needs “bold goals” to ensure there is ethnic diversity. Maybe through quotas or maybe just through a concerted effort.

Egyptian-born pair Anne Aly, the first female Muslim elected to Federal Parliament, and Peter Khalil, the only Copt, both called on Labor to be better at multiculturalism at the weekend.

It is an issue that is not going away for Albanese nor the Labor movement. The rank and file, through candidates such as Tu Le, now has a voice and is prepared to use it.

As Khalil pointed out, non-Indigenous people of colour (Asian, African, North African, Middle Eastern and Pacific Islanders Australians) make up only 4.1 per cent of Federal Parliament even though they are 21 per cent of the Australian population. He says other countries, such as Britain, Canada and the United States, are doing a better job of electing people from different backgrounds.

The debate again highlights Labor’s continued tightrope when it comes to creating broader appeal to Australian voters. The challenge is not only Labor’s, but its long stint in opposition has shown it has struggled most with meeting it.

The other side of the issue came to a head on Monday when veteran MP Joel Fitzgibbon announced he would be pulling up stumps at the next election.

Despite their differences over the years Albanese and Joel Fitzgibbon have always been joined by the fact they both entered Parliament at the same time the Hawke-Keating era ended.

Fitzgibbon’s departing advice to his leader and fellow ’96er? Resist the urgings of the elitist and idealist excessive progressives who seem determined to consign Labor to perpetual opposition.

Embracing the true values and faces of Labor’s diverse constituencies might just be a way to do that.