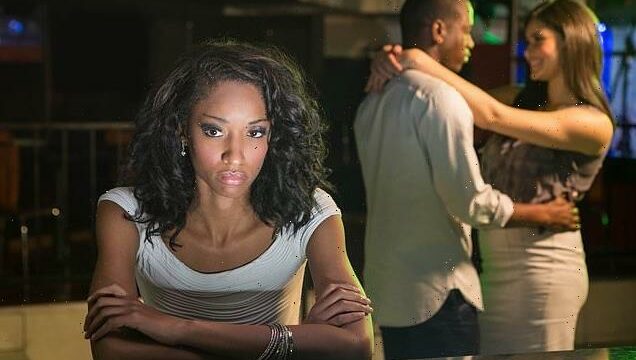 A woman divided opinion after she asked whether she should try and end her former flame’s engagement so she could marry him instead.

The unnamed British woman took to Mumsnet to explain she met the man at university and they’ve been seeing each other ‘casually’ on-and-off for 10 years but ‘timing and awful circumstances’ meant they never committed to each other.

While they were ‘flirting’, he met someone else and quickly fell in love. He proposed and now they’re set to marry.

The woman explained that the revelation has made her ‘realise she’s in love’ and asked whether she should try and ‘break up the engagement’.

The majority of users blasted the woman for even considering it, saying it is the height of selfishness. However a handful of others said it was a reasonable thing to do, as long as she’s sure she wants a future with him. 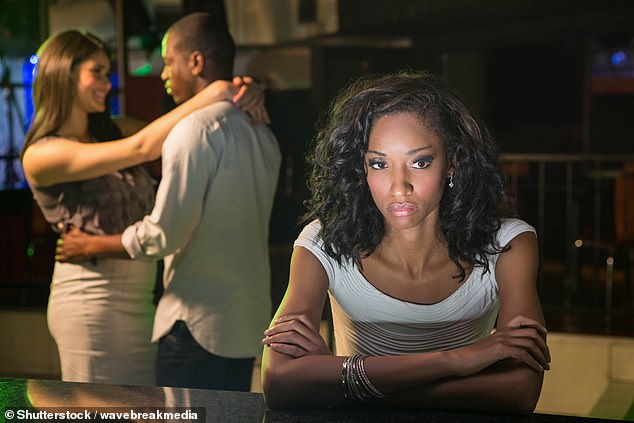 In the original post, the woman explained that the pair had never fully committed to each other but has been seeing each other for ten years

Explaining the situation, the woman wrote: ‘I realised I’m in love with a guy I met in Uni, I used to casually see on/ off for around 10 years, and suddenly he’s met someone and they’re engaged.

‘We were still flirting when this new relationship started (which is annoying). When he told me about the wedding his words were “You had so many chances”.

‘So.. my question is should I tell him how I feel before it’s too late and potentially ruin the engagement?’

She later provided more context, adding: ‘Now is my only chance to, I can’t exactly tell him when he’s married! I knew him first and it was always timing and awful circumstances that got in the way!’ 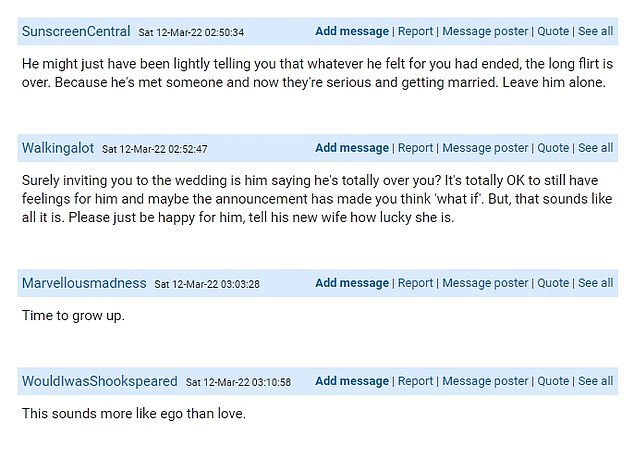 The majority of users blasted the woman for even considering it, saying it is the height of selfishness

Dozens of commenters warned her against telling him, saying that ‘life is not a rom-com’ that has a ‘happy ending’.

Others said that he had his chance to propose to her and didn’t, suggesting they maybe wouldn’t be right for each other after all.

One user wrote: ‘To tell him now would be unfair to all three of you.

‘You have had 10 years to make a proper go of things with him, but you never did. Your feelings right now are due to the fact he’s been removed as an option by a choice that wasn’t yours, giving you the “what ifs”.

‘He was wrong to be flirting with you after the start of this relationship, but there must be something about this girl that he’s made the commitment of first being seriously dating, then proposing to her, when he never did either with you.’

Others said that he had his chance to propose to her and didn’t, suggesting they maybe wouldn’t be right for each other after all

Another posted: ‘You’ve suddenly realised how you feel about him, now that he’s in a serious relationship with someone else? After a decade of not bothering to do anything about it? Are you serious?’

A third added: ‘Surely inviting you to the wedding is him saying he’s totally over you? It’s totally OK to still have feelings for him and maybe the announcement has made you think ‘what if’.

‘But, that sounds like all it is. Please just be happy for him, tell his new wife how lucky she is.

However others urged her to ‘give him all the facts’. 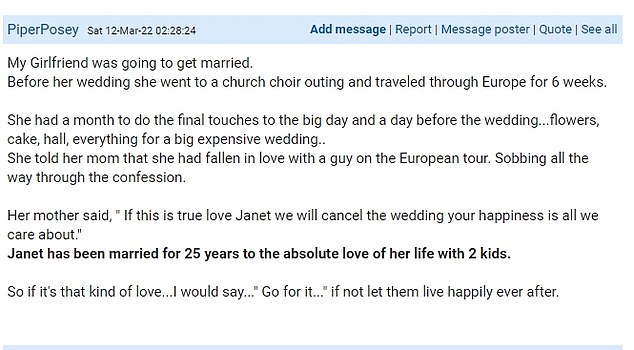 One person said: ‘Tell him! He needs to have all the facts before he gets married. But you may not like his answer.’

Another advised: ‘Yes tell him if he feels the same way then his fiancee has had a lucky escape. He may still have feelings for you which is unfair on her.’

A third thought the marriage would be a sham if she didn’t come forward, saying: ‘I would tell him for his fiancée’s sake. If he’s not completely committed to her and willing to dump her for you then she should know before she marries him.’

A handful questioned whether the post was real and said it sounded like the plot to My Best Friend’s Wedding.

‘Didn’t Julia Roberts and Cameron Diaz already do this plot?,’ one asked.