Style reinforcements were rallied across the Atlantic with Selena Gomez, Maid actress Margaret Qualley and Kirsten Dunst enthusiastically waving the red, white and blue at the Critics Choice Awards in Los Angeles, following a British fashion blackout at the BAFTAs in London.

The awards’ season is in full, post-pandemic flight with trends changing by the hour as both the Critics Choice Awards and BAFTAs took place on the same day, in the lead-up to the Oscars on March 28. While a sombre aesthetic reigned in England as Australian comedian Rebel Wilson ushered in a sea of black gowns, in the US it was full Auntie Sam patriotism on show as a distraction to events in Ukraine. 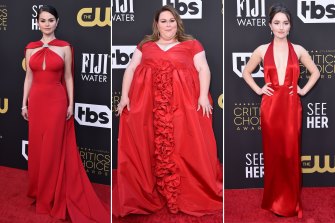 Riding the crimson tide of gowns was Only Murders In The Building actress Gomez, wearing a retro Louis Vuitton halter-neck gown with a cape and keyhole bust. In her wake came Dopesick’s Kaitlyn Dever in a red satin Miu Miu halter-neck gown with plunging neckline and This Is Us actress Chrissy Metz in a custom Greta Constantine dress, anchored by a ruffled centrepiece.

The Power of the Dog’s Dunst stuck to the paler end of the blue spectrum in an understated smock dress plucked from the collection of new French couturier Julie de Libran, with Queen & Slim’s Jodie Turner-Smith turning up the voltage in a single-sleeved, high-necked Gucci gown. Pose’s Michaela Jaé Rodriguez took out the cobalt category in a single-shouldered top worn over bone wide-legged trousers from Valentino. 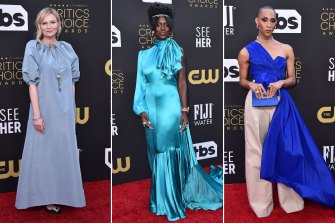 The overall effect felt like a delayed reaction to last year’s underwhelming Met Gala in September, where stars seemed puzzled by the theme In America: A Lexicon of Fashion. Perhaps their online shopping orders had been delayed as a result of the pandemic.

Making up for missing the Met Gala was Lady Gaga, who attended the BAFTAs in London wearing a forest green velvet gown by Ralph Lauren, before changing into a Gucci gown with a gold skirt and train and curious black bra cups at a special off-site red carpet for the Critics Choice Awards. 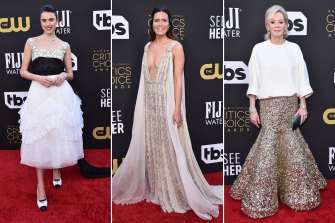 White on the night. Margaret Qualley in Chanel, Mandy Moore in Elie Saab and Jean Smart in Valentino at the Critics Choice Awards.Credit:AP

The second dress was a perfect transatlantic moment, combining American ebullience with British austerity. At the BAFTA’s black ensembles dominated, with Belfast’s Caitriona Balfe in power-shouldered Armani Privé and Stranger Things′ Millie Bobby Brown all grown up in a slashed Louis Vuitton dress.

While their colours clashed, the common silk thread between both awards ceremonies was traditional glamour, with sustainability and gender-fluidity barely rating a mention. It’s a rare moment in fashion when stylists choose to look behind them, perhaps scared of what’s ahead.