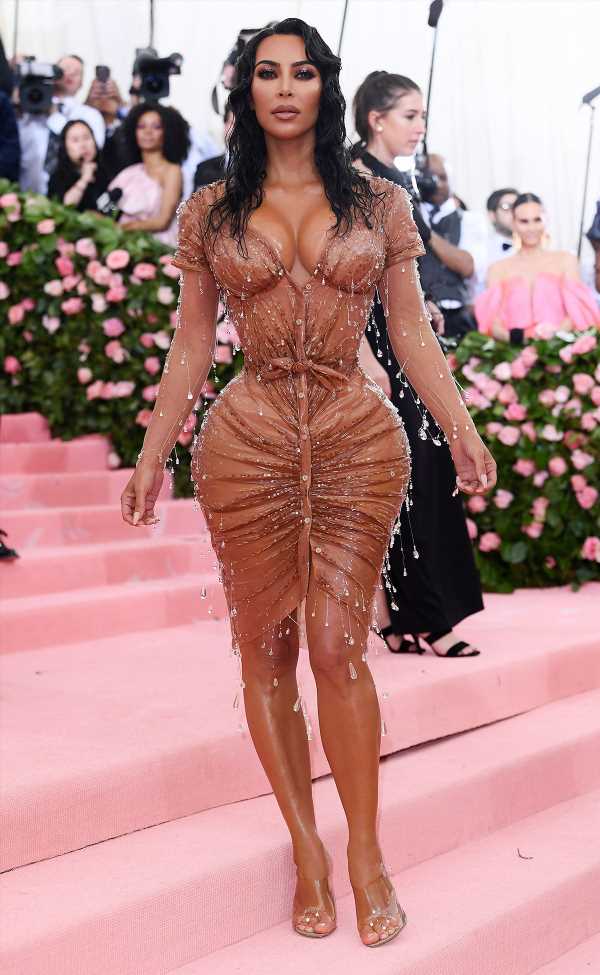 “This is the first time in 20 years Mr. Mugler has designed for the House of Mugler. So to come and design this gown for me is such an honor,” Kardashian West told Vogue on the red carpet. “This is about eight months in the making … He envisioned me this California girl stepping out of the ocean, wet, dripping.”

Kardashian West completed her look with “wet” hair (something she’s done before) and droplets on her nails, and ahead of her red carpet moment, posted photos to her Instagram story of Sophia Loren in Boy on a Dolphin, donning her iconic sexy wet dress — possible inspiration.

Mugler has been Kardashian West’s go-to designer of late; she wore a skin-baring vintage design to the Hollywood Beauty Awards in April, and days later, donned two structured dresses by the French designer for a Mugler exhibition opening in Montreal.

“He always, it’s a full vision from, you know, hair to nails to everything,” Kardashian West told PEOPLE of Mugler earlier this year. “His runway shows were the most legendary and iconic runway shows ever.”

Asked by Vogue what her favorite part of the Met Gala experience is, the Keeping Up with the Kardashians star said, “Once we’re all at the top of the carpet we can all take a deep breath.” But, she added, “I don’t know if I can in this corset. I honestly had to do practice. It’s a proper corset by Mr Pearl. I never had one like this, it is insane.”

She has a reward coming for the suffering, though: “I have doughnuts waiting for me tomorrow morning, hot, fresh doughnuts,” she said. “They are special ones from here vanilla with rainbow sprinkles.”

Be sure to check out all of PEOPLE’s Met Gala coverage to get the latest news on fashion’s biggest night.

Monday night marked a return to the Met Gala for West, 41, who hadn’t attended with his wife since 2016. The reality star credits her husband as the influence behind most of her looks. “He makes my life so easy,” she told PEOPLE in 2018. “I really do get all of my inspiration from my husband.”

He also helped foster her tight-knit relationships with some of the fashion industry’s most powerful designers. “My style has definitely evolved,” she said. “When I met Kanye and he really started to bring me to Paris he introduced me to a bunch of people. I think one of the first people I met were [designers] Riccardo Tisci and Alber Elbaz.”

But Kardashian West’s love of fashion started at a young age, thanks to some help from mom Kris Jenner‘s incredible closet.

“When I was 16 whenever the time was coming for prom, I would go through my mom’s closet — it was always Mugler, Alaïa, Versace, Chanel — she had the best wardrobe,” the star told PEOPLE. “She would always be really generous and share her things with us, like I always wore her Alaïa dresses to parties.”

She added: “To this day she saved so much of it and she’s given some really cool pieces to me and my sisters. That was such a fun time.”