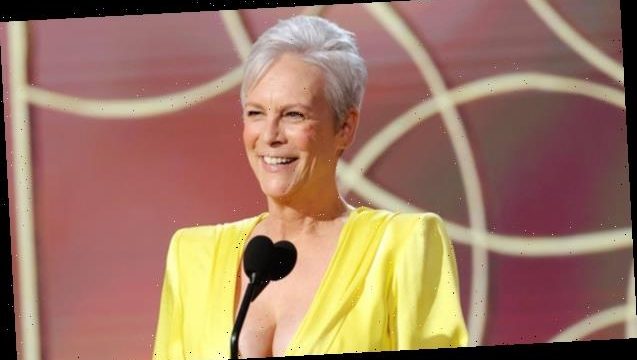 We’re screaming and not because we’re watching Halloween. We’re just freaking out over Jamie Lee Curtis‘s gown at the 2021 Golden Globes! The 62-year-old Halloween star glided onto the award show stage in a satin yellow dress with a deep V-cut from Alex Perry to present the award for “Best Supporting Actress” in a film at Sunday night’s event on Feb. 28. The winner turned out to be Jamie’s “friend.”

“What a thrill to salute front line workers and a talented group of actresses AND call out my friend, Jodie Foster as the WINNER for Best Supporting Actress for her work in [The Mauritanian],” Jamie wrote underneath an Instagram photo of her Golden Globes look. She also thanked her glam team: hairstylist Sean James, makeup artist Jo Strettell and Jane Ross. Jamie also tagged the Instagram account for the studio Cathy Waterman, which designed her jewelry.

Fans took to Twitter to rave over Jamie’s gorgeous dress, and many couldn’t pass up on an opportunity to sneak in a joke about Activia (Jamie was an ambassador for the yogurt brand). “Jamie Lee Curtis looks so good … pass me the Activia,” one fan tweeted, while another wrote, “Jamie Lee Curtis proving Activia works! Looking stunning at the #GoldenGlobes.” A third fan gushed, “Okay, why does Jamie Lee Curtis look so good for her age? Like, Activia does a body good.”

Jamie wasn’t the only fashionable guest at the 2021 Golden Globes! Emily In Paris star Lily Collins also made heads turn (through the computer screen, that is) in a sparkly dress, while Tiffany Haddish looked beautiful per usual in a sequined dress. The pandemic also didn’t stop these stars from dressing up, just like it didn’t stop the Hollywood Foreign Press Association from enlisting A-list celebrities like Kenan Thompson, Joaquin Phoenix, Awkwafina, Renée Zellweger, Kristen Wiig and Sterling K. Brown to present at the show.