Fashion Week is a broad church, and on Thursday, the worshippers came to honour one of the greats.

Closing the industry portion of the six-day sartorial spectacular, veteran designer Carla Zampatti staged a show that included a performance by the Australian Brandenburg Orchestra. 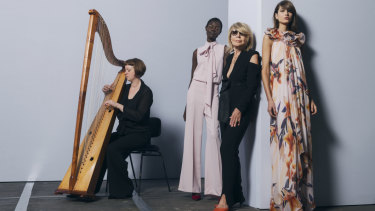 Zampatti, who turns 77 on Sunday, has had one of the most theatrical starts to 2019, starring as the Grand Showcase designer at the Virgin Australia Melbourne Fashion Festival, and now closing Mercedes Benz Fashion Week.

"I think to myself, what am I doing to myself, but I see it as two opportunities – I couldn't say no," Zampatti said. "They only come along once or twice."

A committed lover and patron of the arts, Zampatti said she was thrilled to "merge two of her passions, fashion and music". Zampatti's Melbourne show included a performance by singer Dami Im.

"The orchestra loves the idea of doing something different. This kind of venue and audience enlarges their reach, too," Zampatti said. 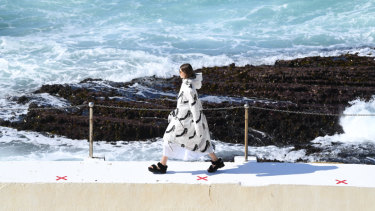 The 41 looks shown from the forthcoming collection included Zampatti's signature black and ivory colour palette in stripes and spots, as well as sequinned animal prints, popping yellows and, in something of a departure, a tigerlily print.

The show was, arguably, Fashion Week's most high-brow moment, after it experienced its most low-brow one the previous evening at Luna Park and the Justin Cassin show.

Cassin was roundly criticised for a show that not only ran more than an hour behind schedule, an issue that plagued Monday's schedule but had largely come good by Wednesday, but also included dancing and musical acts that were deemed to be in poor taste.

Ivan Bart, president of IMG, which stages the event, said the company encouraged designers to express "their creative vision in unique and varied show formats".

The reporter travelled as a guest of IMG.