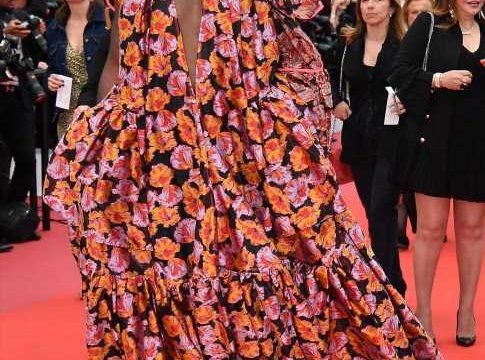 The Cannes Film Festival is known for being one of the most glamorous red carpets in the world. A-list movie stars, top supermodels and more gather to screen and discuss some of the biggest films of the year, and because of the festival’s strict dress code, they usually bring their sartorial A-Game.

According to Vogue World, men must wear tuxedos with bow ties (see Brad Pitt and Leonardo DiCaprio), while ladies are required to pair their evening dresses with heels. But what happens when someone tests the decades-old dress code? Parisian DJ, Kiddy Smile, just found out.

Smile was on-hand to perform at an after party and walked two red carpets during his time in Cannes. After attending last year wearing a tuxedo, he decided to switch up his approach this time. He arrived to the premiere of Atlantics in a high-shine jumpsuit featuring holographic  fringe and a plunging sheer neckline  — a look which he actually sewed himself!

“The night before, I actually didn’t sleep because I was sewing my outfit,” Smile told Vogue World in a new interview. “I was very nervous because I’m not very good at tailoring and sewing, but I had no choice — I don’t fit sample sizes unless I ask in advance, and I was very, very nervous because of the protocol.”

So how was he allowed onto the red carpet without wearing a tuxedo? He told Vogue World that a photographer called him onto the carpet for a photo when he reached the entrance, and he was able to sneak past officials at the door, adding that he most likely wasn’t stopped since he was early in the lineup of celebrity arrivals.

But the next day proved to be trickier. He arrived to the premiere of Dolor y Gloria in an even more dramatic outfit — a floral-print orange and pink pleated, tiered ball gown with plunging neckline. When he got to the door an attendant asked if it was traditional African outfit. When Smile explained that it wasn’t, the attendant told him he could not enter the carpet. A female supervisor then joined the conversation and told Smile she wanted him to walk the carpet.”

“It’s just hilarious to me that if you’re a black person, and you wear something that looks like a gown, people are going to ask you if it’s a traditional outfit,” Smile told Vogue World.

He added: “For men, you have to wear a black tuxedo and a bow tie. There’s something very old school about it. I’m a cis man but if you’re gender-fluid or nonbinary, there is no space for you to exist within this protocol.”

After testing the boundaries of the dress code, he said he’s “happy” he was able to do it.

“I’m so happy that I got to do this, and be myself, and wear something that looks like me, that’s representative of my personality,” Smile said. “I think it’s good that a festival like that is starting to think about how the world is opening up, and it’s good that these institutions are starting to bend their rules a little bit for people that don’t feel like they’re welcome in those spaces.”

While Smile demonstrated one of the strongest stances against the tuxedo and bow tie policy, a few actresses have been bending the rules in recent years when it comes to the footwear policy.

In 2015 reports surfaced that women were being turned away from the festival’s famous stairs for wearing fancy flats instead of stilettos. Many spoke out against the situation including Emily Blunt and Senna director Asif Kapadia, who corroborated reports that even older women and women with disabilities were turned away from the Carol premiere and instructed to come back when they had bought appropriate shoes. But a Cannes spokesperson told the BBC by email at the time that there were no such restrictions in place. “Rules have not changed throughout the years (tuxedo, formal dress for gala screenings) and there is no specific mention about the height of the women’s heels as well as for men’s,” the spokesperson explained. Festival director Thierry Fremaux also Tweeted that the reports were “unfounded.”

The following year, Julia Roberts made her first Cannes appearance one to remember. She walked the carpet in an off-the-shoulder black Giorgio Armani Privé gown while barefoot.

Kristen Stewart followed suit in 2018 by ditching her heels while in the middle of the carpet. After posing for a few pictures in her silver minidress with long sleeves by Chanel and black Christian Louboutin heels at the premiere of Spike Lee’s BlacKkKlansman, she walked the rest of the carpet barefoot.

She opened up about the issue to The Hollywood Reporter saying that wearing heels is still an unwritten rule. “There’s definitely a distinct dress code, right?” she said. “People get really upset at you if you don’t wear heels, or whatever. But you can’t ask people that anymore. It’s kind of a given. Like, if you’re not asking guys to wear heels and a dress, you cannot ask me either.”

Between actresses breaking down dressing norms and Smile’s bold commitment to staying true to his style, it seems that the Cannes old school red carpet dress code is slowly fading away.