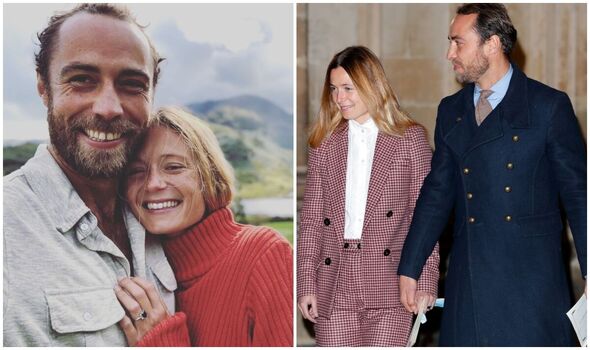 Alizée Thevenet, 32, is a financial analyst who tied the knot with Kate Middleton’s younger brother James in 2021. Mrs Middleton hasn’t shared close-up pictures of her vintage rock on many occasions.

However, the glimpses royal fans have had show similarities with several royal ladies.

James and Alizée announced their engagement by sharing a romantic selfie with Alizée’s left hand resting on her then-fiance’s chest against the backdrop of the rolling hills.

“She said OUI. Our secret is out but we couldn’t be happier to share the news,” James wrote in the caption, showing off his bride-to-be’s trilogy engagement ring consisting of an emerald cut sapphire and diamonds, which is thought to be worth up to £50,000.

“That sapphire ring is gorgeous,” commented one, and another added: “I need a close-up on that gorgeous ring wow!”

“It is elegantly flanked by baguette diamonds in the Art Deco style and most probably set in platinum.

While many were quick to compare Alizée’s ring to her sister-in-law Kate’s iconic oval sapphire, which originally belonged to Prince William’s late mother Princess Diana, the current Princess of Wales is not the only one who may have inspired James.

But royal fans may have also spotted the similarities between Meghan Markle’s and Alizee’s rings.

The trilogy ring soared in popularity following Prince Harry’s proposal to the Duchess of Sussex in 2017, which saw him present the royal with a sentimental rock made up of three special diamonds from Botswana and Diana’s private collection.

Alizée’s three-stone design was visible once again on her wedding day in Bormes-Les-Mimosas in September 2021.

Holding onto her new husband’s arm, the bride paired her sapphire with her simple wedding ring and her boho Bardot embroidered gown, which was on loan from her mother-in-law Carole Middleton.

“My something borrowed was in fact my dress from my mother-in-law Carole who last wore it 41 years ago on her wedding day in June, 1980,” she explained.

The dress was a white floor-length gown featuring a Bardot neckline and embroidered detailing.

She added that she first tried on her future mother-in-law’s wedding dress during lockdown, when she and James were residing in Bucklebury, Berkshire with his parents.

Citing sustainability reasons as to why Alizée re-wore Carole’s wedding dress, she claimed that it had “always troubled” her that bridal gowns are only worn once and never again.

To finish off her elegant look, the bride wore her hair in a chic half up half down style, secured in place with a flowing veil.

Her meaningful outfit choice was very different from James’ siblings Kate and Pippa.

The Princess opted for a timeless gown from Sarah Burton of Alexander McQueen with long lace sleeves and a full skirt, while Pippa stepped out in a high-neck, cap-sleeved ivory gown from British fashion designer Giles Deacon.