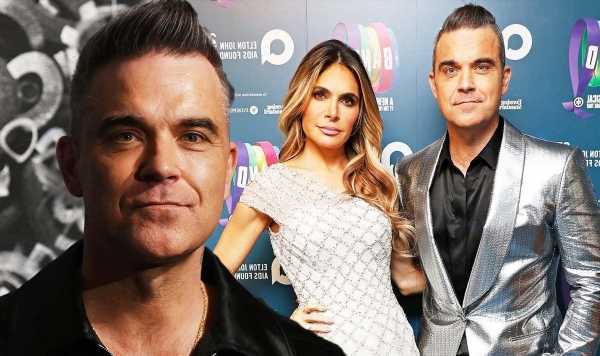 Robbie Williams, 48, has candidly opened up on his previous love life before he settled down with his wife Ayda Field, 42. The Angels singer did not hold back as he recounted sleeping with his drug dealer moments before his first date with the mother of his children.

Speaking of the moments prior to his and the Loose Women star’s first date, Robbie made an honest admission.

He said: “My drug dealer had just left, I’d slept with her and she’d left me a bag of drugs.”

“I’m so square, I had no idea about any of that,” Ayda added during their joint interview, which has been unearthed ahead of Robbie’s Soccer Aid performance this evening.

And while Ayda had “no idea” about his romance with the drug dealer, she pointed out that his living conditions were “quite sad” when they first met.

But the pair immediately realised that they had special chemistry between them.

Ayda continued to You Magazine: “Suddenly I sensed this electricity. It was like Rob understood the fibre of me.

“I wanted to say, ‘Did you just feel that?’, but I would have seemed like a freak.

“Much later, Rob was telling someone about that night and said, ‘There was this amazing moment on the couch when I fell in love with her.’

Ayda and Robbie had previously spoken out on how she and Robbie first got together during a conversation with the Loose Women panel.

Appearing on the ITV programme in 2019, Ayda was asked whether the pair had found love at first sight.

Ayda explained: “At first it was incredibly awkward and weird and then there was a moment on the couch.”

“I had that like ‘Oh my God did you just feel that’ moment.”

And Robbie went on to reveal how he felt he had known his wife “forever” when they met.

Robbie said: “I felt as though I’ve known this person forever, I’ve known her before, and there was something in the universe it was like a massive hand going ‘this one’.”

“And then I relented and then thank you universe.”

He continued: “I met Ayda two weeks before going to rehab and it still didn’t put her off!

“You are mental, you really rolled the dice there babe.”