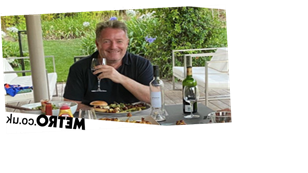 Piers Morgan has revealed he was robbed of over £10,000 when thieves burgled his French villa.

The Good Morning Britain host was holidaying with wife Celia in Ramatuelle on the Côte d’Azur when the rented home they stayed in was burgled while they slept.

And Piers believes that he was followed from the celebrity hotspot Club 55 by a drone, after the thieves saw his expensive watch.

Calling the burglary ‘very orchestrated and very unnerving’, the 55-year-old explained that they realised they had been robbed when Celia found her handbag upturned in the living room, after leaving it in the bedroom.

He told The Sun: ‘She looked in the bag and a lot of stuff had been taken. They found my briefcase which happened to have a lot of money in it which I hadn’t spent because everywhere you can use cards.

‘They took more than ten grand — that was in euros and Pounds and some dollars. So once they got a bundle of cash, they took that and jewellery, and didn’t take anything else.

The journalist added that the thieves had taken ‘irreplaceable bits of jewellery which weren’t hugely expensive but they were of huge sentimental value’, including an art deco ring he had bought for his wife for their fifth anniversary.

The burglary was even more unnerving as Piers had taken steps to obscure where he was actually holidaying.

He had tagged his Instagram pictures’ location as St Tropez, despite being in Ramatuelle, about five miles away.

While on holiday, Piers and Celia spent time with their kids Spencer, Bertie and Elise, as well as enjoying a number of dinners with Dame Joan Collins and an al fresco meal with Britain’s Got Talent judge Amanda Holden.

However, he also suffered a tendon tear in his ankle on day two of the six-week holiday, and was forced to hobble around on crutches.

Now, though, Piers is back in the UK and on our screens, as he returned to Good Morning Britain following a summer break.

The star is also taking over the night on ITV too, with his chat show Life Stories returning over the weekend with an emotional interview with Vinnie Jones.