Jessica Mulroney and Meghan Markle have been friends for several years. Jessica, who works as a stylist, got to work with Markle on “Suits,” – she helped pick out the wedding dress that Meghan’s character, Rachel Zane, wore on Meghan’s last episode of the show, according to Us Weekly. Over the years, the women have built a strong friendship, doing all the things that best girl friends do, from going on vacation together, to collaborating on outfits, and even supporting each other’s significant others; back in 2017, Mulroney attended the Invictus Games — that Prince Harry founded — with Meghan, according to Vanity Fair.

Jessica has been on-hand for some of the biggest moments in Meghan’s life. Not only was she a guest at Meghan’s 2018 wedding, but the Duchess of Sussex actually asked Jessica’s daughter, Ivy, to be a bridesmaid in the wedding, according to Town & Country. Of course, she accepted! Flash forward to July 2021, and Jessica has shared some new details about the dress that she wore to Meghan and Harry’s wedding reception. And something she shared is actually quite shocking! Keep reading to find out what Jessica just revealed. 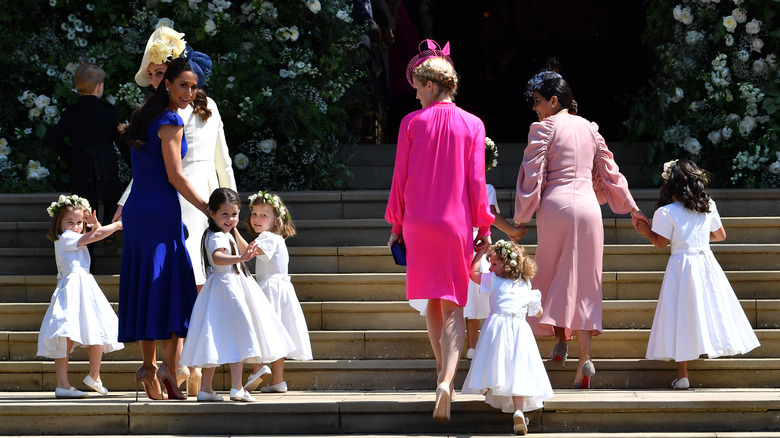 While Jessica Mulroney wore a royal blue, tea-length dress — with a matching fascinator — for Prince Harry and Meghan Markle’s wedding ceremony at St. George’s Chapel back in 2018, the stylist later changed into something a little more fancy for the after party, according to Hello! magazine. She opted for a gold dress that was covered in beading and featured a scoop back — and it has evidently been talked about for years. So much so, in fact, that Jessica decided to share the dress’ designer — and its weight with her Instagram followers! “So many of you asked about the designer of this dress. [Naeem Khan] and it weighed 30 pounds,” she wrote on a clip featured on her Instagram Stories. Khan is based out of New York City, and his styles have been worn by Jennifer Lopez, Michelle Obama, and even Kate Middleton, according to his website.

It’s unclear why Mulroney decided to share the details of her wedding party dress three years after the royal wedding took place, but evidently fans were curious about it. Jessica didn’t say anything else about the gown, nor did she mention Meghan or Harry in the post.