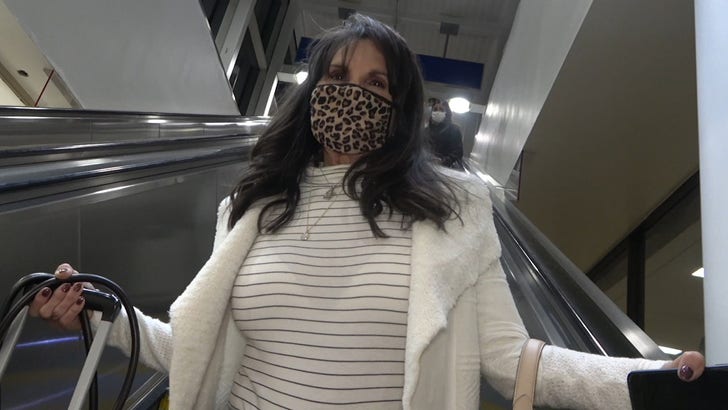 Britney Spears may be cozying up by the fire with none other than her mom, Lynne — that is, if things go mama bear’s way … and it’s clear she wants to reconcile.

Lynne ran into some paps at LAX, and they asked all about her daughter and the fact she’s now out of the 13-year conservatorship — one her mom had an integral part in orchestrating all those years ago.

As you see … LS wasn’t in too much of a chatty mood, staying mum on actual words. But, she did say a lot with her body language — including an apparent desire to reunite for the holidays.

Sources with direct knowledge tell TMZ … Lynne is in L.A. to spend Thanksgiving with her son, Brian. We’re told she’d like to see Britney but there are no plans … at least so far.  We’re told Brian still has a relationship with Britney, so he could talk to her about joining for Thanksgiving dinner. We’re told, “The guest list has not been set,” so stay tuned.

It also sounds like Lynne is happy Brit is out of the legal apparatus — even though her kid is still furious with her … going so far as to call for the jailing of her parents, whom she considers responsible for keeping her trapped for so long.

In any case, Lynne is obviously looking to bury the hatchet — again, based on her few gestures here.

Watch what she does when asked if she’s got a message for the Spears family at large … you could say she’s keeping everyone in her prayers, that or she’s pleading with them. Could be one or the other, really.