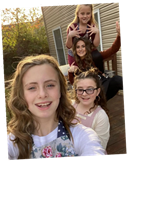 It’s been an eventful year for Leah Messer.

Beginning with the publication of her memoir in 2020, Leah gained a whole new fan base made up largely of folks who admire her strength in overcoming a difficult past, as well as her candor in telling the world about it.

Of course, all that adoration comes with increased scrutiny.

And these days, Leah finds herself the subject of more social media rumors than ever before.

Currently, fans are convinced that Leah is pregnant with her fourth child.

As far as we can tell, evidence of this claim is non-existent, but that hasn’t stopped the rumor mill from churning.

Media outlets have even picked up the report and ran with it, leading many to conclude that Messer really is expecting.

So is she actually pregnant?

And if so, why is she hiding such joyous news from her fans?

After examining the clues (i.e., Leah’s latest Instagram posts), we’ve arrived at the conclusion that — we don’t know.

And for that matter, neither does anyone else, except for Leah.

Obviously, that inconveniently boring fact won’t shut down the speculation.

But if one person who might have otherwise ruined Leah’s day by commenting that she’s “glowing” is deterred by our tireless reportage, then our work here is done.

Messer pays homage to the “A-team” (so named because all of her daughters’ names start with the letter “A”) just about every chance she gets.

(Also, that’s such a cute name for them, OMG)

“I don’t know where I’d be without them,” Messer recently told Us Weekly.

“Listen, if I were to ever get remarried, and let’s say they didn’t have kids and would want a child,” she said.

Leah added: “it would have to come with terms and conditions this time because I put my work in!”

“I don’t know,” Leah admitted. “Whatever’s meant to be will happen.”

Needless to say, that doesn’t sound like a woman who’s in a desperate hurry to welcome another child.

That is not an unreasonable way to feel, as many parents can attest.

Sometimes, the kids you have are enough.

As for who the father might be if Leah were currently pregnant — and again, it doesn’t appear that she is.

Fans are in almost universal agreement that Jeremy Calvert is the most likely candidate.

But fan agreement does not make it so.

Despite reports to the contrary, Leah and Jeremy are not back together.

However, it seems that they’ve been enjoying an on-and-off “friends with benefits” situation for quite some time.

So it’s not out of the question that they could’ve created another child together.

Leah rarely talks about her relationship with Jeremy.

However, she mentioned it during her recent Us interview.

“I definitely get this all of the time,” she admitted.

“Jeremy and I are in different places in our lives,” Messer said at the time.

That does not stop them from actively co-parenting, however.

“We do our absolute best to be the role models that Adalynn deserves,” Messer noted.

She added: “And I don’t see that evolving into anything beyond Adalynn Calvert’s parents.”

That sounds like a very stable situation for everyone involved.

Again, it sounds like Leah is happy with just about every aspect of her life, including her situation with Jeremy.

She doesn’t want to rock the boat, and neither do we.

So instead of spreading more rumors about her, maybe we should just let her enjoy the happiness she’s worked so hard for, mmm-kay?