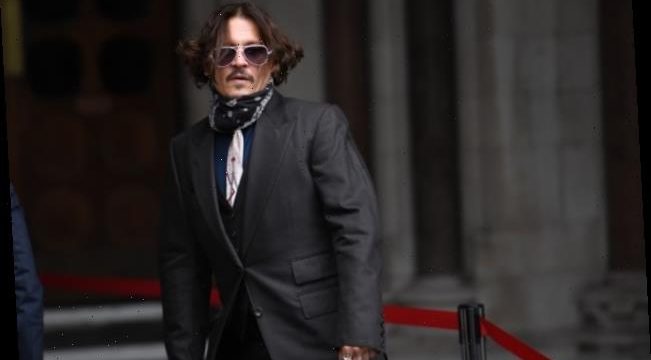 The actor received a stunning blow in court this week when a judge ruled against him in his $50 million lawsuit against the Sun.

Depp alleged that the paper committed libel when it referred to him as a wife beater in an article about his marriage to actress Amber Heard.

The trial quickly became one of the most infamous in modern Hollywood history, with stunning tabloid fodder emerging during every day of testimony.

Depp and Heard both took the stand and offered up recollections (sometimes with photographic evidence) of the other’s depravity.

Depp admitted to drug and alcohol addictions, but denied that his substance abuse led him to assault Heard.

In one of the trial’s most infamous chapters, Depp accused Heard of cheating on him with Elon Musk and defecating in his bed while heavily intoxicated.

Legal experts predicted that Depp would emerge victorious, as his team of attorneys offered convincing evidence that Heard has behaved abusively toward him, not the other way around.

The judge even weighed in on the infamous “poop in the bed” incident — which left Amber with the unfortunate nickname of “amber Turd.”

Depp’s lawyers alleged that Heard loosed her bowels on the bedspread as an act pof revenge after Johnny arrived late to her birthday party.

According to TMZ, Judge Nicole Hizzoner concluded that the more likely explanation is that Depp and Heard’s Yorkshire terrier ate some marijuana and deuced on the furniture in a state of confusion.

The pooch, who goes by the name of Boo, “had an incomplete mastery of her bowels after she had accidentally consumed some marijuana” the judge wrote in her decision.

It’s not an overstatement to say this case contained more bonkers twists than all of Depp’s collabs with Tim Burton, combined.

The decision is a major victory not only for the Sun, but for Heard, whose allegations against Depp are at least somewhat validated by the judge’s decision.

“The Sun has stood up and campaigned for the victims of domestic abuse for over 20 years,” the newspaper wrote in a statement.

“Domestic abuse victims must never be silenced and we thank the judge for his careful consideration and thank Amber Heard for her courage in giving evidence to the court.”

Heard’s legal tearm also issued a statement in which they refuted claims that the decision was widely unexpected.

“For those of us present for the London High Court trial, Filesthis decision and judgment are not a surprise,” the actress’ reps said.

Regardless of whether or not the outcome was a shocker, the trial itself contained too many jaw-dropping moments to count.

But now, like all of those involved, we’re very happy to see it come a close.