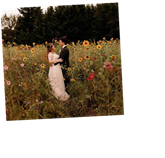 Isabel Roloff and Jacob Roloff may not be known for starring on Little People, Big World…

… considering they don’t star on this TLC reality show alongside the latter’s famous family members.

But these spouses are known for often speaking their minds, even when it comes to telling the truth about their own realtionship.

On Tuesday, Isabel celebrated the first year of her marriage to Jacob by admitting that it has been anything but an easy ride.

“It would be disingenuous to pretend like this year has been easy for us,” Isabel came right out and wrote to open the caption to the photo above.

Isabel went on to recognize that 2020 hasn’t been easy for anyone, adding:

“One of the most common phrases I heard from people before we got married was “the first year of marriage is the hardest”. I don’t know how true it is for everyone– but I guess it has been true for us.”

However, they’ve made quite a few headlines of late — mostly by disagreeing with Jacob’s loved ones.

In June, amid the social justice protests that broke out across the nation, Jacob ripped his family members for not recognizing their white privilege.

Just a few days ago, meanwhile, Jacob told people NOT to follow his brother, Jeremy, because he felt as though his sibling has been spreading dangerous conspiracy theories about the ongoing Oregon wildfires.

Isabel didn’t cite any of these controversies in her anniversary post, though.

“A lot of change, transitions, and growth has happened this year for our little family,” she explained on Instagram.

“Then add a global pandemic, the loss of family members, devastating wildfires in our home state.

“There’s been some stressful external factors as well, to say the least.”

Continued Isabel, who opened up about her mental health in July:

“No need to sugar coat it, there have been some rough seas; it hasn’t been all smooth sailing. But our love has only deepened from it all.

“I share this because it has become too easy to look at people’s lives online and compare yourself.

“What you don’t see here are the sometimes difficult conversations and challenging moments had between two people trying to figure things out, just like you are.”

It sounds right there as if Isabel and Jacob really have been struggling.

But there’s hope, she says.

There’s also a lesson all can learn.

Consider the way in which Isabel concluded her post:

So the next time you want to compare, remember that comparison is the thief of joy.

And remember that it’s so much more important to just love your people hard, exactly where they are, than have your life appear a certain way.

Focus on how your life feels to you rather than how it looks to anybody else.

Everyone has their own journey here, and in the end, “we’re all just walking each other home.”