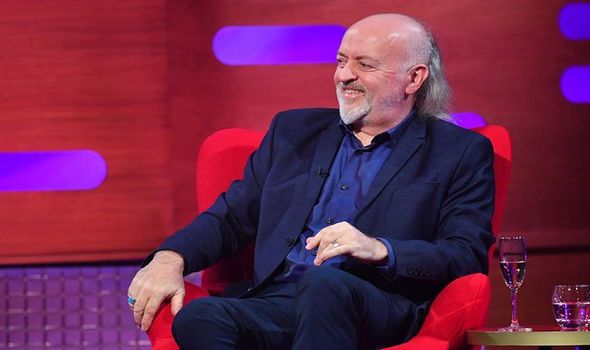 In disaster movies society breaks down very quickly. There is looting, murder, social unrest, even anarchy on the streets. Yet, as comedian Bill Bailey muses in his soft West Country accent, the exact opposite was true in the UK during the global Covid-19 pandemic. “People came together and looked out for each other,” he smiles.

One saving grace during this dark and depressing period, he believes, has been perhaps our greatest quality: common sense. Bailey, who captured the nation’s heart when he became the oldest winner of BBC One’s Strictly Come Dancing last December, says: “In times of great global crisis, actually people generally tend to be quite sensible.

“It’s interesting that during this pandemic, it’s people who have come together to make the best of it, while governments have made a hash of it and not been in tune with public opinion. I think the public have seen very, very clearly what’s going on, and they have reacted accordingly. People still wear masks, people still practise social distancing. There’s a kind of British utilitarianism at work here, a great British common sense.”

Indeed in some ways, he argues, the British public have shown more sense than the Government: “In those first few weeks of lockdown, there was a community spirit, which naturally flourished. People helped each other out and went shopping for each other.There was a lovely, village-y feel to it.”

Bailey, 56, talking to the Express exclusively from his home in west London ahead of his return to the stage on Monday for his Summer Larks show at the Royal Opera House in London, has been thinking a lot about Covid recently.

With an uncanny ability to bring the lightest of touches to the heaviest of issues, he feels comedy is the perfect forum to make sense of the tragedies and occasional triumphs of the pandemic. “Historically, comedy has always been a very good platform for addressing difficult issues. Think of Lenny Bruce and his discussion of curse words on stage,” he explains.

“Comedy has a very important role to play. It’s a safety valve. It’s a way for people to let off steam and to understand that they’re not alone, that other people feel these things, too.

“One of the great joys of comedy is when you go along to a gig and a perfect stranger on stage is describing a feeling that you’ve had before. It’s almost like a magic trick.”

He adds: “It’s very much like when you have a chat with a friend about a problem. The friend says, ‘I’ve felt that, too,’ and somehow it’s put into context and it doesn’t appear to be so insurmountable. In some ways, that’s what comedy is about, isn’t it?

“It’s about mirroring a shared experience. Sometimes a well-chosen phrase can actually cut to the heart of something which affects us all.”

Bailey is careful to steer clear of anything that might be deemed bad taste. “Obviously, I’m very aware that this is a terrible tragedy in which so many people have lost their lives. But the comedy is not belittling the actual pandemic.

“What we’re trying to get at is the absurdity and the strange situations that we have found ourselves in. We’ve had to learn how to deal with Zoom calls and find new ways to work. So

I think there’s a need for a bit of levity about that without undermining the sense that we’ve gone through some moment of history.”

He continues: “We’re living with this now and we will be for years to come. So I think dealing with it as we’ve gone along and relaying our own experiences of it is key. Because that’s something that people can really relate to.

“Covid affects every aspect of our lives. So it would be strange for me not to talk about the pandemic and the chaotic place we are in. We’ve talked about nothing else

Bill since even before we were first locked down. The pandemic has now become the normal way that British people greet each other.We go, ‘Hello. Have you heard about the Delta variant? Did you know the Kent variant has been coming up over the South Downs? And then of course, there’s the Bristol variant that’s working its way up the M4.'”

The other topic Bailey feels compelled to address in his new show is the confused official response. He explains: “The messages coming from the Government are so mixed and so garbled, sometimes to the point that it’s almost impossible to elucidate what they’re actually saying.”

Bailey, who lives with his wife Kristin, a former costume designer who now handles his business affairs, and their teenage son, Dax, continues: “There was that crazy time when it appeared to be official policy that you could have a sexual assignation with someone as long as it was outdoors.

“They were saying, ‘You can have sex with someone on a golf course in Wales, but only if you have bought them a Scotch egg first.'” The comic, who, you’ll be delighted to hear, is just as funny and charming in person as he is on stage, feels the official advice has become increasingly bewildering. Few of us would disagree.

“Now we are pretty much on our own. The Government is saying, ‘Right, well, we’ve done our best. Sorry, everyone, it’s on you now. Wear a mask, don’t wear a mask. Have a Scotch egg, don’t have a Scotch egg. Whatever.’ ” The crisis has had many different strands and affected people in all sorts of ways, if not directly through illness than as collateral damage.

“My own son had to go through the GCSE debacle last summer,” sighs Bailey. “I really felt for him because he had been working for years for those exams. Then to be told, ‘Oh, well, they’re not happening now.We’re going with this algorithm.’ And then a week later, ‘Oh, no, sorry, we’re not doing that now. We’re going with teacher assessments.’ It completely wrecked so many people’s lives.”

But it was another notorious episode, he says, that most fractured trust between politicians and the people. “There was a spell cast over the country for a few weeks – until the Dominic Cummings Barnard Castle incident happened, and that broke the spell.

“That was quite a crucial moment in this entire 18 months. People went, ‘Come on. We are really making sacrifices here. We’re doing the right thing. We’re not seeing our families.We’re wearing masks.We’re staying at home. We’re adhering to all these rules when our so-called betters are not. Are we mugs?’ ” It offended the innate British sense of fair play.

Bailey emphasises: “There’s one thing which is common in the British public, and that is a sense of fairness. The Dominic Cummings incident completely cut against that. It was genuinely unfair, and it really rankled with us.”

Bailey can’t wait to get back to performing in front of a live audience again. He believes communal experience is one of the things we have been missing most during lockdown.

“The pandemic has given us a reminder that we are a social species. We crave human contact, we crave a shared experience.

“One of the moments that I found deeply moving was when my stand-up show Limboland was broadcast on the iPlayer this spring. Honestly, I was almost moved to tears by people’s comments about it. They said things like, ‘Everything has been so bad this last year, I’d almost forgotten that I could laugh.’

“I thought, ‘God, you know, that is the very reason we comics do this’.” It’s particularly exciting for him to be going back on stage in the glorious setting of the Royal Opera House.

“It will be black tie formal wear, and ladies will have to carry a fan,” Bailey jokes. “‘Wow – I remember seeing him at the Leather Bottle in Merton, where you got a pie and a pint for four quid. And now look at him. You’ve changed, Bailey!’ ” The comedian, who will be embarking on a new tour titled En Route To Normal this winter, laughs that, post-Strictly, he may have to incorporate dancing into his show.

“I might have to rework the whole show as a contemporary dance spectacular – ‘he’s trying to interpret the Black Death through the medium of the foxtrot. Wow!'”

Bailey, who hails from Keynsham in Somerset, where his father was a doctor, has also been busy writing a book about the British.

“It’s recalling some of the encounters I’ve had with people from every corner of Britain.” Offering an example from his own life, he continues: “My father is a master of understatement. I say to him, ‘How are you, Dad?’ ‘You know, just going along quietly.’ That’s his default answer – ‘You know, just going along quietly.’ I love that. It’s such a beautiful British way of describing having to deal with everything that life throws at you. You have just got to keep going.”

The comedian, whose Strictly routine to Rapper’s Delight with dance partner Oti Mabuse was a massive hit, adds: “I’ll also be writing about the resilience of people in the wilder, more remote parts of Britain and the unexpected delights that you find in these isles, which are so incredible and beautiful and varied.”

He is also writing a musical. Might he decide to close it with a spontaneous dance to Rapper’s Delight? “Absolutely! The audience would be thinking, ‘How is this song connected to a musical about Flemish wool makers in the 17th century? I just can’t see the link.’

“Look, here come Peter and Maria from the Flemish woollen mills, and they’re telling people, ‘Put down your looms, everybody, and let’s have some fun. Let’s dance to Rapper’s Delight!’ ” I, for one, would pay very good money to see that.

Bill Bailey’s Summer Larks opens at the Royal Opera House on Monday until August 8. He will be performing in Cabaret All Stars at London’s Proud Embankment throughout August and September. Tickets for his En Route To Normal UK tour are on sale now.