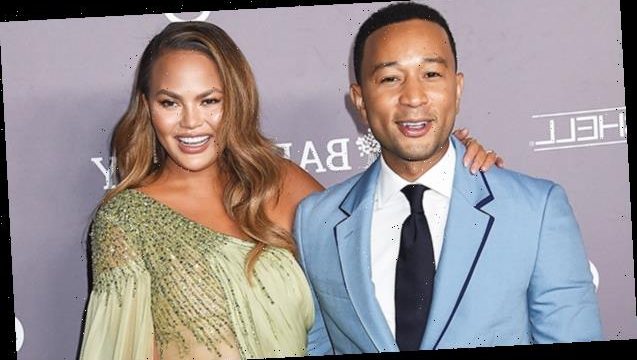 Family of 5! Chrissy Teigen and John Legend are expecting their 3rd child together, the couple revealed on August 13! The model subtly debuted her baby bump while in John’s arms in the new music video for his song, ‘Wild’!

Surprise — Chrissy Teigen is pregnant with her and John Legend‘s third child! Multiple sources close to the couple confirmed the joyous news to HollywoodLife on Thursday, August 13. The model, 34, and Oscar winner, 41, first subtly revealed that they have another one on the way in the release of his “Wild” music video. Chrissy, who costars in the romantic visual, can be seen holding her baby bump in a white dress at the 3:20 mark. John is standing behind his ladylove with his arms around her. The baby bump reveal came just before the couple’s two children, daughter Luna Simone Stephens, 4, and son Miles Theodore Stephens, 2, made cute cameos.

Ahead of the video’s release, Chrissy and John did a live Q&A on YouTube, but remained hush hush about her pregnancy. Once the video dropped, Twitter users began asking the couple if they were expecting. — And, in true Chrissy fashion, she tweeted a simple blushing emoji with hearts. The couple eventually released a statement, via Chrissy’s Instagram, confirming the pregnancy.

In April 2018 — just one month before Chrissy gave birth to the couple’s son — she spoke publicly about using in-vitro fertilization. “You know, we did IVF and it’s kind of crazy because even though you do all this planning and preparation, you take progesterone and inject your body and do all this stuff—and when I finally did get pregnant I was like, ‘Oh crap, are we ready?’” she said during an interview with The Cut. “I think it kind of doesn’t matter whether you do all that preparation or whether it’s a surprise. You still wonder if you’re ready. But then you hear from enough people that you’re never really ready, and you just go for it.”

Despite any struggles, Chrissy and John have never been shy about wanting more kids. “I think I’ll probably be pregnant all through my 30s,” she told Self magazine in 2016, right before Luna was born. “I’ve always pictured everyone around the table for the holidays and together once a week. It’ll be heartbreaking if it doesn’t end up happening, but hopefully it will,” she explained, adding, “We’ve got some embryos on hold.”

The couple’s pregnancy announcement came after the model recently revealed she underwent surgery to have her breast implants removed. “A few of my friends keep having to tell people that I really got my implants out because no one believes it,” she said in an Instagram Story video on July 19. Chrissy went on to show her scars on both of her breasts. She also shared graphic photo of herself in a hospital bed with various markings on her breasts.

It’s unclear when the surgery occurred, though Chrissy did confirm when she decided to commit to removing her implants. “A lot of people are understandably curious (and nosey!) so I’ll just say it here…I’m getting my boobs out!” she wrote in a post on Instagram on May 27, shortly after getting a COVID-19 test.

Congrats to the expectant parents! We can’t wait to see Chrissy’s pregnancy journey!