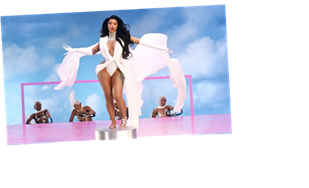 Following the massive success of her Megan Thee Stallion collaboration "WAP," which helped earn her the title of Billboard‘s 2020 Woman of The Year, Cardi B is now back with her latest single "Up." The star announced the track days before dropping it on Feb. 5 by releasing the single’s official cover art, which showed her hovering over a pool on a suspended hoop in front of a blue cityscape. It appeared as if she was wearing a sheer body suit, but the rapper revealed on Instagram her outfit was actually made up of body stickers. As if that wasn’t eye-catching enough, Cardi B’s "Up" lyrics will have you playing the song on repeat.

Even before its official release, fans knew "Up," which marks Cardi’s first single of 2021, was going to make a huge statement due to the previews she gave on IG. On Tuesday, Feb. 2, the rapper shared a behind-the-scenes video of her "Up" music video that showed her flaunting her gorgeous pink outfit, which was made up entirely of body decals. "This outfit was all sticker[s]," Cardi explained, before teasing, "You ready?"

Cardi didn’t have to say it twice because fans wrote things like "I’m finna cry yesss miss cardi 😫😫 Friday hurry up" and "Can’t wait for this bangaa🔥." As it turns out, fans were right because Cardi’s "Up" is a total bop.

You can take a listen to "Up" below: