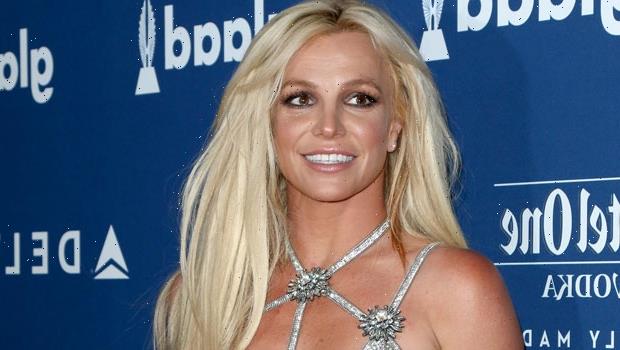 Britney Spears is feeling liberated — literally! A day after her dad Jamie was suspended as her conservator, the pop star took to Instagram with a series of sexy photos.

Britney Spears, 39, left little to the imagination in her latest photos! The mom-of-two rocked just her birthday suit as she struck a pose in what appeared to be an outdoor resort bathroom on Thursday, Sept. 30. Her blonde hair cascaded down her back as she gave the camera a fierce pose, using flower emojis to just cover up her private bits. In the next, she appeared topless as she walked away from the camera in just a cherry red bikini bottom — see the photos right here.

The “Lucky” singer didn’t credit a photographer, but the images are likely snapped by her handsome fiancé Sam Asghari, 28. In other photos, she continued posing up a storm in front of the outdoor bathtub, throwing her hair up in a bun — followed by more snaps of herself on the beach covering her breasts. “Playing in the Pacific never hurt anybody,” Britney captioned her latest post, adding a winky face emoji.

The pictures come just a day after her father Jamie Spears, 69, was suspended as her conservator by judge Brenda J. Penny. The move marks a big win for Britney, who has been advocating for the removal of her father and end of the 13 year conservatorship agreement altogether. Notably, the legal move does not mean her conservatorship is over yet — accountant John Zabel will now step into the role. Britney has filed papers requesting that the legal arrangement come to an end this fall which will be decided after a Nov. 12 court date.

“It’s a great day for justice,” Britney’s lawyer Mathew Rosengart said to the crowd who waited patiently outside the courtroom, made up of fans and media. “[Britney’s] very happy. We’re all very happy,” Rosengart — who was appointed to the case by Britney’s choice — also added.

Immediately after the news, Britney celebrated via another Instagram post where she revealed she was flying a plane for the first time ever! In a series of posts that included a short video, the Louisiana native could be seen. taking instruction from a pilot as she held a joystick in her hand.  “On cloud 9 right now,” she began, including a starry eyed, cloud and plane emoji. “First time flying a plane and first time in a prop plane!!! Geez I was scared!!!” she added.