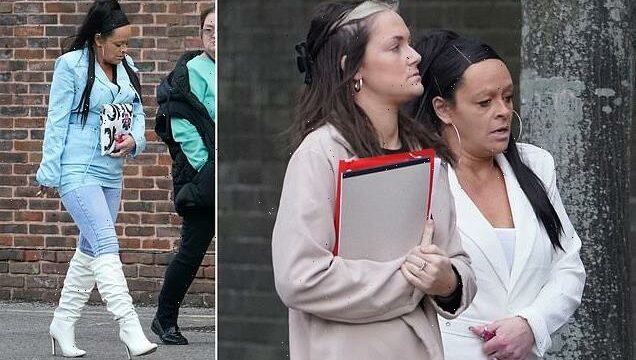 A woman whose large Doberman dog savaged a three-year-old girl leaving her traumatised was today jailed for 10 months.

Lisa Garner, 45, owned the ‘supremely powerful’ dog named El Chapo and was talking to the child’s grandmother when the Doberman attacked her in Havant, Hampshire.

The Doberman was an ex-guard dog and left the girl with life-changing injuries after it attacked her by seizing her torso in its jaws and throwing her to the ground.

Garner was jailed for 10 months and banned from owning dogs for 10 years at Portsmouth Crown Court today as it was heard that the girl has been traumatised and ‘screams in her sleep’. 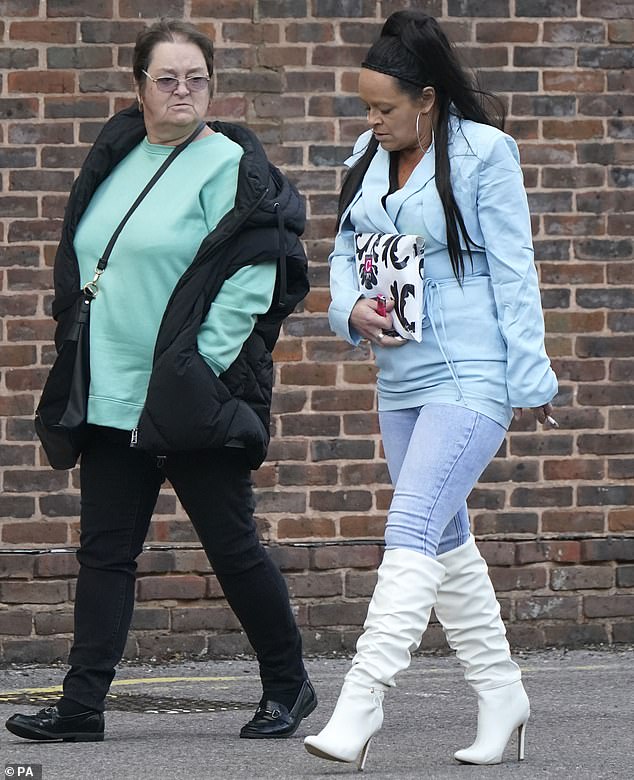 The incident happened in Botley Drive, Havant, Hampshire, on August 8.

Following the attack the three-year-old was rushed to Queen Alexandra hospital in nearby Portsmouth for treatment.

Garner pleaded guilty to charges of being the owner of a dog dangerously out of control causing injury.

She wept in court as Martyn Booth, prosecuting, told the court the girl’s grandmother, who knew Garner, had been to speaking to her about a complaint in a local Facebook group about El Chapo.

Referring to the Facebook post, Mr Booth said: ‘There were comments along the lines of the dog going for other dogs and cats.

‘Somewhat ironically [the girl’s] grandmother was to say to the defendant she had not personally had any knowledge of that.

‘I say ironically, because having gone from no knowledge of the behaviour of the defendant’s dog, the grandma of [the girl] had a very clear, up close and personal experience of what the dog was capable of.’

The court heard the dog had a ‘loose lead’ as it was being held by Garner, and the three-year-old stepped in front of the adults.

Mr Booth said she made ‘no particular sudden movements, she does nothing that in any way can sensibly be suggested as provocative or anything towards the dog – but the dog just went for her. 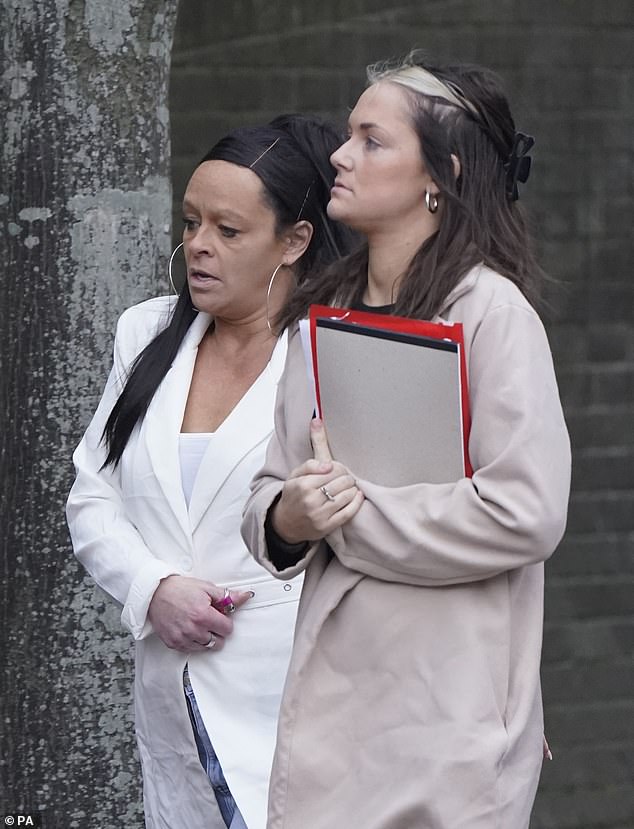 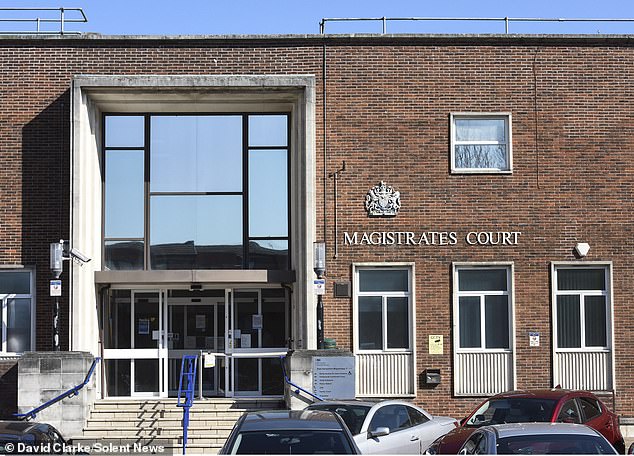 ‘The dog grabbed her around the torso area and basically threw her to the floor.

‘It was described as chucking her to the floor, it then wouldn’t let go, as it latched onto her around the stomach area.’

The court heard witnesses who saw the incident tried to help the family, with a combination of punching, pinching and kicking before it eventually let go.

The attack was described as ‘extremely traumatic, no doubt terrifying and painful experience for [the girl], a traumatic experience for those people who happened to see the incident and those who were brave enough to intervene.’

The Doberman has since been destroyed by police.

The court heard doctors treated the girl’s superficial wounds as well as ‘deeper’ ones measuring 1cm, 2cm, 4cm and 6cm.

The girl’s mother gave a statement of the impact it had had on her daughter, who screams in her sleep, saying: ‘The aftermath has affected her both mentally and physically.

‘She now screams in her sleep and wakes herself up screaming.

‘She can’t walk down the street, she won’t for next to or walk past a dog. She never had a fear of dogs before this.

‘It is heartbreaking for her and for her family to see her like this.’

The court heard the scarring on her daughter’s back and leg acts as a ‘daily reminder’ of the incident.

‘I don’t know if my little girl will ever get over this fear or the trauma she suffered that day,’ her mother added.

Defending, Damian Hayes, explained Garner had ‘rescued’ a number of Dobermans in the past 20 years.

‘This was clearly a horrific incident and the video evidence is harrowing,’ he said.

‘For her part Ms Garner feels nothing but shame and regret for what happened that afternoon.

‘Ms Garner takes the blame fairly and squarely on her own shoulders.’

Addressing Garner, Judge William Ashworth said: ‘There was never any intention for you to harm this very young girl.

‘I am concerned about your attitude following the incident, where you said “although the dog looks evil, it’s a big donut” – this speaks of your attitude.

‘It was a very powerful, very large dog that should have been at the very least muzzled in a harness and on a proper lead.

‘This dog presented a risk that a responsible owner would have realised.

‘It was a very serious incident and the dog represented a severe risk. 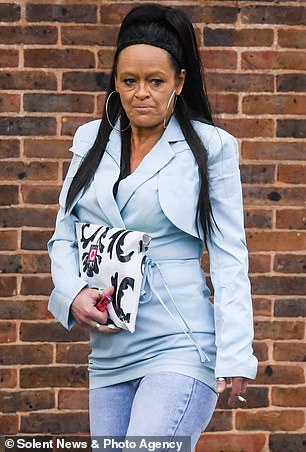 ‘Your lack of responsibility that you showed clearly resulted in the circumstances where a serious injury happened to such a young child.’

The judge also thanked the actions of the members of the public who helped intervene.

‘They showed considerable courage in the face of what must have been a terrifying dog,’ he added.

‘It is a reminder in a difficult and challenging world that members of the public can act with true courage and altruism and our court thanks them.’

Speaking at court today, the girl’s mother said her daughter had been close to losing her life.

‘My little girl could have lost her life,’ she said.

‘The dog was an inch away from her artery, which would’ve meant she’d have been gone there and then.’

The family, who attended court proceedings, said the young girl was so inspired by the care she received from doctors, that she wants to become one herself.

‘She wants to be a doctor now,’ her grandmother added

‘She put on my lanyard the other day and was saying “look, look nanny I’m a doctor.”

At the time of infamous cartel lord El Chapo’s arrest in 1993, his drugs cartel was the wealthiest and most powerful in Mexico, smuggling tonnes of cocaine into the United States.

The now 65-year-old, known as one of the most powerful drug traffickers in the world, was sentenced to life imprisonment for his crimes.