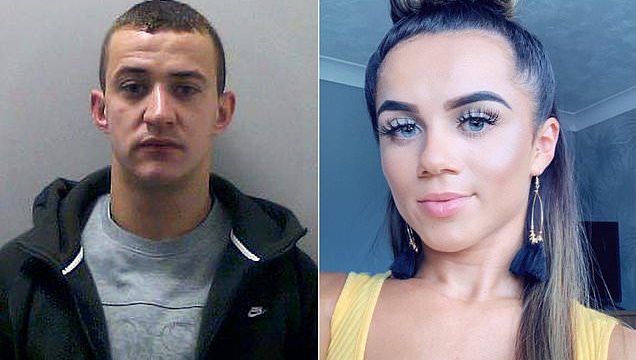 Judge tells ‘immature’ woman, 20, to choose her lovers more wisely after she tried to pay a couple hundreds of pounds if they deliberately failed to pick her knifeman boyfriend out of an ID parade 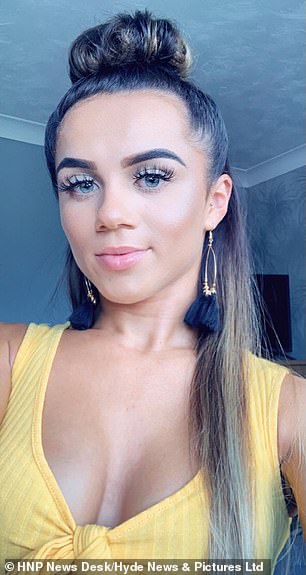 A judge told Micha McCafferty, 20, pictured, to choose her lovers more ‘wisely’ after her boyfriend was jailed for two and a half years and she was handed a suspended sentence

A judge told an ‘immature’ woman to choose her lovers more wisely after she tried to pay a couple to deliberately not pick her knife-wielding boyfriend in an ID parade.

Micha McCafferty, 20, tried to sabotage an investigation after her partner hurled a glass at a nightclub manager and threatened a couple with a meat cleaver.

Her boyfriend Thomas Britzman, 25, was jailed for two years and four months at Reading Crown Court in Berkshire.

However McCafferty avoided serving time for perverting the course of justice, and was handed a nine-month sentence, suspended for 18 months.

McCafferty sobbed as she watched Britzman, who had 12 convictions for offences including assaulting a police officer and causing grievous bodily harm, leave the dock.

She kissed Britzman after the sentencing and continued to tightly embrace her partner until he was led away.

Judge Heather Norton then gave the young woman, who was sitting on the floor, some advice.

She said: ‘Miss McCafferty, from the reports I have read, I am told you are an intelligent young lady. Intelligence includes choosing friends wisely, including lovers.’

Britzman was arrested on November 24 last year after he attacked Piero Pagliarol, the owner and manager of Paggies Wine Bar in Thatcham, Berkshire, with a glass, a wine bottle and a plank of wood. 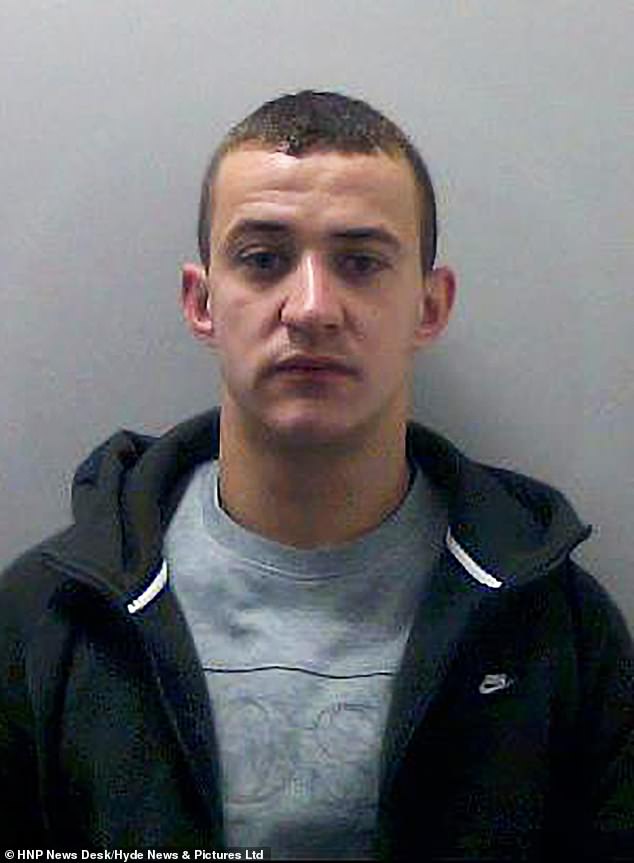 Thomas Britzman, 25, pictured, hurled a glass at a nightclub manager and threatened a couple with a meat cleaver last November. McCafferty offered to pay the couple to not ID Britzman

He was then seen to pick up an empty three-foot Co2 cannister, which he hurled across the bar’s smoking area, shattering glasses, before fleeing the scene.

Prosecutor Shaun Esprit said Britzman later approached a couple – Josh Rampton and Bethany Pease – who were sat in their car at 1am in the Thatcham Memorial Hall car park.

He then produced a meat cleaver, which he waved in front of Mr Rampton’s face before grabbing him around the throat and punching him in the eye.

The following afternoon, after Britzman had been arrested and his abandoned meat cleaver had been recovered by police, Ms Pease received a Facebook message out of the blue, the court heard, from McCafferty, who she had been at school with. 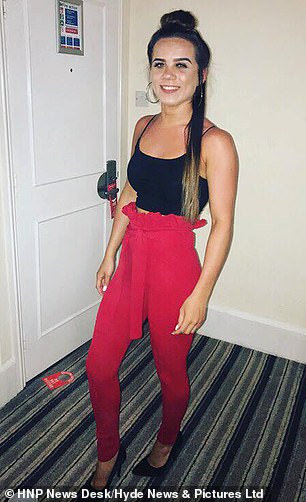 Reading Crown Court heard how McCafferty, pictured, had an NVQ in childcare and now worked in customer service

It said: ‘Hi, have you been in Thatcham recently? Give me a phone call and I can explain why. Nothing bad hun.’

Mr Esprit said: ‘She [McCafferty] went on to say they would pay both of them a couple of hundred pounds each in order to fail to make an identification at the impending police ID parade. The offer was refused.’

The defendant sent a further message saying: ‘Can we speak on the phone one more time? Please, it is for your sake too.’

Mr Rampton had contacted McCafferty, saying: ‘Please stop contacting Beth. She’s not interested and you’ll get yourself into trouble with police also by getting yourself involved.’

McCafferty and Britzman had both admitted their offences, the prosecutor added.

Defending for Britzman, John Upton said the defendant’s mother believed he had seven different personas and asked for an adjournment so a psychiatrist could assess Britzman for psychiatric problems.

Judge Norton said: ‘I do not find Mr Britzman’s mother’s email in any way persuasive. I entirely sympathise with the position she is in.

‘The reality is that there is not a scintilla of evidence to suggest that he has underlying mental health issues.’

The judge added that an expert, who had assessed Britzman before he was jailed for two years for GBH in 2017, had concluded the main cause of his offending was anger management problems. 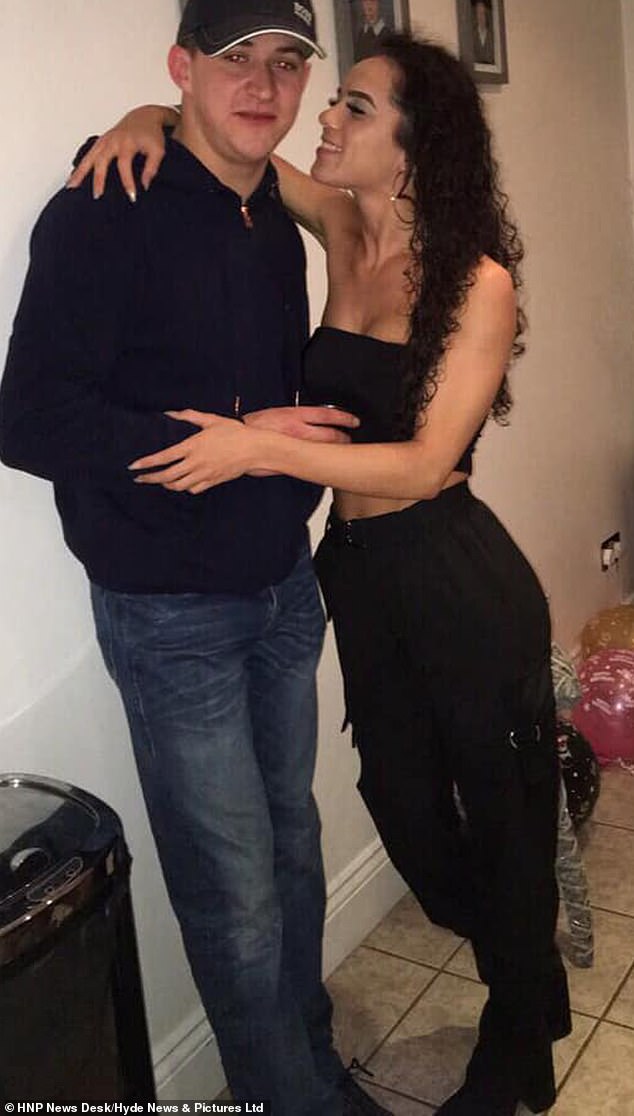 McCafferty sobbed after Britzman, pictured together, was told to leave the dock prompting Judge Norton to tell her: ‘Intelligence includes choosing friends wisely, including lovers’

Defending McCafferty, Steve Molloy said the young woman had been shocked when he had told her perverting the course of justice would almost certainly receive a custodial sentence and put her crime down to ‘immaturity’.

The lawyer told how McCafferty had obtained an NVQ in childcare and now worked in customer service at a telecommunications company where she had undertaken courses in being a fire marshal and first-aid training.

She was the primary bread winner in her home as both her parents were on extended sick leave, he said.

‘Appearing in court today, for someone with no previous convictions, is a real source of shame to her and her family because she is, in effect, from a respectable background. The fact that she loses her good name, she loses the prospect of ever working in childcare again.’

Judge Norton sentenced Britzman, of Newbury, to 28 months in prison for affray, two counts of assault and threatening with a blade.

The judge sentenced McCafferty, of Thatcham, to nine months in prison, suspended for 18 months and gave her 200 hours unpaid work and 15 rehabilitation activity requirement days.

However, the judge said her offence, perverting the course of justice, undermined the criminal justice system and merited a prison sentence.

Judge Norton said: ‘You were in a relationship with Mr Britzman and, no doubt, it was because of that and also because of what has been described as your immaturity and, frankly, stupidity, that you acted in the way that you did.’

In an online post addressed to Britzman after the sentencing hearing, McCafferty said: ‘Missing your little grin so bloody much my darling..been by your side the whole entire way and will carry on doing so. I’ll see you real soon sug..Lots of love your picha (or as you would say your co-d).’