In the same week the president of China was flattering Anthony Albanese, he was rebuking Justin Trudeau. Why the stark difference?

We know why Xi Jinping was praising the Australian prime minister in front of the TV cameras at the outset of their meeting at the G20 – “I attach great importance to your opinion”, he said. Because his policy of intimidation had backfired.

The dragon’s fiery blast – the ban on political contact, the trade sanctions, the insults, the reckless military challenges to Australian navy and air force craft, the 14 demands on Australian sovereignty – only hardened Australian resistance.

Canberra didn’t passively resist Beijing but actively armed against it. The Morrison Government’s decision to order long-range cruise missiles and to negotiate the AUKUS agreement are just two examples of a forceful response that was supported by both main political parties. But why was he rebuking Canada’s prime minister in front of the TV cameras at the same forum, a moment that was watched avidly on video worldwide?

Superficially, Xi was admonishing Canada’s prime minister for supposedly “leaking” details of an earlier conversation. But the substantive reason is that Xi is waging a policy of intimidation of Canada. It suited him to be rude to Trudeau.

Xi was “quite dismissive and threatening”, in the words of a former Canadian diplomat to China, Charles Burton, today a senior fellow with the Macdonald-Laurier Institute. 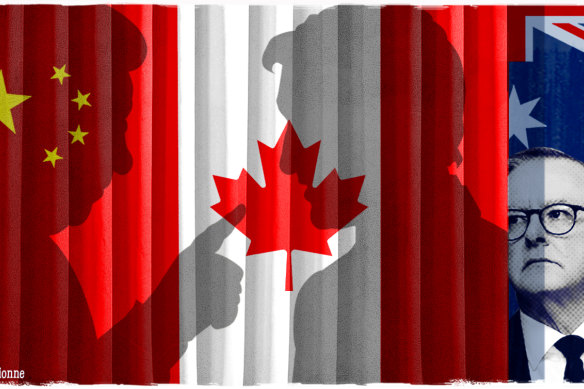 The threat? After telling Trudeau it was “not appropriate” for him to have leaked to the press, Xi added: “If there is sincerity, we can have conversations based on an attitude of mutual respect. If not, the results will be unpredictable.” This last phrase was also translated as “anything could happen”.

Xi’s complaint of supposed leaking was nonsense. It’s standard practice in many countries – including in China and the US – for officials to give reporters a rundown of leaders’ meetings after the fact, often on a “background” or non-attributable basis.

The reprimand was a calculated part of the campaign. Xi hadn’t even granted Trudeau a proper meeting at the G20. Denied a formal, bilateral meeting, their first conversation was merely an informal chat for maybe 10 minutes at the welcome reception, with both men standing. In fact, Albanese, standing nearby, briefly interrupted them to tell Xi he was looking forward to their upcoming sit-down meeting. It was that informal.

Trudeau did dare to complain to Xi about China’s covert interference in Canada’s last national election, according to the Canadian government. But only because he’d been embarrassed into it. Canadian broadcaster Global News broke the story this month that Chinese Communist Party operatives had run a clandestine interference campaign in the 2019 election. 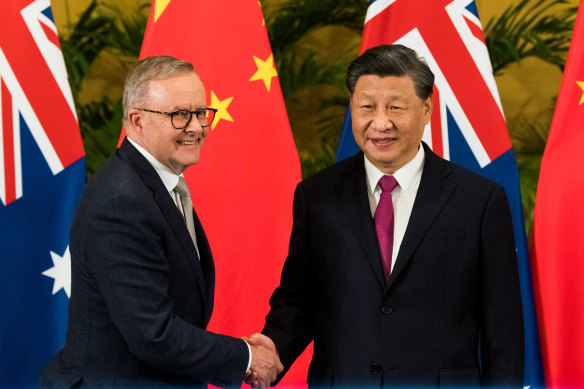 Anthony Albanese and Xi Jinping greet each other at the G20 summit in Bali.Credit:James Brickwood

The party’s operatives covertly supported 11 candidates, from both major parties, the report said. In one case, they sent C$250,000 or about $280,000 to a candidate’s campaign. How many won their seats? We don’t yet know.

The operation, reportedly run from China’s consulate in Toronto, also sought to place operatives within the offices of serving MPs in an attempt to influence policy, the report said. And they tried to “co-opt and corrupt” former Canadian officials to gain influence in the political system.

Once this had been exposed, Trudeau publicly denounced China’s “aggressive” foreign interference. The Global News report also said that the Canadian Secret Intelligence Service had briefed Trudeau on the Chinese operation in January but that he’d sat on the information. The prime minister denied any such knowledge.

Even if it’s true that Trudeau had no knowledge of this specific operation, this is no excuse. He’s been warned for years. “He has failed to protect our democracy,” charged the leader of the opposition, Pierre Poilievre.

The director general of intelligence assessments at the Canadian Security Intelligence Service, Adam Fisher, told a parliamentary committee this month: “Without a doubt China is the foremost aggressor” in the world in interfering with and “corrupting” other nations’ political systems.

He told MPs that China was “interested in working within the system to corrupt it, compromising officials, elected officials and individuals at all levels of government, within industry, within civil society, using our open and free society for their nefarious purposes.”

This is exactly what Beijing was doing in Australia. It was the reason that Malcolm Turnbull’s government legislated – with Labor’s full support, and to China’s great annoyance – the foreign interference and espionage laws of 2018.

And Trudeau’s government had done very little about it. “This has been going on in Canada for 20 years since the CSIS named Chinese United Front interference in a provincial election,” says the Lowy Institute’s China expert, Richard McGregor.

Canada is only now talking about adopting some of the Australian measures. Turnbull is mystified. “It’s curious that they haven’t been moving on it,” he tells me. “The important thing is to stand your ground. What’s the alternative? To roll over on foreign interference and espionage.”

That’s exactly what happened. The reason Xi is bullying Trudeau is because it’s been working. “Canada has been slow to turn, worried about being seen as confrontational,” says McGregor, “but that’s changing now.”

Canada this year became the last of the Five Eyes nations to ban Huawei from its 5G system, fully four years after the Turnbull government became the first to shut it out. Just this month, Ottawa ordered China to sell its stake in three Canadian critical minerals businesses.

To be fair, Trudeau appears to have stayed his hand partly because Beijing was holding two Canadians hostage in Chinese jails. Trudeau wouldn’t have wanted to jeopardise their release, which was orchestrated in a deal in September last year.

As it moves belatedly to protect itself against Chinese subversion, Canada can expect some more pressure tactics from Xi. It should take heart from the Australian example, says Turnbull: “If you are being bullied and coerced, you don’t win respect by buckling under. Stand your ground.”

Adds Lowy’s McGregor looking to Australia’s experience: “They can stand up for their sovereignty and survive, and, indeed, prosper.”

The Opinion newsletter is a weekly wrap of views that will challenge, champion and inform your own. Sign up here.

More from our award-winning columnists

An anxious nation: Mortgage stress, COVID burnout, extreme weather and the cost of living crisis – no wonder Australia’s status as the “lifestyle superpower of the world” is under threat – Nick Bryant

The future of democracy: Australia must learn from America’s descent into extreme inequality, which has led to deep discontent. It must also do more to civilise “social” media – the great amplifier of hate – Peter Hartcher

Behind the interview: Shane Warne may have been the greatest bowler legendary interviewer and cricket lover Michael Parkinson has ever seen, but he’s not his favourite interview – Peter FitzSimons