Jakarta: The World Health Organisation says Indonesia must do more to prepare for a possible outbreak of coronavirus, amid concerns the country of 270 million has not reported a single case of infection.

The organisation wants Indonesia to improve surveillance, case detection and preparations at designated health facilities "in the event of an outbreak scenario".

It comes as an Australian living in Bali, who has been diagnosed with pneumonia, criticised local health authorities' testing procedures and handling of his case. 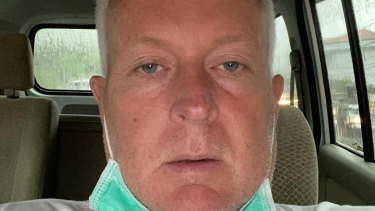 Australian Matthew Hale, who lives in Bali and who feared he may have contracted the novel coronavirus, has criticised the medical treatment he has received at a hospital on the island.

The WHO's Indonesia representative Dr Navaratnasamy Paranietharan, who is working closely with the Health Ministry, said the country had taken "concrete measures" including screening at international borders and preparing designated hospitals to handle potential cases.

"Indonesia is doing what is possible to be prepared for and defend against the novel coronavirus," he said, adding the ministry had begun to share more information with the public in recent days. 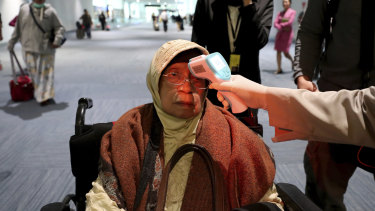 Temperature checks are used to monitor incoming passengers in Indonesia.Credit:AP

However, "there is still more work to do in the areas of surveillance and active case detection, and the preparation of designated health facilities fully with adequate infection prevention and control measures to be able to cope with a heavy patient load of any suspected or confirmed cases, in the event of an outbreak scenario."

"The availability of specific test kits to confirm nCoV [novel coronavirus] this week is a significant improvement in the right direction".

The Sydney Morning Herald and The Age last week revealed that Indonesia had not yet received the specific test kits needed to rapidly detect the new strain of coronavirus, which prompted a defensive response from the Health Ministry over its ability to detect the virus.

Instead, medical authorities have been relying on a pan-coronavirus test which can positively identify all viruses in the corona family (including the common cold, SARS and MERS) in a person. Gene sequencing is then needed to positively confirm cases of the novel coronavirus,a lso known as the Wuhan coronavirus, and the entire process can take up to five days.

Dr Paranietharan said "we [the WHO] are concerned" Indonesia had not reported a single confirmed case in the nation of nearly 270 million people.

But "we have been assured by relevant authorities that the lab testing has been working well," he added.

Health Ministry communications chief Widyawati said on Wednesday that 42 specimens had been sent to the department's laboratories for testing and "40 specimens are negative, two are still being examined".

Australian Matthew Hale told the Herald and Age that he had presented on January 26 at Denpasar's Sanglah hospital after he fell seriously ill following a trip to Singapore.

"The first hospital said they couldn’t help me and sent me to Sanglah. I got sent around all over the place [at Sanglah] and eventually found the right place, the doctor asked if I had been in China and I said no, so they said they couldn’t test for it," he said.

"At no point did she [the doctor] offer to do blood tests or take my temperature or anything."

Following his experience at Sanglah, he visited a third hospital, Prima Medika, which took a blood sample, checked his blood pressure, temperature and did x-rays and was "great".

"Within two hours she showed me the pneumonia on my chest and put me on strong antibiotics," he said.

Hale criticised the help available to foreign visitors to Bali. Australia and China are the top two sources of tourists to Bali, with about a million citizens from each nation visiting the island in 2019.

"There isn't anything in place, there isn’t even a helpline. So for foreigners who may have a problem, who do they ring? No one. All you can do is get on a plane and go home – but then you are making others on the plane vulnerable," he said.

Ketut Suarjaya, the head of Bali's health department, said health officials on the island took into account a person's travel history and their potential contact with a confirmed case of coronavirus. Seven blood samples from potential cases had been sent to Jakarta for testing thus far.

"So even without a travel history to China, if during the interview there is a history of contact, the person will be placed under observation," he said.

"Information [about coronavirus] is available on Bali's health department website and also at hospitals at the provincial and regency levels."

A ban on flights between China and Indonesia only entered into force on Wednesday, prompting concerns about the economic impact on Indonesia's economy.

Earlier this week, Indonesia airlifted 242 of its nationals from Wuhan, the epicentre of the virus, to the remote Natuna Islands where they will be quarantined for two weeks.

An Indonesian citizen living in Singapore was confirmed as having the virus on Wednesday.