Yesterday, chairman of the Education Select Committee Robert Halfon said that an investigation by LBC had exposed ‘pro-Putinist propaganda’ at some of the UK’s leading universities.

At Leeds University, a retired professor, Ray Bush is accused of spreading propaganda. Mr Halfon said Mr Bush made reference to the United States having ‘chemical warfare installations in Ukraine – that’s a lie, as he knows, being spread by the Kremlin’.

And he said that at Edinburgh University, Professor Tim Hayward retweeted a Russian representative to the United Nations describing the attack on Mariupol’s maternity hospital as ‘fake news’ and added: ‘As long as we’re still able to hear two sides of the story we should continue striving to do so.’

Speaking in the House of Commons, Mr Halfon asked if the Government would take action to stop universities acting as ‘useful idiots’ for the Kremlin.

Mr Zahawi said Higher and Further Education Minister Michelle Donelan was ‘already on the case’ and in contact with the universities. 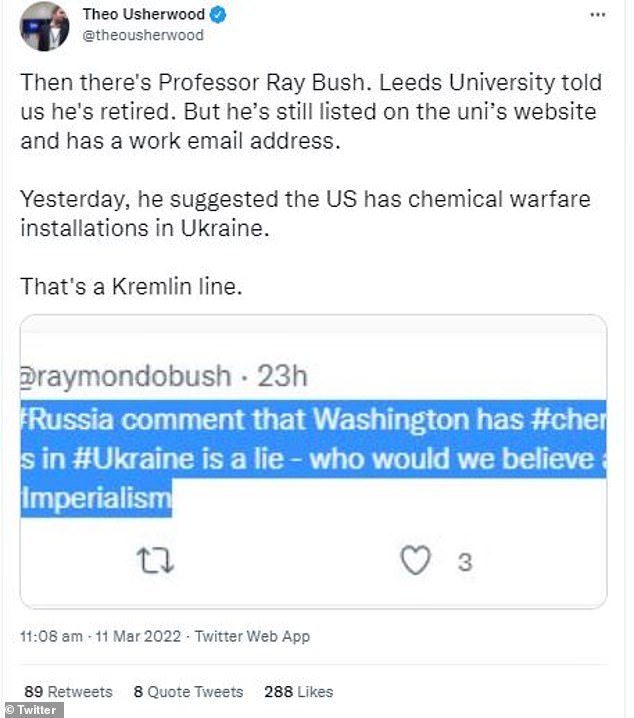 ‘Putin and his cronies are a malign influence on anyone in this country buying their false narrative, and I have to repeat it is a false and dangerous narrative, and we will crack down on it hard,’ he added.

University academics meanwhile have raised concerns that they are being ‘smeared’ as ‘pro-Putinist’.

Prof Hayward said that he was tweeting in a personal capacity and that he did not ‘retweet but quote-tweeted’.

He said he did not endorse the ‘categorical fake news allegation’ and that he quote-tweeted many people who he disagreed with.

‘I recognise propaganda can abound on all sides. I am not pro-Russia and emphatically not pro-Putin,’ he said. 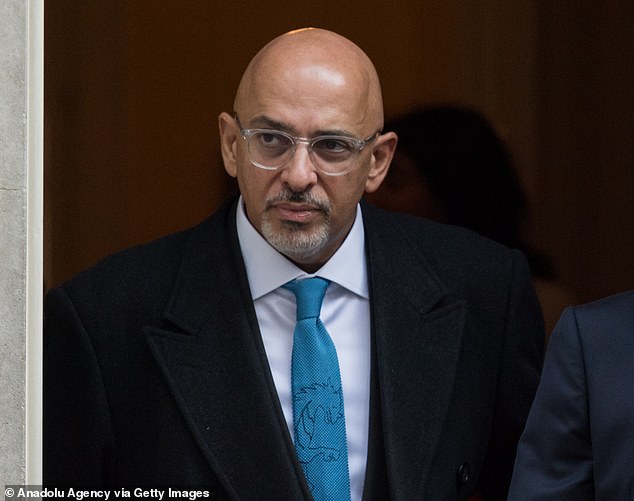 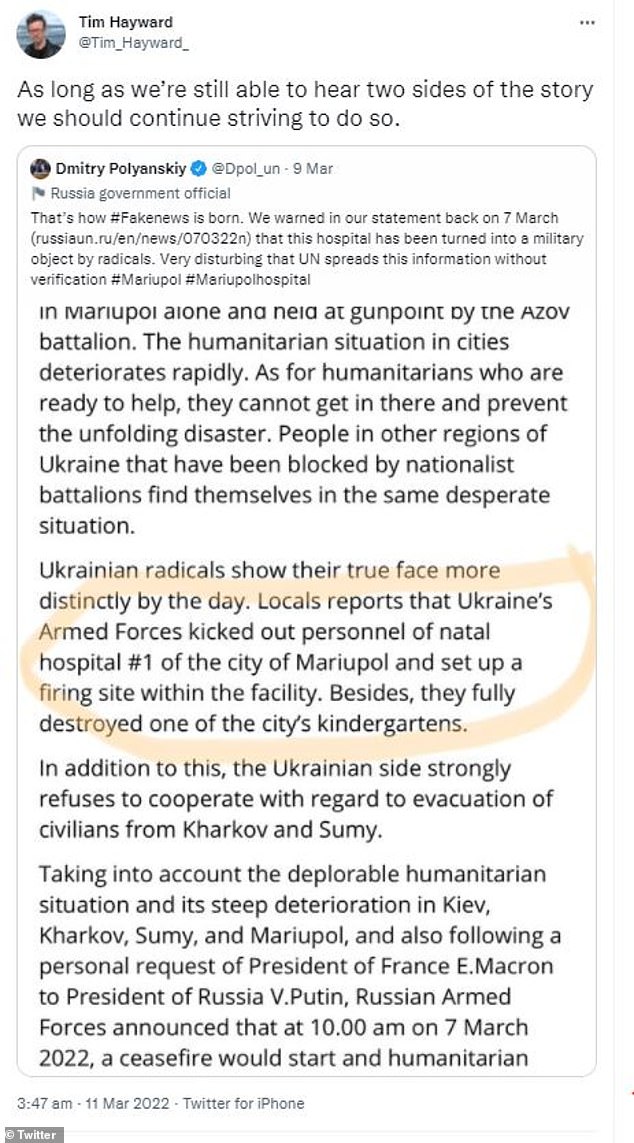 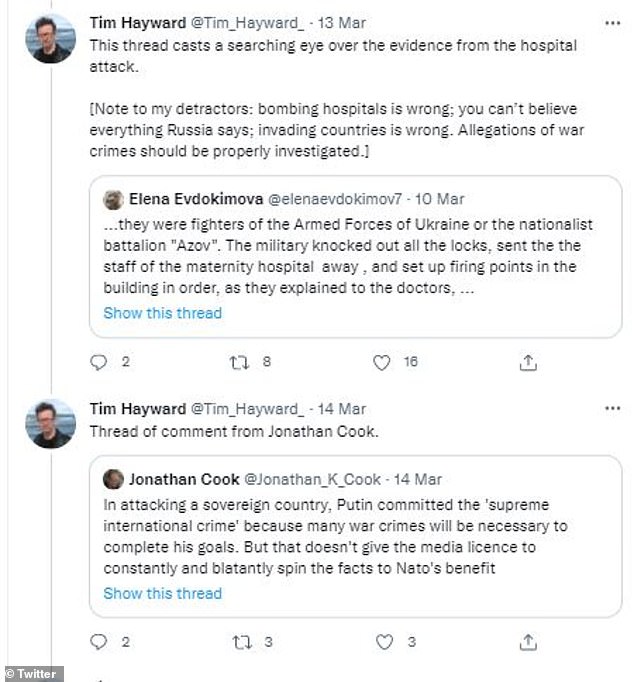 In one of his tweets, Professor Tim Hayward said he was casting ‘a critical eye’ over evidence of a hospital attack in Ukraine

‘For all that, though, having learned lessons from Iraq WMD [weapons of mass destruction] lies and others since, I believe that citizens should keep a watchful eye on information that can be used to escalate tensions and war. I have not repeated any narrative,’ he added.

‘We do not comment on individual members of our staff,’ the spokesperson added.

‘The University of Leeds condemns in the strongest possible terms the abhorrent wave of violence unleashed by the Russian government through its invasion of Ukraine. We made this clear to our entire university community in a statement issued last week.’ 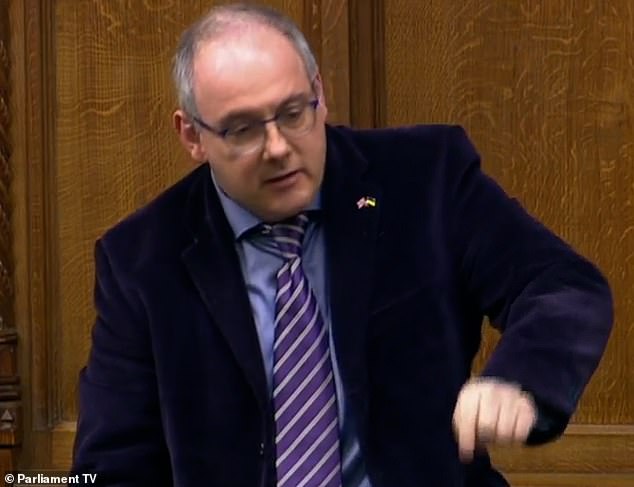 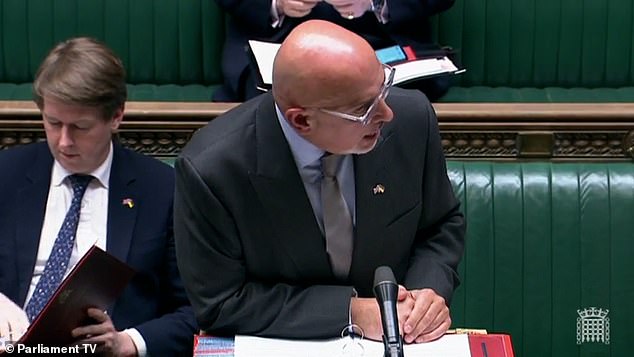 President and vice-chancellor of Leicester University Nishan Canagarajah said: ‘Our university community has, like many, watched with horror as the Russian government’s unprovoked invasion of Ukraine has escalated over the last few weeks.’

‘This action is profoundly disturbing and I speak on behalf of the entire university in condemning the Kremlin’s actions and offering our unequivocal support for the people of Ukraine and our peers at Ukrainian universities.

‘We are taking active steps to support our staff, students and peers who’ve been affected by the situation and we will continue to follow advice from the UK Government to find further ways to help those in need during this terrible conflict.’

Mr Zahawi told the Commons that Ukrainian university students would be able to extend their leave to remain in the UK or switch over to graduate visas.

‘We’re working across Government to support Ukrainian students in the UK by introducing a new humanitarian route,’ he said.

Mr Zahawi added that Ukrainian refugee pupils would be supported in starting school in the UK.

Here’s how YOU can help: Donate here to the Mail Force Ukraine Appeal

Readers of Mail Newspapers and MailOnline have always shown immense generosity at times of crisis.

Calling upon that human spirit, we are supporting a huge push to raise money for refugees from Ukraine.

For, surely, no one can fail to be moved by the heartbreaking images and stories of families – mostly women, children, the infirm and elderly – fleeing from the bombs and guns.

As this tally of misery increases over the coming days and months, these innocent victims of this conflict will require accommodation, schools and medical support.

Donations to the Mail Force Ukraine Appeal will be used to help charities and aid organisations providing such essential services.

In the name of charity and compassion, we urge all our readers to give swiftly and generously.

TO MAKE A DONATION ONLINE

To add Gift Aid to a donation – even one already made – complete an online form found here: mymail.co.uk/ukraine

Via bank transfer, please use these details:

TO MAKE A DONATION VIA TEXT

TO MAKE A DONATION VIA PHONE

Call 0300 12345 77 and follow the instructions to make your donation. A small fee will be deducted by the payment processing platforms when you pay by debit or credit card.

TO MAKE A DONATION VIA CHEQUE

TO MAKE A DONATION FROM THE US

US readers can donate to the appeal via a bank transfer to Associated Newspapers or by sending checks to dailymail.com HQ at 51 Astor Place (9th floor), New York, NY 10003