Washington: The hundreds of far-left and anarchist demonstrators who gathered in protest mere hours after President Joe Biden swore the oath of office on Wednesday signal a fracturing on the left that could become a scourge for the new administration, political leaders and experts say.

Some activists are carrying their destructive tactics into a new administration to voice rejection of centrist ideologies they believe will do little to address existential worries over climate change, economic inequality, foreign wars and racism. The vandalising of the Oregon Democratic Party headquarters by extreme-left demonstrators on Inauguration Day has split Portland liberals, and federal agents’ launching of tear gas at crowds that descended on the city’s Immigration and Customs Enforcement headquarters produced scenes reminiscent of similar summer stand-offs ordered by President Donald Trump. 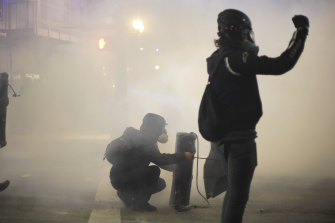 A group of protesters demonstrate outside the US Immigrations and Customs Enforcement building in Portland, Oregon.Credit:AP

In Seattle, a march organised by anarchists and the city’s Youth Liberation Front branch roved through neighbourhoods, chanting expletives at both Trump and Biden, some breaking windows at the original Starbucks. In Denver, dozens of demonstrators burned an American flag and yelled epithets at police.

James Ofsink, president of Portland Forward, a local advocacy group for liberal causes, said the growing tension in Portland’s progressive circles – and the elation with which right-wing pundits and politicians have watched far-left demonstrators destroy Democratic structures, sometimes literally – is emblematic of a larger tug of war happening in the nation.

“Portland is going to continue to be a microcosm of the political divides, especially among the left, that we’re seeing across the country,” Ofsink said. “The idea that middle-of-the-road Democrats can say with a straight face that we need to take things slowly or do things in a very deliberate way rubs a lot of people the very wrong way.” 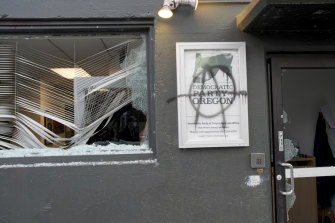 Protesters tag and smash windows at the Democratic Party of Oregon headquarters on Wednesday, January 20, in Portland. Credit:AP

Violent and destructive activity among far-left groups has been increasing nationwide, according to a recent study by the Transnational Threats Project at the Centre for Strategic and International Studies, a nonprofit policy research group. Though nearly 70 per cent of terrorist attacks and plots in the US last year were committed by white supremacists and far-right militia groups, according to the study, the portion led by anarchist and anti-fascist groups rose to 20 per cent from 8 per cent in 2019.

Seth Jones, the center’s director, said violent far-right events like the 2017 Unite the Right rally in Charlottesville – which resulted in the death of a counterprotester – have prompted many of the far-left groups to arm themselves and organise more events that have also become increasingly violent and destructive.

Though nearly 70% of terrorist attacks and plots in the US last year were committed by white supremacists and far-right militia groups, the portion led by anarchist and anti-fascist groups rose to 20% from 8% in 2019.

“There is additional danger coming down the road where we have this extremism almost feeding on each other, almost inspiring one another,” Jones said. “Based on recent trends, we can expect violent far-left networks to conduct explosive, incendiary and firearm attacks against police, government and corporate targets.”

Portland has been a hotbed of both extreme-right and extreme-left activity, a trend that Wednesday’s destruction suggests will continue. 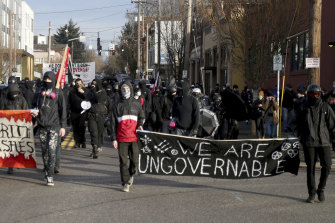 Demonstrators hold a sign saying “We are the ungovernable” during a protest march on Inauguration Day in Portland.Credit:The Oregonian via AP

More than 100 protesters in black bloc – all-black attire meant to anonymise the wearer in a crowd of similarly dressed people – had gathered on Wednesday at Revolution Hall, a music venue in the south-east part of the city, before a handful of demonstrators broke off to bash in the windows of the vacant Democratic headquarters while others shielded them from view with large, black umbrellas.

Hours later, another group protested outside Portland’s ICE headquarters – a demonstration that had been advertised on social media with the tagline, “What’s outrageous? Kids in cages!” – calling for the dissolution of the agency. Prosecutors allege protesters “threw large rocks” at federal officers, the demonstration ending in explosions and clouds of gas as federal agents unleashed a barrage of chemicals and sparking munitions that skidded across the pavement toward crowds of protesters.

Fourteen people were arrested during several Inauguration Day protests in the city. Prosecutors are pursuing charges against four individuals, the Multnomah County District Attorney’s Office said in an email Friday – all in their 20s and alleged to have participated in a riot. Prosecutors cautioned that number may not be final, as an investigation is ongoing and police are expected to file additional reports.

Mark Bray, author of Antifa: The Anti-Fascist’s Handbook, said the graffiti that the Portland protesters left behind and the flags some carried included anarchist symbols. There is a “fair amount of overlap” between the ideologies of anarchists and antifascists. Both tend to be anti-government, opposed to both the Democratic and Republican parties, and frequently protest on Inauguration Day and at the parties’ annual conventions.

“Broadly speaking they want directly democratic, self-managed communities at the regional and macro-regional levels,” said Bray, a historian and lecturer at Rutgers University who helped organise Occupy Wall Street. “They want decision-making from the bottom up versus the top down. They reject capitalism.”

Portland’s protests undercut claims by Republicans that far-left groups have embraced Biden and have committed destructive acts in support of his policies, said Oren Segal, vice-president of the Centre on Extremism at the Anti-Defamation League.

“There have been so many efforts to link Biden to the radical elements of the left, including antifa,” he said. “This demonstrates a disconnect between that messaging from the Trump administration and elected officials, who tended to lump together the left more broadly with these radical elements.”

Many on the left have criticised how such groups have demonstrated their ideologies, fearing it weakens their unity and message. Gregory McKelvey, a political consultant and vice-chair of the Democratic Party of Oregon’s Black Caucus, noted that some activists “who want to empathise with the extreme left finding it hard to do so right now”.

“I don’t think these tactics work. It alienates people, and growing the coalition is essential to creating change,” McKelvey said. “I also think Trump was abhorrent and Inauguration Day was a day of the country really getting to exhale and celebrate and to do so and feel as though someone is telling you there is no cause for celebration when clearly there is, it’s frustrating.“

But McKelvey, who has for years attended racial justice demonstrations in Portland, added that many in the city’s activist community also continue to lash out against police and the government as a result of months of trauma – being on the receiving end of crowd-control munitions, including tear gas, as well as the ongoing pandemic and economic anxiety.

McKelvey worries that the conversation that has followed Wednesday’s clashes has distracted from the key issues he and other community organisers hope that the Biden administration will address, including climate change and systemic racism.

“On the scale of everything that’s going on in the world, for anybody’s top priority to be ‘there were four broken windows or graffiti on the DPO building,’ it doesn’t compare to the fact that George Floyd was murdered and we still have a flawed criminal justice system in our country,” he said. “I might think broken windows is bad, but it’s not going to be my fight.”

Three of those arrested as a result of the destruction in Portland on Wednesday were accused of damaging the offices of the Democratic Party of Oregon. Austin Nuchraksa, 25, is accused of smashing a window at the party headquarters with a “silver metal baton,” according to court documents, after marching with a group that carried banners declaring “WE DON’T WANT BIDEN – WE WANT REVENGE” and “WE ARE UNGOVERNABLE.”

After Nuchraksa was detained by police, officers said they smelled gas and found four green beer bottles, wrapped in socks, with cloth wicks protruding from each bottle’s mouth, according to court records. The homemade molotov cocktails were “leaking gasoline all over the inside of the backpack,” prosecutors wrote. Nuchraksa was charged with participating in a riot, first-degree criminal mischief and unlawful possession of a destructive device.

Kai-Ave Douvia, 22, is accused of using a “pry-bar kind of tool” to break windows at the DPO building, according to court documents. He was charged with first-degree criminal mischief and participating in a riot.

Nicole Rose, 25, is accused of helping to break windows at the DPO by handing a “metal baton” to another demonstrator who then used the baton to break the glass, according to court documents. Rose later took the baton back and used it to “break the rest of the window,” prosecutors wrote. She was identified using live-streamed video of the event and charged with second-degree criminal mischief and participating in a riot.

Those arrested have been released on their own recognisance, according to Multnomah County Sheriff’s Office records. The Washington Post’s efforts to reach them Friday were unsuccessful.

Portland Mayor Ted Wheeler, a Democrat, has not publicly spoken about the protests and did not respond to a request for comment.

Several others were arrested for the vandalism at the ICE federal building. Trevor Colter, 26, allegedly threw a “projectile” at officers outside the building while officers attempted to disperse the crowd, according to the District Attorney’s office. Colter, who was charged with rioting, resisting arrest and second-degree disorderly conduct, was later found to be carrying a large knife, bear spray, a collapsible baton and three fireworks, according to court documents.

Protesters who participated in Wednesday’s demonstrations in Portland said the people who perpetrated destruction and committed acts of vandalism at the Democratic Party’s building were a small number of more than 100 protesters who had gathered for a march meant as a left-wing rebuke of the Biden presidency.

Later, outside the ICE headquarters, protesters chanted “not my president” and lit a Biden campaign flag on fire. Some spray-painted a message onto the federal building in a condemnation of Trump’s immigration policies that separated migrant children from their parents: “Reunite families now.“