Facebook has banned the sharing or viewing of our news articles on its platform. For independent journalism straight from the source, download our app and sign up to our newsletters.

Yangon: The chorus of banging pots and pans begins in Chinatown at about 8pm.

The district in Myanmar’s commercial city of Yangon is normally festooned with bright red lanterns to celebrate Chinese New Year. But when the Year of the Ox arrived in mid-February, the usual festive atmosphere was gone – replaced by a tension in the air. 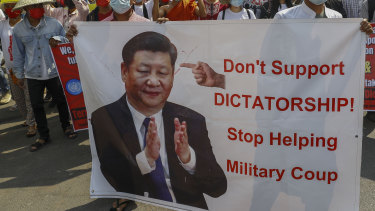 Demonstrators display a picture of Chinese president Xi Jinping, with a message requesting not to support military coup during a protest against the military coup in Mandalay, Myanmar.Credit:AP

Here, and across the country, swelling ranks of young ethnic Chinese protesters are joining mass rallies against the junta that abruptly deposed Aung San Suu Kyi’s government. Many are united by rumours that China is helping the regime install a repressive new internet system that will severely restrict online freedoms behind a “Great Firewall”.

Eager to show opposition to Beijing meddling, they gather outside the embassy, some displaying posters reading “Myanmar-born Chinese oppose the military coup”.

“They want to show all Myanmar people we stand together,” said Yang Chung-ching who was in the crowd at a recent demonstration. “It’s not just here, but everywhere. Ethnic Chinese are actively taking part in these protests.” 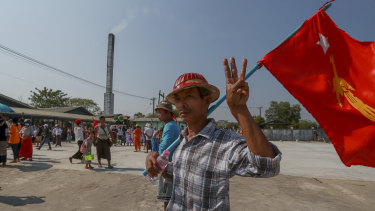 A man carrying a flag of the National League for Democracy party flashes the three-fingered salute during the funeral of Tin Htut Hein in Yangon, Myanmar on Wednesday.Credit:AP

Their fears were not allayed when China failed to condemn the coup at a meeting of the UN Security Council.

The Chinese government, which wants to avoid instability that will disrupt its own economic ambitions, has denied reports of political support or assistance to build Myanmar’s own version of their internet.

The timing is ominous, as Myanmar is drafting a new cyber security law. Even without the law the junta has experimented in recent weeks with intermittent internet blackouts designed to disrupt dissent. 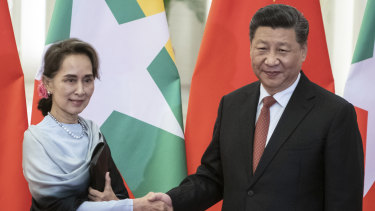 But the daily rallies outside the Chinese embassy in Yangon continue, with people carrying banners demanding that it “stop interfering with our affairs of state”.

At one recent demonstration Sai Aung Htun, a 24-year-old ethnic Chinese lawyer in Mandalay, expressed his concerns about the draft cyber security law.

“I am quite worried because if that law is adopted, we won’t be able to say what we want to say online. Every single day since the coup I have been worried if the progress Myanmar gained in the last ten years would be rolled back day by day.”

The history of the ethnic Chinese in Myanmar is complex. Much of the older generation remain scarred by the deadly anti-Chinese riots in 1967 that marked a dark chapter in Beijing’s complex relationship with Myanmar.

Dozens of Chinese were killed and their businesses looted by Myanmar’s Bamar majority when unrest was triggered by economic insecurity and fears that the minority was promoting China’s cultural revolution ideology.

Economic and ideological divides, as well as ethnic conflicts in border regions, have since fanned tensions with Myanmar’s 1.7 million-strong Chinese minority, which makes up about three per cent of the population.

Say Nay Nay Win, 22, has lived in Myanmar all his life. Like millions of ethnic Chinese born and raised there, his ancestors moved to the north of the country from neighbouring Yunnan province more than half a century ago.

But he said that has not stopped people from questioning his loyalties in the wake of the coup.

The suspicions have helped galvanise his own protest activities in the city of Lashio.

After seeing negative social media posts about his community, he revived his Burmese Chinese Youth Association, which has since helped organise mass rallies.

“People confuse anti-Chinese Communist Party feeling with anti-Chinese feeling. But because everyone can see ethnic Chinese standing up and protesting, they are slowly getting clearer,” he said.

An annual survey in early February by the ISEAS-Yushof Ishak Institute in Singapore revealed that 64 per cent of Myanmar respondents were worried about China’s economic influence and 47 per cent about its political clout.

He said that the coup was a new headache for Beijing, which had invested heavily in warming ties with the now overturned National League for Democracy government – a more predictable partner than the secretive ranks of the junta.