A worker in Melbourne’s CBD has been wheeled from a building on a stretcher with a bloodied face, after a truck’s concrete pump exploded.

The worker was among four people taken out of the LU Simon Builders’ building on Bourke Street and driven by ambulance to hospital about 9.30am on Thursday. 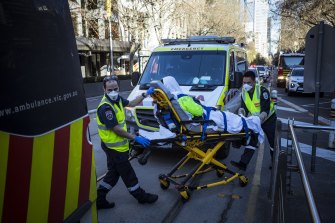 Four people were injured during a workplace accident on Bourke Street on Thursday morning,Credit:Chris Hopkins

Witness Harry Young said he didn’t think much of the blast until he saw emergency services arrive on scene.

“It was a bit noisy and then all of a sudden we heard this bang,” he told Nine News Melbourne.

“I heard this bang … didn’t think much of it, and then next thing you know there’s [a] fire engine, another fire engine, a police car, ambulance.”

A Fire Rescue Victoria spokeswoman said crews arrived at the scene, opposite Parliament House, after a witness reported that a truck’s concrete pump had exploded.

“Arriving on scene within five minutes, crews worked to assess multiple patients before transferring them to the care of Ambulance Victoria paramedics,” the spokeswoman said.

“Firefighters investigated the concrete truck for any further danger, and the incident was brought under control within seven minutes.”

One of the people taken from the building appeared to have a burnt face.

Ambulance Victoria said they received a call about the incident just after 8.50am on Thursday.

Our Breaking News Alert will notify you of significant breaking news when it happens. Get it here.