Draymond Green is no stranger to high-profile playoff bans.

He earned another on Sunday. For a half, at least.

The Golden State forward was ejected on Sunday on a controversial flagrant 2 foul. But the Warriors rallied in his absence for a thrilling 117-116 win to take a 1-0 lead over the Memphis Grizzlies in Game 1 of their Western Conference semifinal series.

The game came down to a final shot by Memphis guard Ja Morant, who's piled up a career's worth of highlights in his three-year NBA stint. But this one didn't fall for the Grizzlies guard, whose layup at the buzzer bounced off the backboard without touching the rim.

THE WARRIORS HANG ON TO TAKE GAME 1 ‼️ pic.twitter.com/8pCNdaRuSF

The Grizzlies earned the final possession thanks to a bizarre set of circumstances led to a jump ball in the game's final seconds. The Warriors had a chance to take a three-point lead with Klay Thompson at the free-throw line with 6.7 seconds remaining in the game. But the career 84.9% free-throw shooter missed both shots, and the ball bounced out of bounds after neither team was able to corral the rebound on his second miss.

Officials couldn't decide who touched the ball last and called for a jump ball at center court with 4.8 seconds remaining. Neither team had a challenge remaining, and NBA officials are no longer permitted to initiate a replay review on an out-of-bounds call in the game's final two minutes.

Big games from Ja Morant, JJJ not enough for Grizzlies

The Grizzlies won the jump ball and called timeout to call the final play that set up Morant for his layup attempt. Morant was spectacular before his final shot fell short, tallying 34 points, 10 assists, nine rebounds and three steals while keeping the Grizzlies close throughout the second half. Jaren Jackson Jr., meanwhile, had his best game of the postseason with 33 points and 10 rebounds while shooting 6 of 9 from 3-point distance. But it wasn't enough against a playoff-tested Warriors core that's been here before.

Stephen Curry, back in the starting lineup after spending most of the first round in a sixth-man role while coming back from injury, tallied 24 points in the win. But it was Jordan Poole, who broke out this season amid injuries to Curry and Thompson, who led the Golden State effort with 31 points, nine assists and eight rebounds off the bench.

Green drew a whistle for a foul late in the second quarter. Grizzlies forward Brandon Clarke jumped for a layup in the lane as Green contested. Green grabbed his jersey, and Clark fell to the court, prompting the whistle. 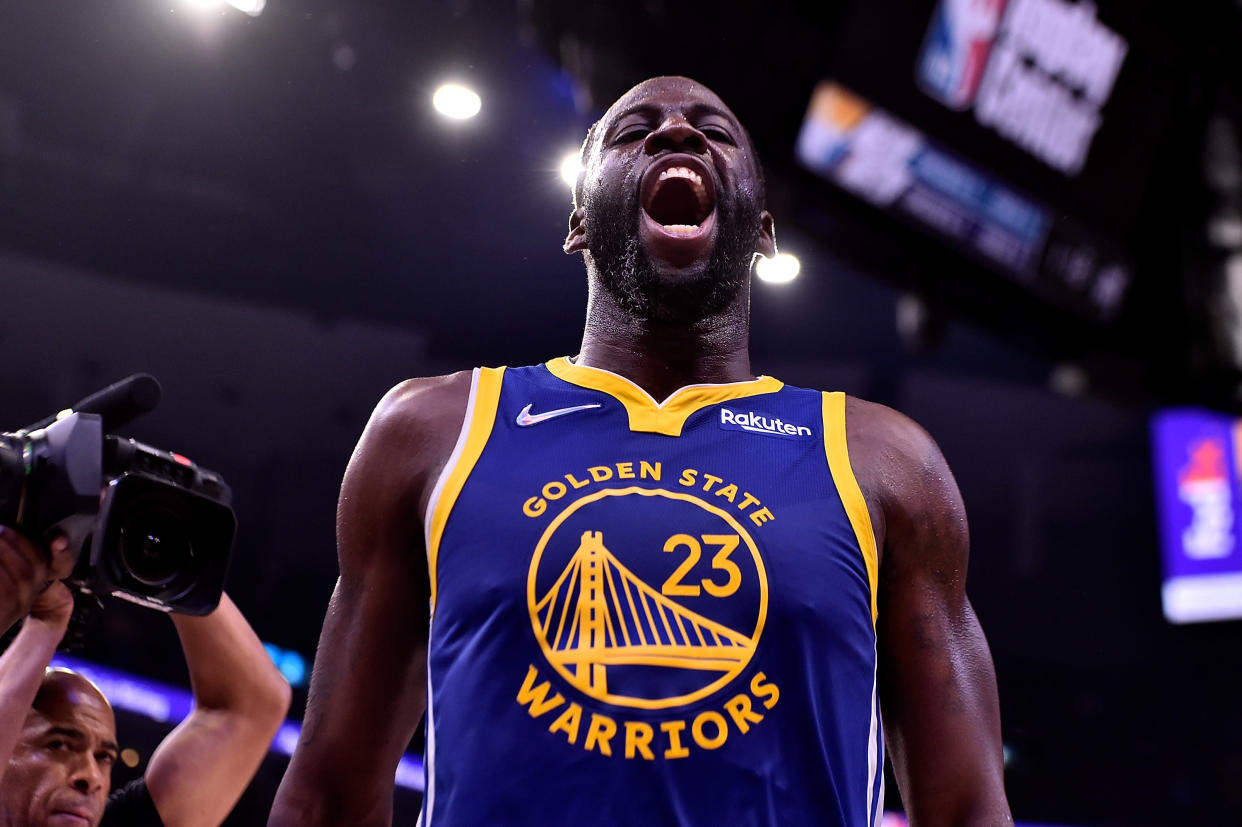 As officials reviewed the play to determine what level of foul to assess, Grizzlies fans chanted "throw him out."

Throw him out, they did. Officials assessed Green a flagrant 2 foul on the play, which meant an automatic ejection. Green got word of the ejection before officials announced it to the broadcast crew. He responded with a mock victory lap taunting the Grizzlies crowd before running to the Warriors bench to dap up his teammates. He then skipped to the locker room.

Draymond has been EJECTED!

Refs hit Green with a Flagrant 2 foul for this 👀

Green attempted to brace Clarke's fall on the play, and social media and the ESPN broadcast crew speculated that he would draw a flagrant 1 foul — a designation that doesn't come with an ejection. The more serious infraction arrived as a surprise. Another replay angle appears to tell the story.

Prior to the jersey grab with his left hand, Green swiped Clarke across the face with his right.

Draymond Green was hit with a flagrant 2 foul and ejected after this foul on Brandon Clarke.

The combination of the swipe and the jersey grab led to his ejection.

"After review, the foul has been upgraded to a flagrant foul penalty 2," referee Kane Fitzgerald announced after the replay review. "Draymond Green has been ejected for the windup to the face, impact to the face, the follow-through to the jersey and the throw-down to the ground."

Memphis led, 54-53 at the time of the foul with 1:18 remaining in the quarter. It extended its lead to 61-55 heading into halftime before the Warriors rallied in the second half.

After the game, Fitzgerald explained to pool reporter Damichael Cole of The Commercial Appeal why Green was ejected.

FITZGERALD: Because the contact in total was considered unnecessary and excessive which leads to a flagrant foul penalty two and ejection.

QUESTION: What did you see that made the call a flagrant two instead of a flagrant one?

FITZGERALD: Well, there’s a couple things. The first part was the wind up and significant contact to the face, and then the pull down from the jersey grab and throw down to the floor to an airborne vulnerable player makes that unnecessary and excessive. That’s what led to the flagrant foul penalty two.

Game 2 of the Warriors-Grizzlies series is scheduled for Tuesday night.