Victoria will need to find more than 10,000 extra early childhood teachers to deliver on its promise to expand kindergarten to all three- and four-year-old children but must reverse a nationwide exodus from post-secondary enrolments in early education courses to do so.

National data shows that the number of people enrolling in tertiary early childhood education courses has tumbled dramatically in recent years, adding pressure on a sector that is struggling to meet the demand for qualified staff. 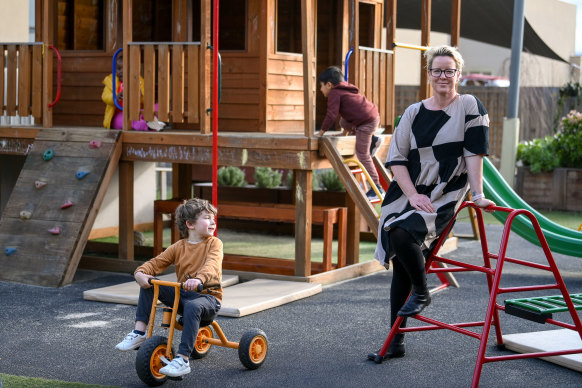 The latest national labour market figures project a 21 per cent rise in demand for early childhood educators by 2026, equating to 10,600 extra pre-primary teachers.

Victoria expects to have to expand its early education workforce by a similar number in the next decade to make good on its ambitious $9 billion expansion of kindergarten for all three- and four-year-olds.

Victorian Minister for Early Childhood Ingrid Stitt said this week the state would need 5000 additional teachers as the rollout of three-year-old kindergarten went statewide next year, and a further 5000 to 6000 teachers in the next 10 years for its pre-prep reforms, which would deliver 30 hours of kindergarten a week to four-year-olds.

“There’s no question we’ll have to build a strong pipeline of teachers and educators,” Stitt said.

The introduction of free TAFE courses in early childhood education had been successful in attracting new students, she said.

Last year, Victorian TAFEs enrolled 5526 people in free early childhood education courses. In 2019, when the courses were not free, about half that number were enrolled, at 2809.

The National Skills Commission has identified a nationwide shortage of early childhood educators, with employers continuing to have difficulty recruiting pre-primary school teachers.

The need to boost Australia’s early childhood education workforce is expected to be one of the key themes of next week’s jobs and skills summit.

Early learning workers are planning a nationwide strike on September 7 in a United Workers Union campaign for better pay and conditions.

Hicks, who sold the Cardinia Lakes Early Learning Centre in Pakenham in April, said many of her best teachers left the sector because they could earn more money as primary school teachers.

“You can have as many summits as you like, you can make TAFE free, but the problem is we want to not only attract the best and brightest, we want to retain them and retention is the problem,” Hicks said.

It’s like squeezing a lemon; you can only squeeze so much out.

“I’ve been in the sector for 21 years and the wages and conditions haven’t improved. We’re raising the quality of early education, which is needed, but nothing is being raised for educators. It’s like squeezing a lemon; you can only squeeze so much out.”

The annual award wage for a graduate early childhood educator is $66,395, compared with $74,976 for a graduate teacher in a Victorian government school.

The maximum award rate for early learning educators is $79,000, compared with $111,000 in Victorian government schools.